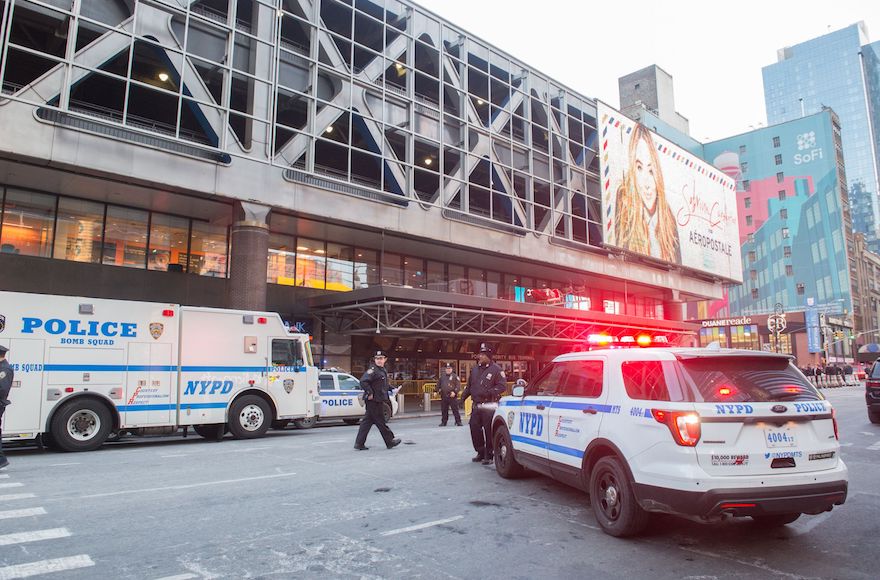 Police and other first responders at the Port Authority Bus Terminal in New York City after an explosion forced the hub to shut down, Dec. 11, 2017. (Bryan R. Smith/AFP/Getty Images)
Advertisement

(JTA) — An explosion at the Port Authority bus terminal in New York City called an “attempted terrorist attack” injured at least four people, including the suspected bomber, who is in custody.

The man had the explosive device, a crude pipe bomb, strapped to his body when it exploded Monday at around 7:15 a.m., causing burns to his abdomen and hands, The Associated Press reported. The New York Police Department’s bomb squad was deployed to the scene. Police and firefighters also were there, and the station was evacuated.

The explosive device was found on a subway platform, Fox News reported, citing police. It is believed the explosive did not detonate as planned.

The subway system is particularly busy during rush hour on a Monday morning, the start of the work week.

“This was an attempted terrorist attack,” Mayor Bill de Blasio told reporters more than two hours after the explosion.

“The terrorists did not win. We are going to keep being New Yorkers,” he also said. “Thank God the perpetrator did not achieve his ultimate goal.”

New York Police Commissioner James O’Neill said at the same news conference that the attacker had the bomb strapped to his body when it detonated, and suffered minor burns. The detonation took place in the subway in an underground passageway between Seventh and Eighth avenues on 42nd Street.

Asked by a reporter if the suspect had any connections to ISIS, O’Neill said the man “made statements,” but declined to be more specific.

New York City Police have identified the man in custody as Akayed Ullah, 27, a resident of Brooklyn. He is said to be of  Bangladeshi origin and has lived in the United States for the last seven years.

Update regarding explosion at 42nd St and 8th Ave, in subway: One male suspect is in custody. No injuries other than suspect at this time. Avoid the area. Subways bypassing #PortAuthority and Times Square Stations. Info is preliminary. pic.twitter.com/bEAdjq8mYc