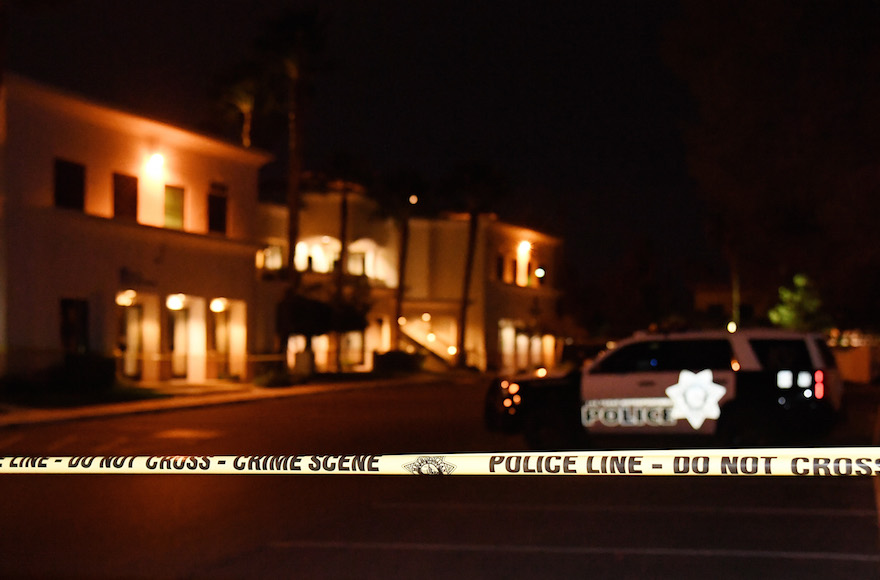 Police blocking off a parking lot at the Jewish Community Center of Southern Nevada in Las Vegas after a bomb threat, Feb. 27, 2017.(Ethan Miller/Getty Images)
Advertisement

(JTA) — The U.S. House of Representatives passed a bipartisan bill that increases the federal penalties for bomb threats and other credible threats of violence against religious institutions.

The bill, sponsored by Reps. David Kustoff, R-Tenn., and Derek Kilmer, D-Wash., passed Monday by a vote of 402 to 2. It was co-sponsored by more than 40 other lawmakers.

The Protecting Religiously Affiliated Institutions Act was sparked by a wave of threats against JCCs and other Jewish institutions earlier this year.

It would prosecute threats of violence against religious institutions as hate crimes and increase the penalty for destruction of the institutions’ property caused by fire or explosives from one year to three years. It amends the Church Arson Prevention Act to include community religious centers such as Jewish community centers.

In 2017, more than 160 bomb threats and other threats of violence have been made against Jewish community centers across the United States. Most of them came from a young Israeli man.

“The dramatic rise in threats against religious institutions is deeply disturbing and makes it clear that existing federal laws do not suitably deter these acts of hate,” Kustoff said in a statement. “We must stand united against acts of hate and protect the rights of all Americans to worship freely and without fear.”

The Muslim-Jewish Advisory Council praised the House’s passage of the bill.

“Crimes against religious institutions are intended to create an atmosphere of fear that deters community members from attending worship services and social involvement,” Stanley Bergman, the council’s co-chair, said in a statement. “These hate crimes pose a danger to the religious freedom and security of all Americans.”

Sens. Orrin Hatch, R-Utah, and Dianne Feinstein, D-Calif., have sponsored an identical bill being considered in the Senate.