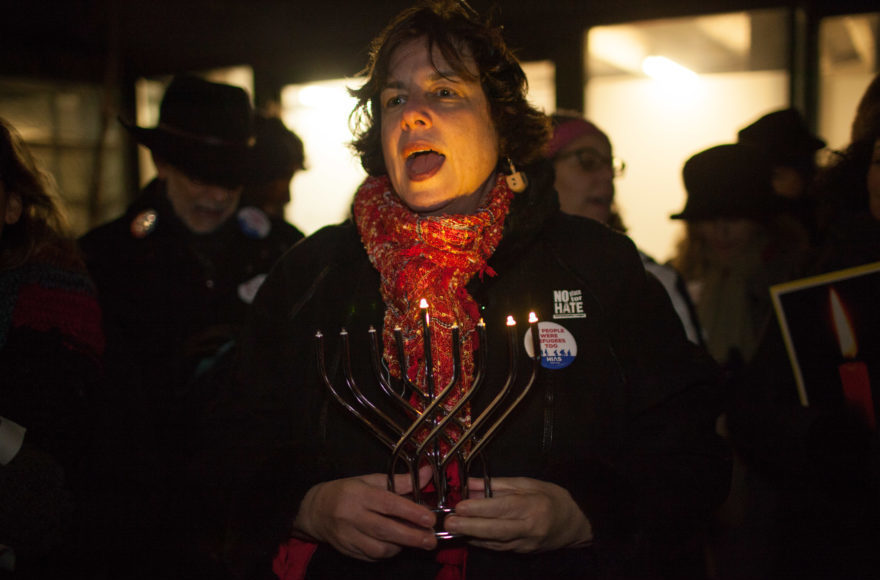 (JTA) — It would be reasonable to assume that the Jews lighting a Hanukkah menorah on the fifth floor of Trump Tower supported the president.

The front of the Midtown Manhattan high-rise, after all, bears his name in large gold letters, and the trash cans in its lobby are emblazoned with “Make America Great Again.” More than a year after the election, campaign gear is sold in the basement.

But the several dozen Jews who came together in the building Wednesday evening weren’t there to celebrate its namesake but to protest him.

Organized by T’ruah, the liberal rabbis’ human rights group, the protest was titled “Not the White House Chanukah Party.”

The president hosted his own Hanukkah party on Dec. 7, with a guest list notable for its omission of Democratic lawmakers and Jewish leaders who have objected to much of his domestic agenda. Some of them came to Wednesday’s protest instead.

T’ruah was able to use the building because a terrace on its fifth floor is technically a New York City public park open to anyone. All one needs to do is pass through security and go to the elevator, where a uniformed attendant will press the button for you.

The event itself was a relatively standard protest of Trump — with a Jewish holiday twist. There were songs (“Al Hanisim,” a Hanukkah prayer thanking God for miracles), chants (“More light, more justice!”), protest signs and snacks (fair trade Hanukkah gelt and decaf coffee). Nine leaders of liberal Jewish groups — including the Workmen’s Circle, HIAS, Jews For Racial & Economic Justice and Bend the Arc — spoke, then each held up a picture of a candle and lined up to form a human menorah.

“Tonight, I light this candle to banish the darkness that comes when power turns abusive, when sexual harassment and sexual violence put fear into our hearts and silence us,” said Dina Charnin, director of Israel policy and programs at the National Council of Jewish Women.

A handful of counterprotesters showed up on the terrace led by Karen Lichtbraun, head of the New York chapter of the far-right Jewish Defense League. She was wearing a camouflage Make America Great Again hat and called T’ruah anti-Semitic.

T’ruah, for its part, sees itself as articulating Jewish values in Israel and the United States. And while it didn’t stand with the president, exactly, it did stand in his building — at least for one night.