Trump administration: Western Wall will surely be a part of Israel 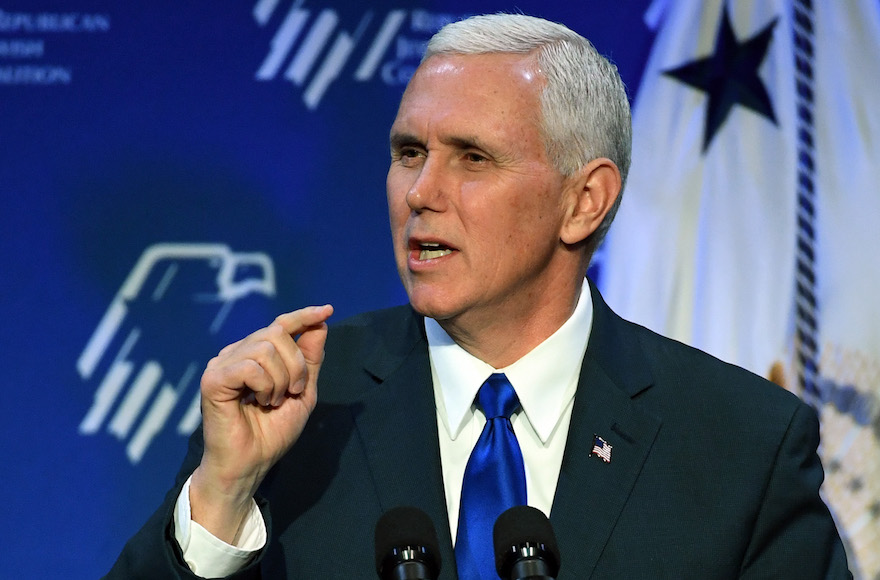 WASHINGTON (JTA) — The Trump administration said it cannot envision an outcome in which the Western Wall is not part of Israel — the first signal by any U.S. administration that it recognizes a claim to Jerusalem outside the 1967 lines.

Senior administration officials briefing reporters on Friday about Vice President Mike Pence’s visit to the region next week were asked whether Pence planned to visit the wall, as President Donald Trump had done during his June visit, and whether it would be an official visit, as opposed to Trump’s, which was private.

“We cannot envision any situation under which the Western Wall would not be part of Israel,” said an official, confirming that Pence’s visit would be in an official capacity. “But as the president said, the specific boundaries of sovereignty of Israel are going to be part of the final status agreement.”

A White House transcript of the call did not identify the senior administration officials.

Trump last week recognized Jerusalem as Israel’s capital, but also said he was not presuming an outcome of final status talks.

Israel captured eastern Jerusalem, including the Old City, in the 1967 Six-Day War.

The statement Friday was the first sign that any American president recognizes Israel’s claim to territory beyond the 1967 lines.

Pence’s tour of the region will include talks with Egyptian and Israeli leaders. Palestinian leaders are boycotting the vice president because of the Jerusalem announcement last week, which reversed decades of policy by U.S. presidents. Congress recognized “undivided” Jerusalem as Israel’s capital in 1995.

The Western Wall is the outer wall of the Second Temple, destroyed in 70 C.E., and its largest remnant. It is adjacent to the Temple Mount, the holiest site in Judaism, and currently home to Islam’s third holiest site. The mount is controlled in part by a Muslim religious authority.

The officials said Pence would press forward with the effort by Jared Kushner, Trump’s son-in-law and key adviser, to revive Israeli-Palestinian peace negotiations while cognizant that the Palestinians were in no mood to revive the talks after the Jerusalem announcement.

“So the vice president is going to reinforce the president’s bold, courageous and historic announcement regarding Jerusalem,” one official said. “As the president said, we remain dedicated to the peace process. We understand that the Palestinians may need a bit of a cooling-off period.”

In 2004, President George W. Bush said in a letter to then-Israeli Prime Minister Ariel Sharon that it was “unrealistic” to expect the sides to return to the 1967 lines, but also spoke about land swaps to compensate Palestinians for Israeli settlements, a position that the Obama administration also embraced.