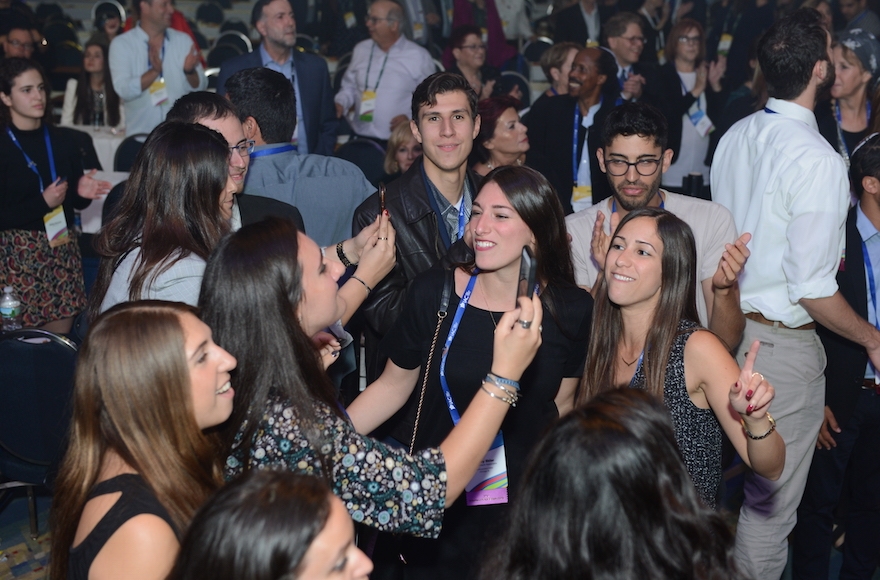 LOS ANGELES (JTA) — The Israeli-American Council’s Fourth Annual National Conference in Washington, D.C., held last month felt like a long-overdue family reunion. Enveloping warmth and a powerful sense of togetherness, the love for Israel was infectious, radiating to and from all the participants.

In the corridors of the Washington Convention Center, teenagers spoke with unique pride about their hybrid Israeli-American identity, rooted in the idea that they are deeply connected to their home in America while maintaining a strong affinity to their Jewish homeland in Israel.

Groups of Jewish-American and Israeli-American young professionals exchanged business cards and then headed to a packed dance floor, moving and shaking the steel floors of the convention center to the beat of Israeli music. A young Jewish couple —  the man from New York, the woman from Tel Aviv — joined with their 2-year-old and hundreds of other young families in a circle with picture books in Hebrew and English.

Groups singing Israeli songs blended with panel discussions about what it means to be Israeli and Jewish in America, centered around the idea that we were connected by the Israeliness in our character and the love for Israel in our heart. Many echoed the sentiment that Israeli Americans and Jewish Americans are one family, need each other and complement each other.

This sense of unity extended to the event’s political conversations. The politicians at the conference held views that spanned the ideological spectrum. They shared these radically different views on stage – in very frank conversations. All received thundering applause from the mixed crowd. In the many conference sessions and events, it was clear that Israeliness is a unifying force that can overcome political disagreements.

We live during a time of growing gaps and serious challenges in the Jewish community — both inside American Jewry and between Israel and the Diaspora. How do we address a declining Jewish population in the face of assimilation? How do we overcome divides among our different denominations, political orientations, ethnic backgrounds and geographic centers? How do we ensure that Israel is not a wedge that divides our community, but rather the glue that holds us together and strengthens us?

The nearly 3,000 participants in the Washington conference suggested the role that Israeli Americans can and do play as an important partners for American Jewish institutions in addressing these questions, and as a bridge builders to the State of Israel and its people.

There are three unique value propositions that Israeli Americans — and groups like ours that represent them — can bring to the table for the Jewish community.

The first is our Israeliness, a character and multifaceted quality that brings together many aspects of our identity: Jewish values, the Hebrew language, Israeli culture, pride in our history and heritage, the unique accomplishments of the Jewish people and the State of Israel, and above all, a belief that “All the people of Israel are responsible for one another.”

Through Israeliness, our community is bringing new people into our communal conversations and re-engaging others from a wide variety of backgrounds. We understand the importance of Israel not just as a vibrant country and proud culture, but as a crucial part of our spiritual beliefs as Jews. We speak Hebrew at home and at shul — the same language with two unique and intertwined purposes. Our community offers new ways to engage with Israel and Judaism itself.

The second value proposition is our deep love for Israel, rooted in personal experience and an appreciation that it is not just the homeland of the Jewish people, but a source of our pride, common history, culture, courage and strength. We recognize that Israel isn’t perfect but accept and support it without any preconditions.

As a result, Israeli Americans are uniquely equipped to advocate for Israel. The Israeli-American Council, for example, has worked to advocate for laws that keep states like California, Nevada and Texas from allowing taxpayer funds to support groups that discriminate against Israelis with economic boycotts. In partnership with existing organizations like AIPAC and Jewish federations, the Israeli-American Coalition for Action and the Israeli-American community have acted to advance bipartisan support for the Taylor Force Act, the Israel Anti-Boycott Act and other important pieces of legislation.

The third value proposition is our willingness and ability to think outside the box. Israeli Americans have much to learn from the American Diaspora community about how Jewish culture and community can flourish outside of a Jewish state. Yet we are also contributing fresh perspectives that have brought a range of programs to American Jewish life – initiatives that are engaging not only Israeli Americans, but also Jewish Americans of all ages.

By uniting Israeli Americans and partnering with existing Jewish-American institutions, we believe that we can strengthen the American communities we live in and build their connection to Israel. Our vision for the coming decades is optimistic: Where some see challenges and gaps, we see promise and opportunity to reignite Jewish life, re-inspire Jewish pride and courage, and re-imagine our existing institutions so that they serve the next generation in our community.

By working together as one big Jewish family, Israeli Americans and Jewish Americans of all backgrounds can forge the future we desire.

(Adam Milstein is a co-founder and the chairman of the board of the Israeli-American Council.)