The Sulzberger family: A complicated Jewish legacy at The New York Times 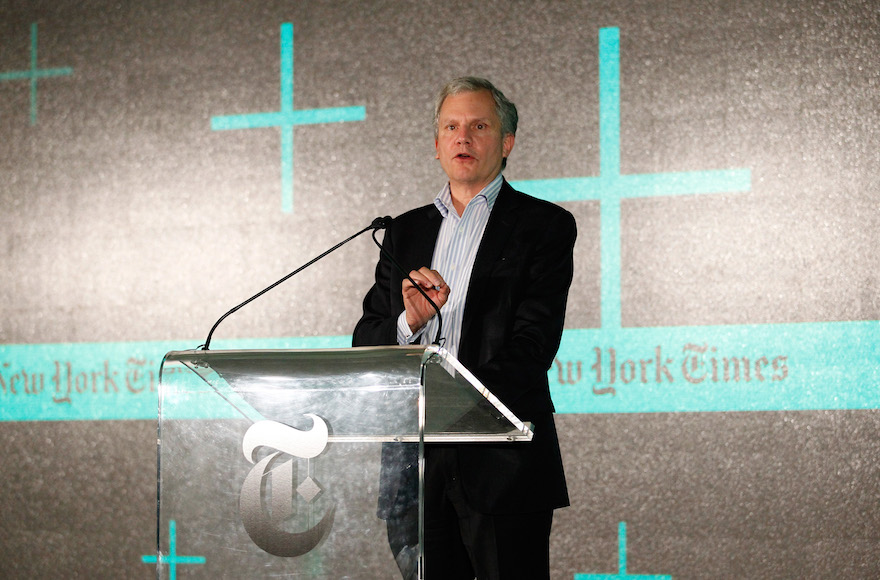 NEW YORK (JTA) — On Thursday, The New York Times announced that its publisher, Arthur Ochs Sulzberger Jr., 66, is stepping down at the end of the year and will be succeeded by his son, 37-year-old Arthur Gregg (A.G.) Sulzberger.

The familial exchange of power wasn’t unexpected. The younger Sulzberger is the sixth member of the Ochs Sulzberger clan to serve as publisher of the prominent New York newspaper. He is a fifth-generation descendant of Adolph S. Ochs, who bought the newspaper in 1896 as it was facing bankruptcy.

The family’s Jewish history — Adolph Ochs was the child of German Jewish immigrants — has often been the subject of fascination and scrutiny, especially during and after World War II, when the paper was accused of turning a blind eye to atrocities against Jews.

Today the family’s Jewish ties are less apparent than they were in the past. Arthur Ochs Sulzberger  Jr. was raised in his mother’s Episcopalian faith and later stopped practicing religion. He and his wife, Gail Gregg, were married by a Presbyterian minister. However, he has said that people still tend to regard him as Jewish due to his last name.

A look back into the family’s history shows why. Adolph Ochs, the original member of the Ochs Sulzberger clan, married Effie Wise, the daughter of Rabbi Isaac Mayer Wise, a leading American Reform Jewish scholar who founded the movement’s rabbinical school, the Hebrew Union College-Jewish Institute of Religion.

After Ochs’ death, his son-in-law, Arthur Hays Sulzberger, took over the reins at The Times. Sulzberger, a Reform Jew, was an outspoken anti-Zionist at a time when the Reform movement was still debating the issue. He and his family “were closely knit into the Jewish philanthropic world as befitted their social and economic standing,” wrote Neil Lewis, a former longtime reporter at The Times.

The owners drew criticism for the way the paper covered Jewish affairs, particularly the Holocaust. Critics said the newspaper failed to give adequate coverage to Nazi atrocities committed against Jews, a charge that The Times later owned up to. Arthur Hays Sulzberger had experienced anti-Semitism, and he was worried about his paper being perceived as too Jewish, Laurel Leff wrote in her 2005 book “Buried by the Times: The Holocaust and America’s Most Important Newspaper.”

In a 2001 article for The Times, former Executive Editor Max Frankel wrote that the paper, like many other media outlets at the time, fell in line with U.S. government policy that downplayed the plight of Jewish victims and refugees, but that the views of the publisher also played a significant role.

“He believed strongly and publicly that Judaism was a religion, not a race or nationality — that Jews should be separate only in the way they worshiped,” Frankel wrote. “He thought they needed no state or political and social institutions of their own. He went to great lengths to avoid having The Times branded a ‘Jewish newspaper.'”

As a result, wrote Frankel, Sulzberger’s editorial page “was cool to all measures that might have singled [Jews] out for rescue or even special attention.”

Though The Times wasn’t the only paper to provide scant coverage of Nazi persecution of Jews, the fact that it did so had large implications, Alex Jones and Susan Tifft wrote in their 1999 book “The Trust: The Private and Powerful Family Behind The New York Times.”

“Had The Times’ highlighted Nazi atrocities against Jews, or simply not buried certain stories, the nation might have awakened to the horror far sooner than it did,” Jones and Tifft wrote.

In 1961, Arthur Hays Sulzberger stepped down as publisher, three years after having suffered a stroke, giving the position to his son-in-law Orvil Dryfoos. Dryfoos died two years later from heart failure, so his brother-in-law Arthur “Punch” Ochs Sulzberger took over. Arthur Ochs Sulzberger, who died in 2012, identified as “nominally Jewish, although not at all religious.” He was “much more comfortable with his Judaism” than his father, wrote former Times religion reporter Ari Goldman. Still, stories related to Jewish topics were carefully edited, said Goldman, who worked at the Times in 1973-93.

“Those stories got a little more editorial attention, and I’m not saying they were leaning one way or another, but the paper was conscious that it had this reputation and had this background and wanted to make sure that the stories were told fairly and wouldn’t lead to charges of favoritism or of bending over backwards,” ” he told JTA on Monday.

Nevertheless, given its owners’ family history, its disproportionately large Jewish readership and its frequent coverage of Jewish preoccupations, The Times is often regarded as a “Jewish newspaper” — often disparagingly so by anti-Semites.

And that family history lives on. A.G. Sulzberger is part of a generation at the paper that includes his cousins Sam Dolnick, who oversees digital and mobile initiatives, and David Perpich, a senior executive who heads its Wirecutter product review site. Dolnick’s mother, Lynn Golden, is the great-great-granddaughter of Julius and Bertha Ochs, the parents of Adolph S. Ochs, and was married in a Chattanooga, Tennessee, synagogue named in their memory. Perpich, a grandson of Arthur Ochs Sulzberger, was married by a rabbi in 2008.

A.G. Sulzberger is best known for heading a team that in 2014 put together a 96-page “innovation report” that meant to prod The Times into moving more rapidly in catching up with the new digital media landscape. Asked recently about his working relationship with Dolnick and Perpich, A.G. Sulzberger spoke of their strong journalism backgrounds and invoked the family ethos.

“If they weren’t members of the Ochs/Sulzberger family, our competitors would be bombarding them with job offers,” he said. “But they are deeply devoted to this place, and the three of us are committed to continuing to work as a team.”