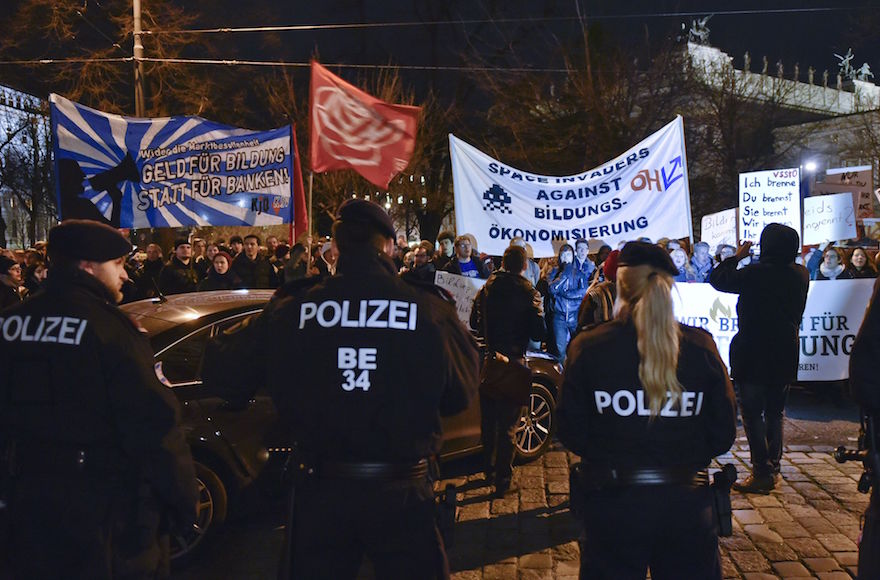 VIENNA (JTA) — Like Germany’s governments, those of neighboring Austria have acknowledged their country’s role as a chief perpetrator of the Holocaust.

Since the 1990s, Austrian officials have faced up to and condemned how their countrymen and authorities supported Adolf Hitler, an Austria native, and his war of annihilation against Jews.

Yet in spite of this increased sensitivity, nationalism with Nazi roots is making a comeback in Austria: The far-right Freedom Party, or FPO, which was founded in 1956 by a former SS officer, on Sunday became the only coalition partner of Chancellor-elect Sebastian Kurz’s People’s Party. Kurz ignored the calls by local Jews to drop FPO.

Amid the ascendancy of far-right populism across Europe, its revival in Austria is seen as particularly alarming, suggesting to many Jewish leaders and liberals a failure by society to learn from its recent history. After all, if a country that does nearly everything “right” when it comes to Holocaust education can’t inoculate itself from the darker maladies of European history, watchdogs have begun asking, what hope is there for other countries in the region, such as Hungary and Poland, which face rising nationalism amid complicated reckonings with their own Holocaust legacies?

In the early 2000s, the Austrian government finally dropped the claim that the country was mostly a victim of German Nazism, citing “the special responsibility imposed on Austria by its recent history.” Teaching about the Holocaust became mandatory, with visits to former death camps and teacher training in Israel.

The Austrian state has paid nearly $1 billion since 2005 in compensation to Holocaust victims, and since 2012, Holocaust memorial projects have popped up at an unprecedented rate. They include the opening of a learning center at the former death camp Mauthausen, a monument for Vienna’s deported Jews and an international exposition, commissioned by the national railway firm, on its role in the murder of some 65,000 Austrian Jews.

Despite these trends, the FPO garnered 26 percent of the vote in October’s general elections with a platform that denounced “forced multiculturalism, globalization and mass immigration.” The coalition deal puts FPO, which claims it does not condone anti-Semitism but whips up popular sentiment against Muslims, in charge of two key ministries, the Interior and Foreign offices.

This is the second time that FPO has joined the government; it was part of the coalition in 2000. Austria will be the only Western European country with a far-right party in government.

The European Jewish Congress has expressed “grave concern” over its inclusion, citing what it called FPO’s “long history of anti-Semitism and xenophobia.”

Experts on Austria say the rise of its xenophobic far right is connected to fears over Muslim immigration, as well as a perceived need to protect the nation’s sovereignty from an increasingly interventionist European Union. But they also blame the Austrian government, which before reckoning with the Holocaust deflected its guilt for decades and failed to purge Nazi supporters from positions of influence.

Unlike neighboring Germany, Austria did not have an organized, judicial denazification effort in the aftermath of World War II. In fact, no one has been convicted of Nazi war crimes in Austria in more than 35 years.

“In Germany, and quite a few of the countries that were under Nazi occupation, many people involved in Nazism were convicted or at least not permitted to be civil servants, teachers, police officers, etc.,” said Tina Walzer, a Vienna historian. “But this has never happened in Austria and we are witnessing the results of this crucial difference.”

This has entrenched populist ideas in a way that has seemed resistant to increased Holocaust awareness.

“When you look at the population as a whole, you don’t feel there has really been a change,” said Milli Segal, founder of the newly opened For the Child museum in Vienna honoring the young Holocaust refugees who fled to Britain through an arrangement known as the Kindertransport.

“Well, there’s change, but in very, very small steps,” she added after a pause. “It makes you feel voiceless.”

Segal also noted how in 2000, thousands of protesters gathered in Vienna to demonstrate against the FPO joining the government. There were protests against the party again in this capital city last month, “but there were just a few hundred,” she noted.

Philip Carmel, a former policy adviser for the European Jewish Congress, also noted the difference between then and now. The last time that “the fascist FPO joined the government of Austria,” he wrote on Facebook, “the EU imposed sanctions on Austria and the Jewish world pretty much boycotted the country. Today, silence.”

Many in Austria share Segal’s feeling of powerlessness over the Freedom Party’s success. Its strong showing in October followed an even greater electoral feat in last year’s presidential elections in which the party’s candidate, Norbert Hofer, won 49.7 percent in the first round of voting. Hofer lost in the second round to the left-leaning Alexander Van der Bellen, 53 percent to 46 percent.

The Freedom Party, for its part, rejects claims that it plays on Nazi and other racist sympathies. Party leader Heinz-Christian Strache has vowed to kick out members caught engaging in racist rhetoric, and indeed has done so to a former lawmaker who supported online the assertion that “Zionist money-Jews worldwide are the problem.”

The Jewish community in Vienna considers the Freedom Party a racist entity, according to Oskar Deutsch, the community leader, who has called on Kurz to prevent the party from reaching power.

“It’s a facade,” Deutsch told JTA of Strache’s statements against anti-Semitism and racism. “Despite this talk, they position themselves as the go-to address for people with Nazi sympathies.”

Deutsch said his community will not boycott ministries headed by FPO.

“The Jewish community needs to work with whoever’s in government,” he explained.

A case in point: On Nov. 9, when the outgoing chancellor, Christian Kern, spoke in parliament to commemorate the 79th anniversary of Kristallnacht — a series of 1938 pogroms that the Nazis carried out in Germany and Austria — the Freedom Party’s lawmakers were the only ones who demonstratively did not applaud.

“These subtle signs are how they signal and excite their supporters,” Segal said. “If the Freedom Party will be part of the government, it will become difficult to commemorate the Holocaust in the same dignified way that we have now in Austria.”

The dissonance between Austria’s Holocaust commemoration efforts and the far-right’s popularity can be unsettling.

On Oct. 19, for example, a Vienna city official inaugurated a Holocaust memorial installation outside the Herminengasse subway station, near an alley in which the Nazis imprisoned hundreds of Jews during the war. From there they were taken to be deported as non-Jewish locals watched from their balconies.

The inauguration ceremonies were held during election season. A giant poster hung nearby showed a smiling Strache bearing the slogan “Fairness.”

Does the Freedom Party’s recent success suggest that such commemoration projects are ultimately failing to make a difference politically?

“You might say so,” Deutsch said. “But the Jewish community will not remain silent.”

To Efraim Zuroff, a hunter of Nazis and historian for the Simon Wiesenthal Center who is based in Israel, the success of the far right in Austria reflects how Holocaust commemoration projects in urban areas hardly reach people who live in smaller towns — the Freedom Party base.

“Holocaust education, which only recently really began developing in Austria, happens there in pockets — in the big cities, in the artists’ scene,” he said. “It has big visibility but isn’t penetrating the way it has in Germany, where the effort was much more robust.”

Zuroff said this has a lot to do with Austria’s failure to prosecute Nazis.

“Holocaust education efforts in Austria are having limited impact because they are done in two voices,” he said. “There was a belated admission of guilt by politicians. But the judiciary, whose work sends a much stronger message in society, was a total failure.”

To some activists against racism, the Freedom Party’s rise is motivation to invest even greater efforts in Holocaust commemoration.

The far-right’s success in Austria “only strengthens our resolve,” said Brigitte Prinzgau, an artist who designed the newly inaugurated Aspang Railway Station Memorial, near where 47,035 Austrian Jews were dispatched from Vienna to death camps. “Now educators and artists will make even more monuments confronting fascism and xenophobic populism.”