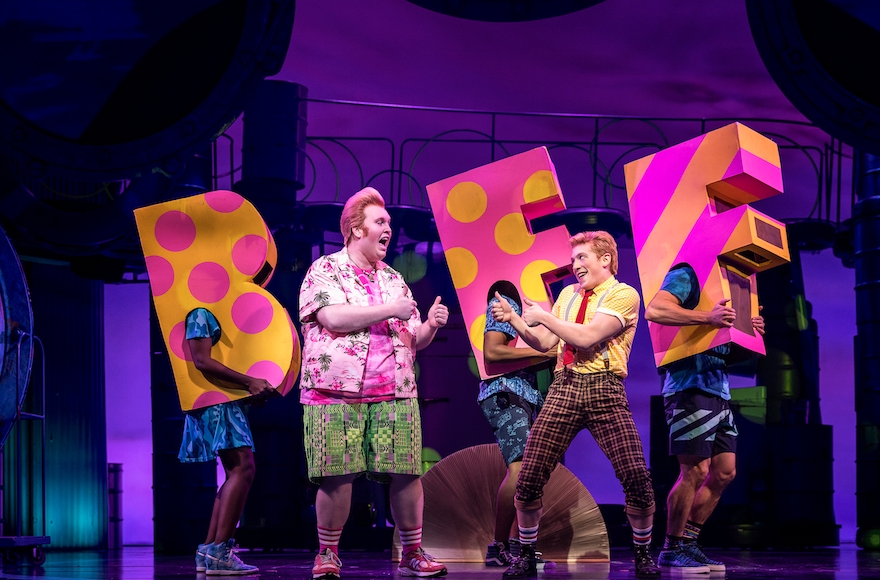 NEW YORK (JTA) — There’s a new star on Broadway and his name is — wait for it — SpongeBob SquarePants.

“SpongeBob SquarePants: The Musical” opened earlier this month to rapturous reviews. And no one collected higher praise than the title character, played by Ethan Slater, a graduate of Ramah summer camps.

For those unfamiliar with Nickelodeon’s long-running animated kids’ show, SpongeBob is — spoiler alert! — a sea sponge who lives in a pineapple in the undersea community of Bikini Bottom. An eternal optimist, he’s a cook at the Krusty Krab (Eugene Krabs, proprietor), has a host of friends including a starfish (Patrick Star), a squirrel (Sandy Cheeks) and a squid (Squidward Q. Tentacles). Also in town: the less-than-virtuous Plankton (real name Sheldon).

“SpongeBob SquarePants: The Musical” is a genuinely fascinating confection that will warm and win the hearts of, well, anyone with a heart. At its center is Slater, 25, who has been involved in the production for five years. His story is instructive in the way Broadway musicals work today — as well as the roles that both fate and family can play in shaping one’s career path.

Slater grew up in a Conservative Jewish household in suburban Washington, D.C. His father, Jay, is a doctor who works for the Federal Drug Administration and his stepmom, Ellen Goldmuntz, works for the National Institutes of Health. The family belonged to Ohr Kodesh, the Conservative synagogue in Silver Springs, Maryland, where Slater had his bar mitzvah.

He attended the Charles E. Smith Jewish Day School through middle school, and while he attended a secular high school, Slater continued to take classes at Shoresh Hebrew High, affiliated with Ohr Kodesh and co-founded by his dad. 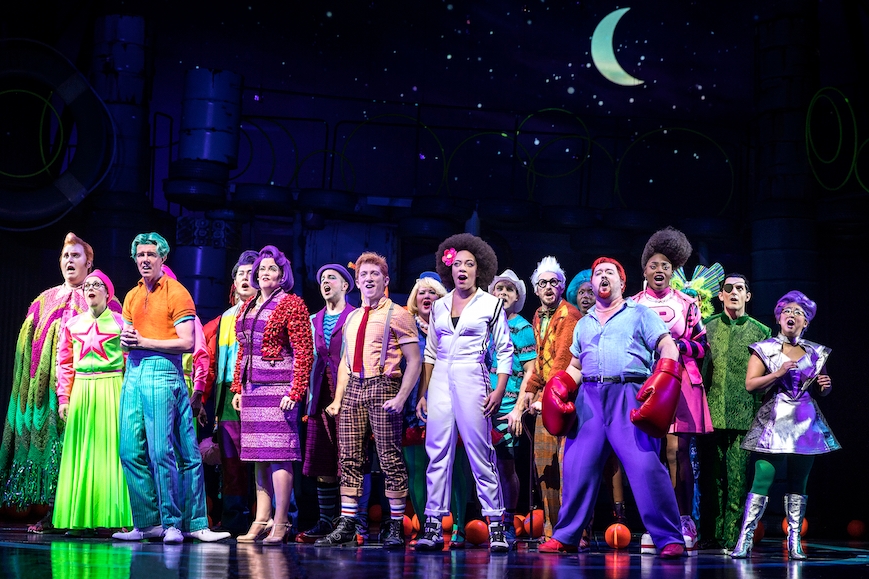 The company of “SpongeBob SquarePants: The Broadway Musical” (Joan Marcus)

Asked how his Jewish upbringing impacted his career, Slater said it has informed “every aspect” of his life — including his childhood summers.

Slater attended Camp Ramah in New England because his dad was the camp doctor.

“I went there originally as a staff brat, but stayed on until I was 16,” he said.

Like many Jewish camps, arts and music are major parts of the Ramah experience. But perhaps there is something unique to Ramah’s programs: Two other Broadway stars are alumni of the Conservative movement’s camping network. Ben Platt recently completed his Tony Award-winning run in “Dear Evan Hansen,” which also won the Tony for best musical, and Cassie Levy will play Elsa in the Broadway adaptation of “Frozen” that opens in March.

For his part, Slater started acting and singing as a kid, and never really had a Plan B.

“I know that my father was a little nervous about me pursuing a career in the arts,” he said. “It was actually at his suggestion that I go to a liberal arts college as opposed to an [acting] conservatory.”

And, yes, he took a number of political science courses, just in case there was law school in his future. But that never happened. Instead, as a sophomore at Vassar College, Slater auditioned for a show — one that was decidedly not about a sea creature.

However, “it just so happened the audition was being run by the same casting director who was working on what was then called ‘The Untitled Tina Landau Project,'” Slater explained.

Landau, an accomplished theater director, had already been working on a SpongeBob project for five years — during that time, the cost of  opening a show on Broadway has skyrocketed. And while Nickelodeon execs had visions of “Lion King” dancing in their heads, they were mindful that not all pop culture adaptations become hits. (Does the name “Spider-Man” ring a bell?)

The show’s casting director saw something he liked in Slater and called him two weeks later about an opportunity — without disclosing what it was.

“From the sides [pages] and scenes he sent me, it became clear that it was SpongeBob,” Slater said.

“I didn’t watch the show much,” Slater admitted. “I grew up without cable, so I didn’t have a lot of memories. I first watched it at my bubbe’s house.”

Fortunately, thanks to grandma, Slater’s peripheral knowledge of Bikini Bottom and its denizens helped convince Landau that he was her ideal SpongeBob.

“At the time there was no script, no music,” he said. “We were just messing with these characters to see if can make them fun.”

There were a series of workshops, held over summer and winter breaks, so as not to interfere with Slater’s studies. Slater was about two years into the project when he was was told “if the show moved forward, I was the guy — which was a relief,” he said.

“Of course, there was no guarantee we were going to move forward. The only reason to bring it to Broadway was if it was something new and innovative theatrically, not to do it just to do it.”

It was sentiment Nickelodeon heartily endorsed: If the network was going to invest a reported $20 million or so, the show needed to be perfect.

The team made a number of fortuitous choices, such as having the actors project their characters’ essences and not simply copy their cartoon counterparts.

“I didn’t want to be doing an impression,” Slater said. “It was important to me and Tina that we weren’t just copying.”

So instead of wearing a boxy yellow costume, Slater dresses in colorful plaid slacks and a bright checkered yellow shirt. He retains SpongeBob’s walk — more a sashay, really — which is greeted by cheers from the audience as he crosses the stage the first time.

The show’s plot crosses age lines. At its simplest, a volcano threatens to engulf Bikini Bottom. Sandy the squirrel comes up with an innovative (and scientific) way to vent the volcano, but it is rejected by the community in favor of a simpler but fake solution offered by Plankton, which involves hypnotizing everyone in town.

The community rallies against Sandy, soon sporting “Mammals Go Home” signs. And while the play wasn’t intended as a political statement, as it has developed over the years and the political situation in the U.S. has changed, the anti-science, anti-almost-everyone aspect obviously took on new (and adult-like) resonance.

Potentially dark undertones aside, Slater considers himself an optimist — and said he’s become one even more since since his involvement with the production began.

“I’ve grown to be more like the character in the sense that every day when I wake up, I feel I’m happy and it’s going to be the best day of my life,” he said.

“I think I’m a little less naive than SpongeBob can sometimes seem to be,” he added, “but I would also say I appreciate the similarities more than I do the differences.”