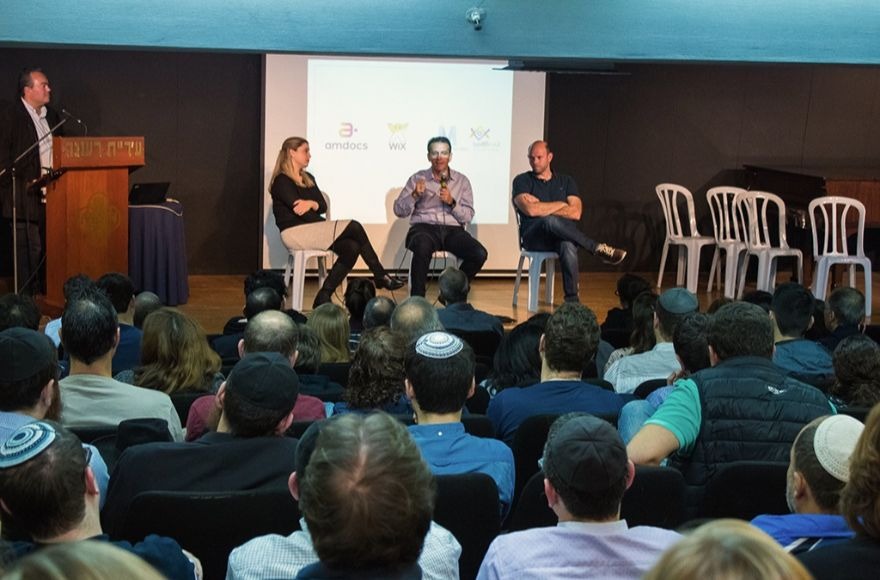 New immigrants to Israel from Brazil get advice from fellow countrymen who came before them about finding jobs in the high-tech industry. (Tatiana Nunes Fajngold)

RAANANA, Israel (JTA) — The Israeli city that is home to the country’s largest Brazilian community hosted a pioneering event to boost the professional network in the high-tech industry for immigrants from Latin America’s largest country.

Some 150 people attended the first “From Brazilians to Brazilians,” an event held here Wednesday featuring lectures and panels provided by Brazilian expats who have overcome the difficulties of immigrating to a foreign country and built a solid career in major high technology companies, as well as some of the most promising startups in Israel.

“The goal is to foster the personal and professional networking, facilitate the insertion in the high-tech environment, minimize cultural shock and, why not, share hot tips to fill in the best available job opportunities in the market,” Sandro Maghidman, co-organizer of the event, told JTA.

A debate covered human resources topics including organizational climate, career development, and balance between personal and professional lives, as well as cultural ones such as how to understand and acquire the Israeli audacity known as chutzpah as a key strategy to belong more and more to the Israeli work environment.

“Olim chadashim [new immigrants] arrive in Israel without a network of contacts,” innovation specialist Luna Edelstein Froumine told JTA. “They have no school friends, no college buddies, no cousins who work here and there. They need to build a network from scratch. This event comes exactly to fill in this gap.

“I have been in Israel for nine years and it took me so long to build my network. It’s a privilege to share our knowledge with other Brazilians,” added Froumine, who works for Israeli software giant Amdocs, the company that hires the most immigrants in the country.

The event was organized by Kehila Chaverim, a web-based group of Brazilian friends with nearly 500 followers that aims to support the absorption of Brazilian immigrants in Raanana and neighboring cities. The region is home to some 220 Brazilian families and receives 25 percent of all immigrants from the Latin American nation, according to the Jewish Agency.

“It’s exciting to see this growth of Brazilian immigration, which brings with it interesting talent for the whole country and especially for the technology industry,” said entrepreneur and investor Michel Abadi, who presides over Beit Brasil, the first nonprofit organization to assist Brazilian aliyah. “I am happy to contribute and help this movement to highlight the unique skills of Brazilians professionals.”

Brazil is home to some 120,000 Jews and Israel is home to some 12,000 Brazilians. By the end of the year, more than 900 Brazilians are expected to make aliyah, according to the Jewish Agency, a number that ranks Brazil for the first time ahead of the United Kingdom as the fifth country to send the most Jews to Israel after Russia, Ukraine, France and the United States.