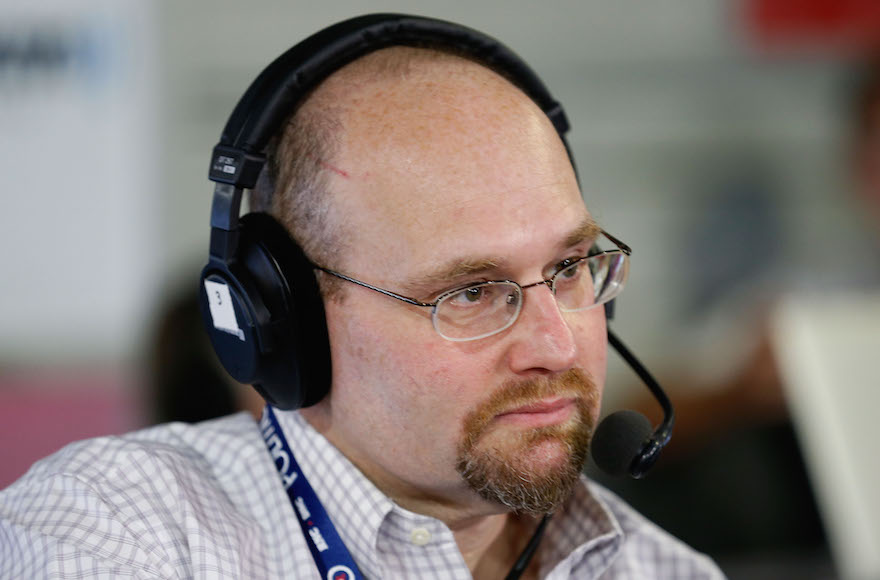 Glenn Thrush on an episode of "The Press Pool" at Quicken Loans Arena in Cleveland, Ohio, July 20, 2016. (Kirk Irwin/Getty Images for SiriusXM)
Advertisement

The Times said on Wednesday that Thrush will be suspended until late January and then return to work. However, the paper said Thrush, who was its prominent Washington, D.C., correspondent, will no longer be covering the White House.

The Times conducted an investigation that found that the Jewish reporter had “behaved in ways that we do not condone.”

“While we believe that Glenn has acted offensively, we have decided that he does not deserve to be fired,” said Times executive editor Dean Baquet, adding that Thrush was receiving counseling, including for substance abuse.

Last month, The Times said that it was looking into allegations made by four women that Thrush made sexual advances, including kissing and touching them.

The allegations were published in a Vox article. The women making the allegations include Laura McGann, the author of the article, as well as three unnamed women. Three of the incidents took place while Thrush was working at Politico, while one was during Thrush’s tenure at The Times, according to the allegations.

McGann wrote that the other women, all in their 20s, had similar experiences, “from unwanted groping and kissing to wet kisses out of nowhere to hazy sexual encounters that played out under the influence of alcohol.”

Thrush claimed that his encounter with McGann was consensual but apologized for an incident with one of the unnamed women. He said he had been struggling in recent years with alcoholism in response to personal and health crises.

The accusations are the latest in a flood that has roiled the worlds of entertainment, politics and the media since last month after dozens of women alleged that Hollywood movie mogul Harvey Weinstein harassed and in some cases assaulted them.