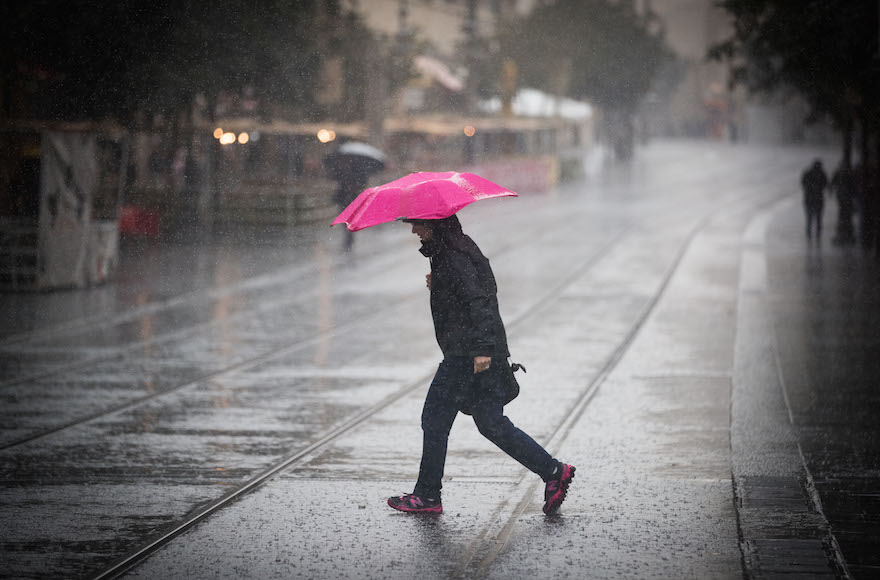 JERUSALEM (JTA) — It started raining on Sunday in Israel. It poured, really. To the point in the middle of the night where some of us thought that our roofs would start to leak. It’s at that moment that one kind of wishes that the rain would stop. But you can’t wish that. Because Israel really, really needs the rain.

Twenty-four hours after it started, the rain stopped. The clouds rolled away and the sun started shining.

And it is really beautiful. You breathe a sigh and enjoy the moment. But then you remember that it is winter — and Israel really, really needs the rain.

This year is shaping up to be the fifth drought year in a row and, according to some experts, the worst drought season in 40 years.

The country has received just 45 percent of its multiyear average rainfall for September through November. It has only rained twice in December, and the 10-day forecast looks pretty sunny.

So what can a little country do?

Agriculture Minister Uri Ariel of the Jewish Home Party last week called for a prayer rally to be held at the Western Wall in order to bring rain to the country. Thousands attended the rally on Thursday.

“I call on the public to participate in this event on the 10th of Tevet,” he said in an announcement, “and to bring umbrellas, because together we will tear open the gates of Heaven.”

The 10th of Tevet already is a fast day on the Jewish calendar, marking the day that the army of Babylonian emperor Nebuchadnezzar laid siege to Jerusalem. So religious Jews consider it an appropriate day also to beseech God for rain.

Some in Israel have criticized the agriculture minister for relying on prayer to bring water to the country, calling it voodoo, or state-sponsored prayer by what is meant to be a secular government. But Ariel has met his critics head on, basically saying it can’t hurt, and it could help.

He also pointed out that his ministry and others have been working diligently to find new water sources for the country.

“I am someone who doesn’t rely on miracles and does everything I know as agriculture minister, together with the energy minister and finance minister, to find a solution to the water crisis,” he said in an interview with Ynet.

Among those efforts, he said, are drilling for underground water sources in the Golan Heights and the Galilee, building additional desalinization plants in various parts of the country, and conducting agricultural research to create plants that require less water.

To those who say the rally amounts to state-sponsored prayer, Ariel says: if you don’t believe in it, don’t come to the rally.

This is not the first time that a prayer rally has been held to bring rain to Israel. In fact, in four of the last eight years, the Chief Rabbinate has held prayer rallies for rain.

Rain is so important to Israel that there are special Hebrew words for the first and last rainfall of the year: “Yoreh u malkosh.” Yoreh is the first rain of the season, and malkosh is the last. These words are part of the Shema prayer.

And there are many regular prayers for rain throughout the year. The end of Sukkot features a special prayer service for rain, which asks God for enough rain, or a rain of blessing, but not too much rain that would cause damaging floods and mudslides. There also is a prayer for dew at the end of the rainy season, because even those small amounts of moisture are helpful to plant and animal life in Israel. Short summaries of the invocations for rain and dew are part of the daily silent Amidah prayer as well.

Earlier this month, Israel’s Chief Rabbi called on the public to add an additional prayer for rain to their daily prayers, one that traditionally is put into usage when there is a drought.

As for the weather, forecasts are showing a chance of showers on Sunday and Monday.