The new tax law lets you use college savings for Jewish day school. Here’s how it works. 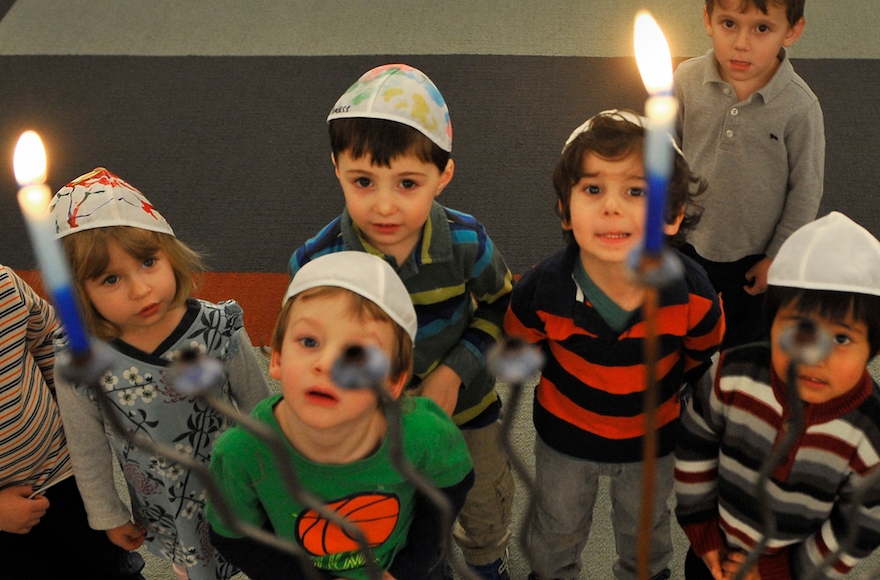 A view of some Jewish pre-schoolers in Washington, D.C., getting ready for Hanukkah. (Mark Gail/The Washington Post via Getty Images)
Advertisement

WASHINGTON (JTA) — When the new tax bill was signed into U.S. law by President Donald Trump on Dec. 22, an unexpected constituency benefited: parents who send their kids to Jewish day schools.

Until now, the college savings plans known by their tax codes, 529s, could only be used for college tuition. But effective as of Jan. 1, up to $10,000 may be withdrawn annually from the tax-free plans to help pay for private school.

Parochial schools have celebrated the change. While Catholic school advocates led the lobbying for the tax break for private schools, Orthodox Jewish umbrella bodies also were involved in advocating for the move. At the same time, however, proponents of church-state separation have decried the provision as chipping away at support for public schools.

Experts are still not sure whether the new provision will have much of an impact. On the one hand, day school parents in some states now have an opportunity to save hundreds of dollars a year in tax breaks. On the other hand, the 529 system was designed for long-term savings and may not be the best vehicle for frequent withdrawals.

This is what we know so far.

Anyone who is paying or contributing to a private school education.

“It will assist people in the middle class of the Orthodox community who are already struggling with their economics generally and paying for education as part of that,” said Nathan Diament, the Washington director of the Orthodox Union, which lobbied for the change.

The way 529s are set up, contributions are not tax deductible from federal taxes, but the earnings are. In addition, 35 states offer state income tax exemptions on contributions — generally between $2,000 and $10,000 a year, and depending on whether the contributor is an individual or a couple.

This means that in some states, private school parents (and grandparents) score twice: a state income tax exemption on up to $10,000 being put into the plan and a $10,000 exemption on the withdrawal. The state income tax exemption, when applicable, creates an immediate tax break for contributors, even if they don’t keep the money in long enough to benefit from the federal tax break on accrued earnings.

Jewish day schools are heavily concentrated in the Northeast and states there vary widely in their tax policies. New York, for instance, offers the $10,000 tax deduction; New Jersey offers none. State chapters of the Orthodox Union and Agudath Israel of America, umbrella bodies for Orthodox groups, are lobbying for more generous state-level 529 benefits.

This is a windfall for day school parents, right?

Not necessarily. The state savings typically amount to hundreds of dollars. Say a state taxes income at 8 percent and allows tax exemptions on up to $10,000 — that’s $800 in savings per child.

The federal tax savings on revenue depend on the parents and their personal circumstances.

“These are the kind of questions parents have to discuss with personal financial advisers and accountants,” Diament said.

With tuitions at private colleges reaching as high as $70,000 a year, there may not be enough of an incentive to divert money to day school tuition. Money for a university accrues interest for 18 years if parents open a 529 when a baby is born. A New York Times projection said parents dumping an admittedly hefty $200,000 into an account when a baby is born and doing nothing would have more than $370,000 to spend come college time.

Accordingly, day school investments inherently will accrue less interest: If you open a 529 when a child is born, you’ll be making withdrawals when she is 5 or 6 years old. Parents with kids already in the day school system — and who have opened 529s, carefully planning to cover college tuition — may be less inclined to divert funds to day school tuitions. Parents of newborns may have a greater incentive to open a 529 now and accrue some tax-free interest in the next five years or so.

Additionally, parents planning for an 18-year haul can afford riskier investments — and potentially greater returns — than parents who will want to start cashing in their investments within five or six years.

“If you’re putting money into a 529 for elementary or high school expenses you need to carefully consider your time horizon,” Young said. “If you have a longer time horizon, you can be more aggressive.”

Noam Neusner, a communications adviser who worked on tax policy for the George W. Bush administration, suggested grandparents could use the new break as a means of encouraging their children to go the day school way.

“If you’re a grandparent contributing to a child’s day school tuition, this provides a way to ensure you can continue to support that investment into the future, regardless of if you’re alive,” he said. “You designate funds for the 529, and ensure that your grandchild has funds for future years in day schools.”

Tax experts have speculated that in much the same way that universities have tailored tuitions to gobble up tax breaks, the same could happen at the day school level.

But Jewish day school officials say that’s unlikely among their schools, which are striving to persuade more parents to make the day school commitment. They would rather use the new rule as an enticement to parents to sign up their kids rather than a new avenue for revenue, officials said.

“Schools are already under pressure since the recession started [in late December 2007] to hold the line on tuition,” said Dan Perla, the director of financial vitality for Prizmah, a new umbrella body for Jewish day schools.

If this is a victory for those who believe in “school choice,” does this mean it’s a loss for public education advocates?

The groups that lobbied for the change made no secret of a broader agenda: to chip away at long-held trends in American law that balk at public funding of religious institutions.

In an online statement, Agudah calls the provision “a significant, symbolic, national school-choice victory” even if its benefits do not immediately accrue day school families who choose not to open 529s.

Orthodox groups have welcomed the emphasis by the Trump administration and its education secretary, Betsy DeVos, on funneling more federal funds to private schools, including religious schools.

That’s why the the fight isn’t over.

Having lost the battle on the federal level, secularists, church-state separationists and public education advocates are likely to push back on the state level — meaning they may fight to adjust local laws in order to counteract the new provision.

But the Orthodox umbrella bodies are ready for the fight.

“We’ve already had a meeting of state directors to fend off any challenges,” said Abba Cohen, Agudah’s Washington director.

Perla of Prizmah said he did not anticipate too much pushback from state legislatures, which will be under pressure to preserve deductions after the federal tax law did away with so many of them.

“States are already going to be under pressure to hold the line on state and municipal tax increases,” he said. “The political environment won’t be conducive.”