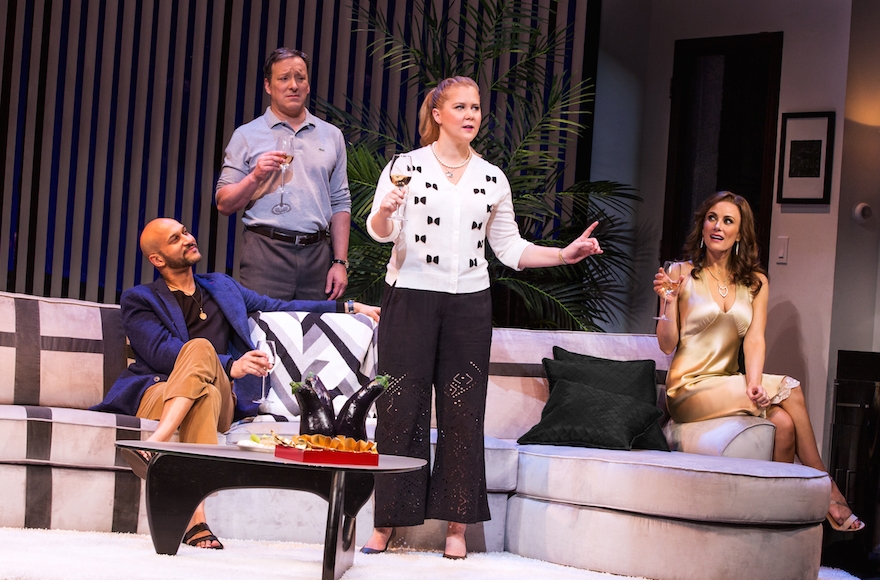 In reviews for “Meteor Shower,” the new Broadway comedy by Steve Martin, the entertainment website Deadline.com says Shamos “is priceless as the zhlubbish Norm,” who is the “mushy husband” to the character played by comedian Amy Schumer. And the Los Angeles Times calls Shamos “the strongest actor in the quartet,” which in addition to Schumer features comedy star Keegan-Michael Key and Broadway powerhouse Laura Benanti, both well-known for TV roles.

The celebrated Schumer, who recently explored her Eastern European Jewish heritage on the PBS series “Finding Your Roots,” and Shamos, the son of New York Jewish parents who were married in Manhattan’s Temple Emanuel, bring an indefinable but unmistakable sense of Jewishness to their on-stage marriage, despite the lack of any references  in the play to the couple’s ethnicity.

In a story about “Meteor Shower,” The New York Times notes, “Comedy of the type that sustained the commercial theater for decades – verbal and domestic, often involving Jews – has petered out as a genre.” Martin’s story of two very different kinds of couples revives that category of theater in a big, loud, and yes, Jewish way.

“Jewish humor is so successful and so much a part of the vocabulary of comedy,” says Shamos, “that we almost don’t recognize it as Borscht Belty kind of humor, or even older than the Borscht Belt. I think there’s been a shying away from jokes that set each other up and knock each other down in that Neil Simon kind of way.”

Shamos, 47, attributes that to what he called “an element of drama criticism that made it so [that] something that just goes for a laugh is sort of cheap.”

In “Meteor Shower,” however, he says “there’s a story and a meaning, but it’s OK if you take a couple of minutes to let something funny happen that’s purely for the joy of laughing.”

Shamos does deliver his share of outright jokes in the play, which takes place in Ojai, California, during a striking celestial event. When Norm is asked if stars are visible in that area, he replies, “Of course. They’re out shopping every weekend!”

But most of the laughs he gets can’t be followed by a rimshot. They’re born of the intricate, hilarious interplay between Shamos and Schumer, along with one sight gag in particular that might best be described (without spoiling it) as a watershed moment. 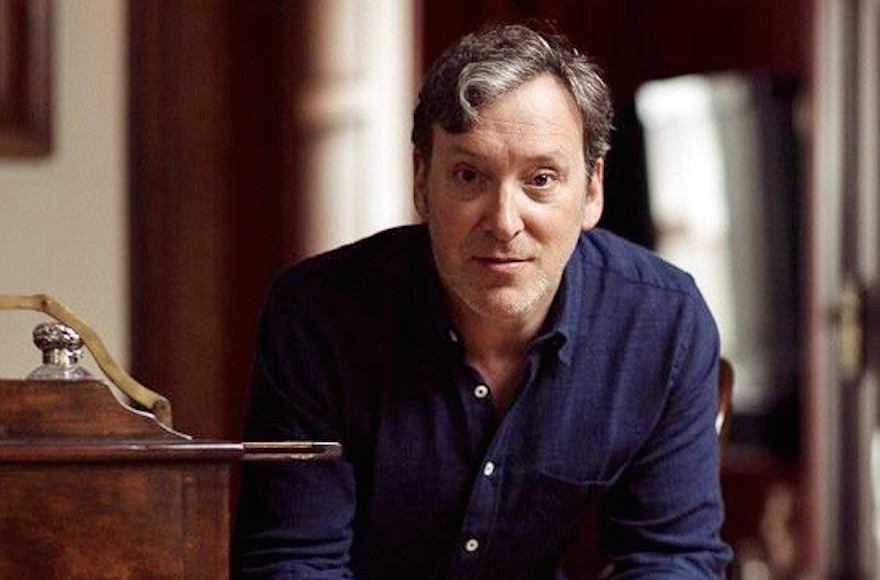 Jeremy Shamos “is priceless as the zhlubbish Norm” in “Meteor Shower,” one reviewer says. (Courtesy of Shamos)

Early in 2017, Shamos portrayed a very different kind of character, a Jewish studies professor, in the Roundabout Theatre Company’s production of Steven Levenson‘s “If I Forget.”

“It’s an incredible play about the complications of being Jewish at the end of the last century,” Shamos says. “If you look at the Jewish-American journey, it’s a complicated time to be very religious because that feels sometimes like you’re not living in the world of America. But if you live completely in the world of America and forget your Jewish traditions, then you’re forsaking your religion in a way.”

Shamos finds echoes of that in his own family’s saga.

“Both of my parents were Reform enough that neither had a bar or bat mitzvah. We moved from New York to Denver, and my sister and I went to the kindergarten, Sunday school and Hebrew school of the Reform synagogue there, also named Temple Emanuel, and we had a bar and bat mitzvah. So we were more religious than our parents had been.”

Shamos and his wife, actress Nina Hellman, have an 8-year-old son and a 10-year-old daughter. He says the family is “culturally Jewish, in terms of Passover and Hanukkah and things like that.” The kids don’t attend Hebrew school.

“Now that we have children, I don’t know where we’re going,” he says.

Shamos knows, however, where his career is going, and that’s in the right direction. He has had important TV roles in “Better Call Saul” and “Nurse Jackie“ and played an actor who is memorably offed in the 2014 Oscar winner “Birdman or (The Unexpected Virtue of Ignorance).” Two reviews of “Meteor Shower” call him “Mr. Reliable” and “a Broadway reliable.”

What does that mean to him?

“I’m like vanilla ice cream — good with any topping!” he says, laughing. “I consider it to be an honorable expression. Being reliable, especially in theater, means they can sit back and feel they’re in good hands. That’s a good thing.”

And with four major talents on stage at once, the audience is in for a treat, especially when the unexpected occurs.

“We have had moments of cracking each other up. And in this show in particular, it seems like a real opportunity for something to happen,” Shamos says. “One time the top of a martini shaker fell on the stage and rolled around, and Amy, who’s the quickest person I’ve ever known, picked it up and said, ‘Oh, it’s heads; it’s good luck!,’ which was completely random. That got a big laugh. The audience gets to see something they don’t see on TV, which is a live moment.”

The theatergoers also get a respite from real life during the play, Shamos says.

“Aside from the fact that they haven’t thought about current politics and where the country’s going, there’s just a catharsis that comes from laughter and from people having the same experience in one room,” he says. “I think when people come out of this show, they’re completely refreshed.”

Which is exactly, one might say, what’s expected from a good shower.