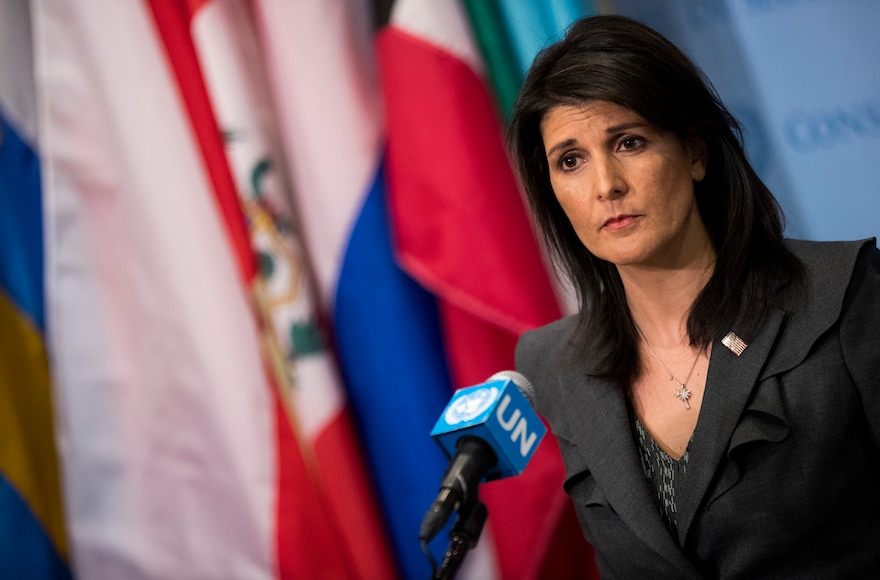 WASHINGTON (JTA) — Nikki Haley, the U.S. ambassador to the United Nations, said President Donald Trump’s threat to cut funding to the Palestinians could extend to the UNRWA, the relief agency for Palestinians.

“The president has basically said that he doesn’t want to give any additional funding or stop funding until the Palestinians are agreeing to come back to the negotiating table,” Haley said at a news conference Tuesday when asked if the threats to cut funding extended to UNRWA.

Haley said the threats to cut funding were a result of the U.N. General Assembly condemning, at the Palestinian delegation’s behest, Trump’s recognition last month of Jerusalem as Israel’s capital.

“What we saw with the resolution was not helpful to the situation,” she said. “We’re trying to move to a peace process, but if that doesn’t happen, the president’s not going to continue to fund that situation.”

The United States is the largest single donor to UNRWA, contributing $368 million of its $1.2 billion annual budget last year alone.

Unlike the money that Trump and some lawmakers in Congress have threatened to cut, which goes to the West Bank, most UNRWA assistance is distributed to Palestinians in the Gaza Strip, Jordan, Lebanon and Syria. Its schools and social services in Gaza are considered a mainstay of life in the strip. UNRWA has played a central role in administering assistance to Palestinian refugees of the civil war raging in Syria.

Israeli critics say that UNRWA in the Gaza Strip is not sufficiently vigilant about the uses of its facilities by Hamas and other terrorist groups. UNRWA has condemned Hamas for using its schools to stockpile rockets during the summer months, but Israel says that such discoveries often come after Palestinian civilians are placed in danger.

Trump, writing Tuesday on Twitter, questioned whether the United States should continue its assistance to the Palestinian areas. A year ago, a Congressional Research Service reported that would amount to $328 million for 2017, including $36 million for security assistance. It’s not clear if that was the final amount; the State Department has mechanisms in place that deduct funding commensurate to how much the Palestinian Authority pays the families of attackers against Israelis.

Israel opposes cuts to security funding for the Palestinians, as Palestinian forces play a role in keeping the West Bank quiet.