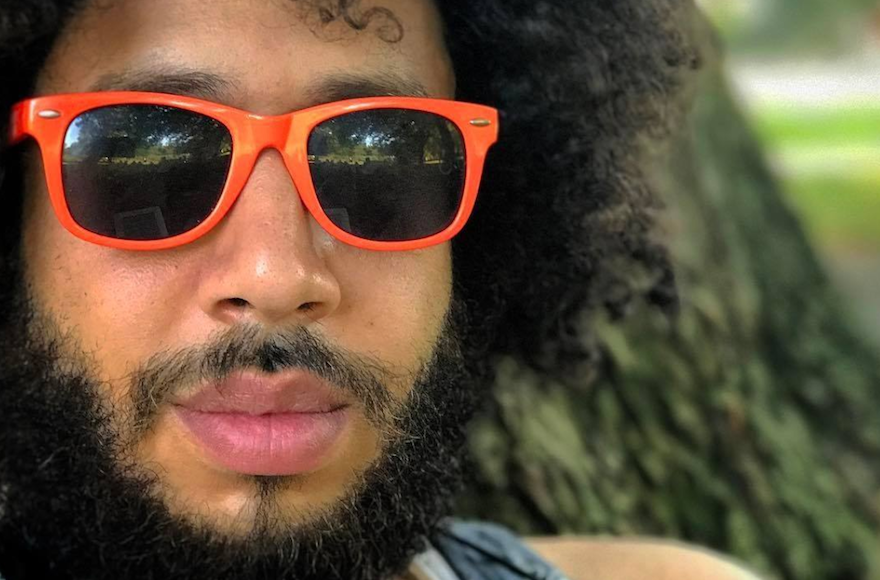 (JTA) — Imagine walking into a convenience store with your headphones on, picking out a conditioner bottle — then turning around to see two police officers pointing their guns at you.

That’s what happened to Ben Faulding, a black Jewish New Yorker who goes by @TheHipsterRebbe on Twitter and Instagram. In a tweet thread Wednesday, he narrated his shock when, on a walk back from his gym in Long Island, New York, he stopped to buy some toiletries.

When he turned to go to the cashier, “there’s a Nassau County Police officer standing there. With his weapon drawn.”

The rest of the story is harrowing. It begins with the line “Here’s a story about how I nearly just got killed by this cop.”

Here’s a story about how I nearly just got killed by this cop. pic.twitter.com/3IYZFM9Ggh

Faulding writes that he found himself facing two police officers with their guns pointed at him, screaming at him to get on the ground. Faulding feared for his life — and had trouble hearing the cop because he was wearing noise-canceling headphones.

First he goes down another aisle. Then comes back…with another officer also with his weapon drawn.
The second officer screams at me to get on the ground. Now. I can barely hear them cuz of my headphones.

The experience made Faulding think of Daniel Shaver, an Arizona man who was shot and killed recently by police while he was following their instructions — but had reached back to pull up his shorts. The officer who shot Shaver said he thought Shaver was reaching for a gun.

I’ve watched that video a dozen times wondering if I’d make the same mistake if I were in that situation.
All Shaver did was reach back to pull his shorts up when they fell a little. A subconscious, small hand motion. He probably didn’t even think about it. And it ended his life

Faulding followed the police officers’ orders, and they handcuffed him and removed his headphones. After searching his bag and finding nothing, they let him go.

They put the bracelets on and oddly enough I felt a little safer after that. I was still screaming for them to take of my headphones which they did.
They searched my pockets and gym bag. I hadn’t taken anything so I was fine. They let me go.

The incident happened, Faulding wrote, because the store clerk incorrectly suspected him of shoplifting, and the cops came expecting an armed robbery. In his tweets, Faulding sounds relieved but understandably indignant, as the episode could have easily ended in his death. In a post retelling the incident on Facebook, he wrote, “Had the officer been a little bit more jumpy or had I flinched the wrong way … well you’ve seen the videos.”

Listening to music on headphones so loud might not have been the smartest move, but it was almost deadly. And it shouldn’t have been.

The thread has gone viral, getting retweeted more than 100,000 times as of Friday afternoon.

Faulding has written that he regularly faces racism from Jews. In a blog post from 2014, he wrote that while living in Crown Heights, a Brooklyn neighborhood with a large Jewish population, people would call him “shvartze,” a Yiddish term used to disparage black people. To protest the term, he posed for a photo with the slur written on his forehead.

“Being a Jew with a black father, living in Crown Heights is a strange experience. There is always a strong undercurrent of racism,” he wrote. “You’ll be moving along just fine and then the ‘S-bomb’ will come along and just ruin your day, or at the very least your hour and minute. It’s never nice when it’s said. No one ever says ‘I had a man do my taxes. He’s shvartze.’ Nor do they say ‘my son is playing with the boys next door, they’re shvartze.’ It’s always ‘a shvartze stole my bike;’ or ‘if the shvartzes [take] welfare why shouldn’t we.’

But despite facing racism —  along with anti-Semitism — Faulding wrote in 2014 that he doesn’t want to be defined solely by his race or religion.

“I have no interest in being an ambassador or a bridge between the two peoples,” he wrote. “I am not my race. I am who I want to be. I am a chossid. I ride my bike. I take pictures. I am also black and Jewish; and I’m proud of both of those things, but I am not defined by these external qualities.”