The underwhelming fact that Jared Kushner has ties with Israeli businesses 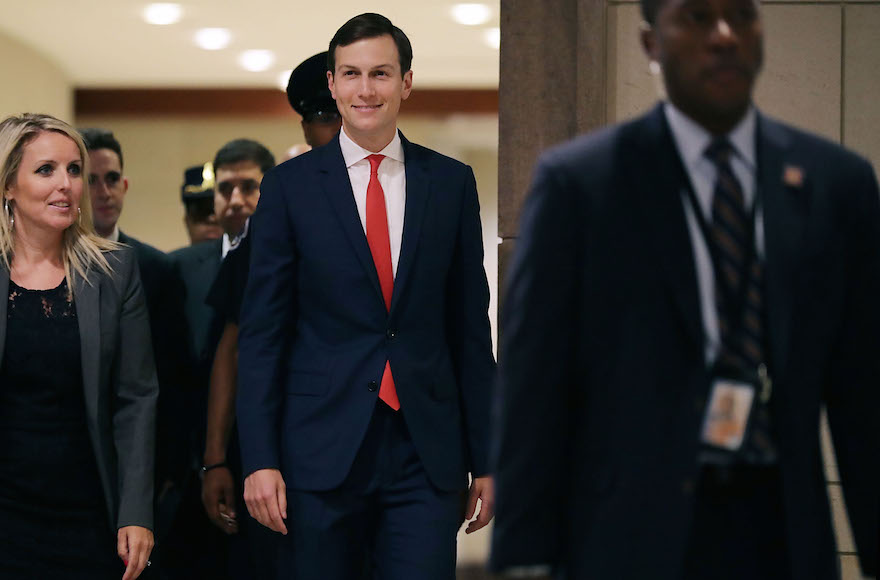 NEW YORK (JTA) — On Season 3 of “The West Wing,” a bomb goes off outside a cafe on Ben Yehuda Street in Jerusalem, killing two American students.

“What were they doing there?” asks C.J., the White House press secretary.

C.J.’s question always struck me as the prime example of Hollywood cluelessness when it comes to Israel. If you have zero relationship with Israel outside of the news media, you may well not understand why two American teens would be partying in a war zone. If your relationship to Israel is close, you know that Ben Yehuda is Jerusalem’s Times Square, and that hanging out there is a rite of passage for yeshiva kids, semester-abroad students, backpackers and Birthrighters.

A similar cluelessness — or coyness — shapes The New York Times report this weekend on how Jared Kushner’s family real estate company continues to do business with Israelis even as he plays point on the Mideast peace process. It reports on a $30 million investment in Kushner properties from the Israeli insurer Menora Mivtachim, in addition to a $200 million Manhattan and New Jersey real estate deal with Israel’s Steinmetz family and loans from Israel’s Bank Hapoalim. The article notes that the firm bought Manhattan office space from the Israeli billionaire Lev Leviev.

That’s the meat of the story. The reporting fulfills an important function of the media in keeping tabs on all the business ties of President Donald Trump and his family, who tend to mix business with governance in ways that confound ethicists.

But it’s the analysis that strikes me as odd, and off. Even while acknowledging that the Kushner Companies’ business dealings “don’t appear to violate federal ethics laws,” the article suggests that the Kushner family’s Israel ties may nonetheless be troubling.

Kushner stepped down as head of Kushner Companies when he joined the White House last January, although he stands to gain from trusts that own stakes in Kushner  investments. Adds the Times: “And no evidence has emerged that Mr. Kushner was personally involved in brokering the deal” with Menora.

OK so far. Ethics watchdogs warn that Trump family businesses are benefiting from Trump‘s presidency, but the Menora deal appears to pass the legal test.

The Times goes on, however: “But the deal last spring illustrates how the Kushner Companies’ extensive financial ties to Israel continue to deepen, even with his prominent diplomatic role in the Middle East. The arrangement could undermine the ability of the United States to be seen as an independent broker in the region.”

Says who? The Times quotes ethics experts, but what about the other players in the region itself? Had they spoken to Arab diplomats, they probably would have found deep distrust of the Trump team that has nothing to do with Kushner’s business ties. Candidate Trump told AIPAC that “the bond between the United States and Israel is absolutely unbreakable.” Trump’s ambassador to Israel is a pro-Israel hawk. His vice president is a pro-Israel evangelical. Trump became the first president to recognize Jerusalem as Israel’s capital.

Does the fact that Kushner’s family does business with some Israeli oligarchs and banks really undermine whatever faith the Arabs do or don’t have in the U.S. as honest broker? What does news of these business deals tell them that they don’t already know?

Weirdest of all is what the article leaves out: It never says that Kushner is Jewish, or comes from a real estate family that has long combined their observant Judaism with their business and philanthropic interests.

It isn’t shocking that a connected Jewish family would do business in Israel and with Israelis, any more than an American Jewish teen would hang out on Ben Yehuda Street. Wealthy Jewish families like the Kushners have organic ties — familial and ethnic — in Israel, and usually a deep interest in boosting Israel’s economy. There is, for sure, an underbelly in which entitled people in the U.S. and Israel scratch each other’s backs, but let’s suppose that the Kushners do business with Israelis for all the right reasons — some combination of self-interest and ethnic conviction.

Readers who aren’t aware of this Diaspora-Israeli connection could assume that Jared Kushner is trying to broker a peace that would benefit his business interests. First, that would be like trying to cure cancer to sell more long-term life insurance policies — I mean, if that’s what it takes, go for it. Second, it presupposes that the peace — or even just the negotiations — could be shaped to make money for Kushner while disadvantaging the Palestinians. That seems like a stretch.

The article should have just come out and said it: Jared Kushner is a Jew. And not only a Jew, but one who comes from a family with deep ties to the State of Israel that are personal, philanthropic and business-related. And OK, right wing — like a lot of Orthodox Jews.

Over the years, a number of Mideast negotiators have been Jewish. Martin Indyk. Dennis Ross. Daniel Kurtzer. Steven P. Cohen. The Arab world understood this. And it didn’t undermine anything because they spoke for administrations whose pro-Israel prejudices, such as they were, were understood from the get-go. It didn’t matter that the interlocutors were Jews or had connections in Israel. What mattered was what they and the United States were prepared to deliver, through their pressure and influence on Israel. If the Arab world thinks the Trump administration isn’t going to be an honest broker, the fact that the Kushners bought real estate from Lev Leviev is hardly the dispositive issue The Times suggests it may be.

The Trumps and Kushner should have done a lot more to distance themselves from their businesses. No doubt. But the suggestion that Kushner and the Kushner Companies are working to shape the “ultimate deal” to line their pockets, or benefit some Israeli investors, seems nuts. There are so many easier ways to make money than betting on Middle East peace.