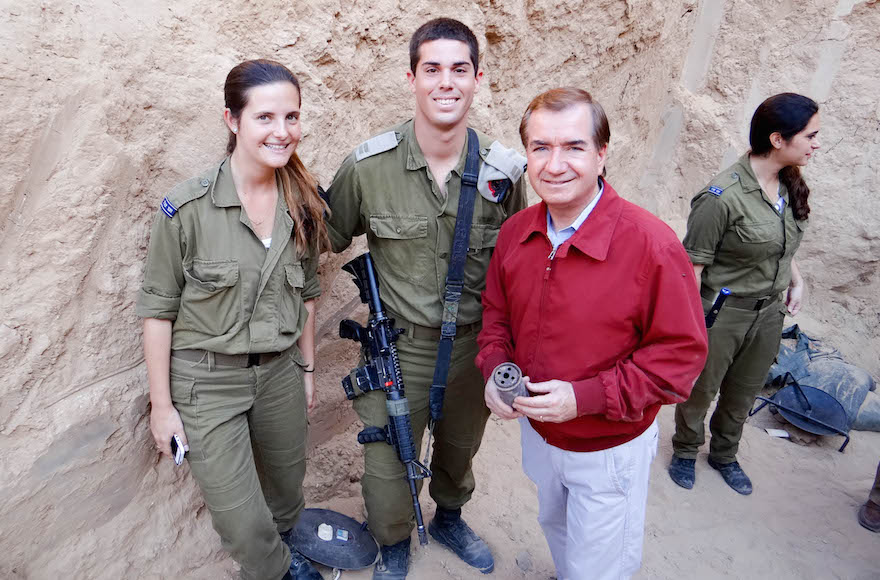 WASHINGTON (JTA) — Rep. Ed Royce, a California Republican known for his support of Israel and being the rare lawmaker who championed bipartisanship, is leaving Congress.

“This final year of my Foreign Affairs Committee chairmanship, I want to focus fully on the urgent threats facing our nation, including the brutal, corrupt and dangerous regimes in Pyongyang and Tehran, Vladimir Putin’s continued efforts to weaponize information to fracture western democracies, and growing terrorist threats in Africa and Central Asia,” Royce, who as committee chairman is the top foreign affairs lawmaker in the House of Representatives, said in a statement released late Monday. “With this in mind, and with the support of my wife Marie, I have decided not to seek re-election in November.”

Royce stood out for his pro-Israel steadfastness, which he said was rooted in hearing his father recount the horrors he witnessed as an American soldier who helped liberate Dachau.

“He took photos to document the tragedy, to document the horror of what he witnessed because he knew the world would have a hard time understanding the magnitude of this crime,” Royce said in 2011 at a Holocaust memorial event. “My father, as a very young man, stared evil in the face and had the presence of mind to record the terrible scenes. Thank goodness he did. He has used his pictures ever since, even to this day, in lecturing high school classes.”

Royce and his Democratic counterpart, Rep. Eliot Engel, D-N.Y., also were what has become a rarity: a bipartisan pair who consulted closely before advancing legislation, with the aim of garnering as much support as possible in Congress.

In 2017 alone, Royce and Engel advanced legislation that added sanctions targeting Iran’s missile development, that made aid to the Palestinians conditional on not rewarding families of Palestinians who killed Israelis, that enhanced reporting on European anti-Semitism, and that slammed the Obama administration for allowing through a U.N. Security Council resolution attacking Israel’s settlement policies.

“Under his leadership, our members on both sides of the aisle know their ideas will be heard and considered,” Engel said in a statement. “And when we’re at odds, he works to find the middle ground and forge a path forward rather than allowing partisanship and politics to grind our efforts to a halt.”

Typical of how Royce considered Democratic concerns were modifications he accepted to the bill conditioning aid to the Palestinians. The final version preserved some humanitarian assistance. The bill, dubbed the Taylor Force Act for an American murdered by a Palestinian in 2016, overwhelmingly passed the House last month. It is still under consideration in the Senate.

Royce is the latest moderate Republican to announce he won’t run again. His Southern California district went for Hillary Clinton in the 2016 presidential election, and with Democrats galvanized by their opposition to President Donald Trump, Republicans in swing districts are seen as facing an uphill battle in congressional elections this year.

“We are grateful and so appreciative for all you have done to promote freedom and democracy around the world and to strengthen the important bonds between the U.S. and Israel,” RJC director Matt Brooks said on Twitter.

.@RepEdRoyce we are grateful and so appreciative for all you have done to promote freedom and democracy around the world and to strengthen the important bonds between the US and Israel. I'm proud to call you Friend. https://t.co/VWK3NiIjZb