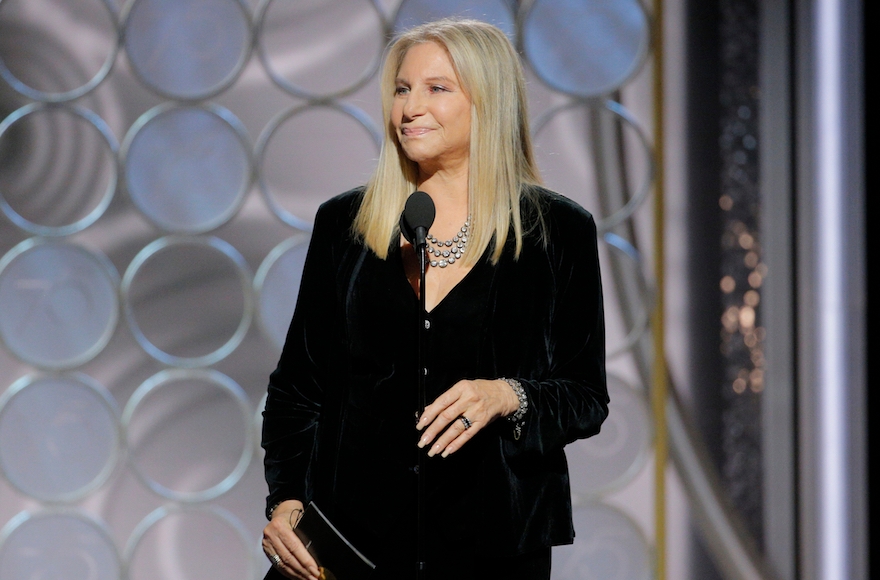 (JTA) — Barbra Streisand criticized the sexism of Hollywood while presenting an award at the Golden Globes, pointing out that she is the only woman to have received its best director award.

“Backstage I heard they said I was the only woman … to get the best director award, and you know, that was 1984: That was 34 years ago. Folks, time’s up!”  Streisand said before presenting the final award of the night for best motion picture.

Streisand’s best director award at the Golden Globes was for the movie “Yentl,” in which she also played the title character.

“We need more women directors and more women to be nominated for best director,” the famed Jewish singer-actress also said. “These are so many films out there that are so good directed by women.”

Later tweeting some of her remarks, Streisand added: “I also would have liked to see director @PattyJenks and her film @WonderWomanFilm recognized because it shows how strong women can be, not only as characters but also at the box office. The three highest-grossing films last year were all carried by women.”

The Israeli actress Gal Gadot starred as the title character in “Wonder Woman.”

Here’s a terrible fact—
There has not been a single woman who has won the Golden Globe for Best Director since I was fortunate enough to win it for Yentl in 1984…that’s 34 years ago! Not right!

I also would have liked to see director @PattyJenks and her film @WonderWomanFilm recognized because it shows how strong women can be, not only as characters but also at the box office. The three highest-grossing films last year were all carried by women.

Streisand also praised Hollywood movers and shakers for changing the way they do business in the wake of the sexual harassment scandals that have rocked the industry.

“I’m very proud to stand in a room with people who speak out against gender inequality, sexual harassment and the pettiness that has poisoned our politics,” she said. “And I’m proud that our industry, when faced with uncomfortable truths, has vowed to change the ways we do business.”

Actress and director Natalie Portman, who is Jewish, also addressed the inequality in Hollywood while presenting the award for best director, saying “Here are the all-male nominees.”

Women have been nominated in the Golden Globe’s best director category only seven times since 1943, according to the Los Angeles Times. Streisand also was nominated in 1991 for “The Prince of Tides.”