‘The Marvelous Mrs. Maisel’ wins big at the Golden Globes 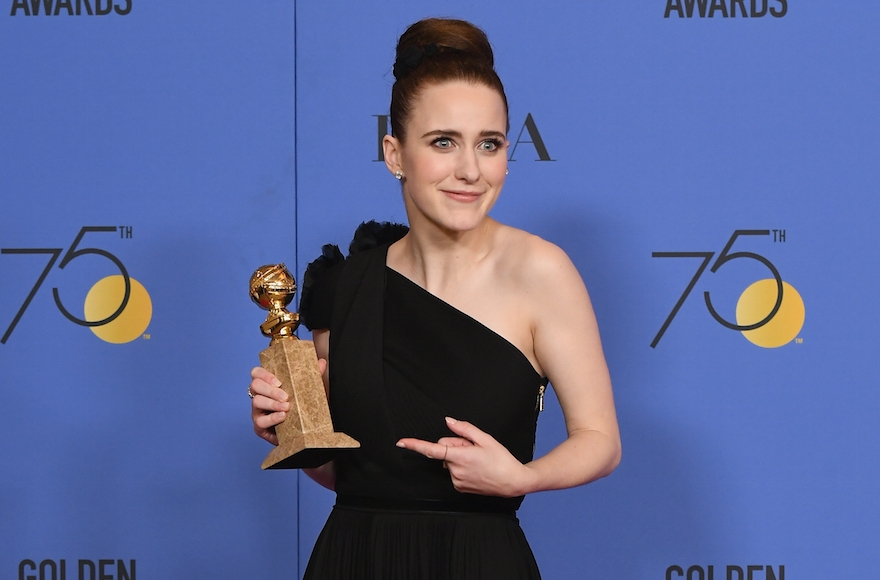 Rachel Brosnahan posing with her Golden Globe award for Best Performance by an Actress in a Television Series Musical or Comedy for "The Marvelous Mrs. Maisel" at the 75th Annual Golden Globe Awards at The Beverly Hilton Hotel in Beverly Hills, Calif., Jan. 7, 2018. (Kevin Winter/Getty Images)
Advertisement

Creator Amy Sherman-Palladino, who is Jewish, accepted the award for best comedy series.

James Franco won for best actor in a feature comedy for his portrayal of the eccentric director Tommy Wiseau in “The Disaster Artist,” a semi-fictional retelling of the production of Wiseau’s 2003 film “The Room” — popularly known as one of the worst movies ever made. The Jewish actor praised his longtime collaborator Seth Rogen, who had a part in “The Disaster Artist,” and his brother Dave Franco, who co-stars in the film and whom he called “my own Coen brother.”

Jewish actresses such as Gal Gadot, Natalie Portman, Debra Messing and Tracee Ellis Ross joined dozens of other actresses in wearing black to the awards ceremony to take a stand against sexual harassment and gender inequality in Hollywood. The move also promoted the “Time’s Up” initiative spearheaded by several prominent actresses, and supported by hundreds more, to fight sexual harassment, assault and inequality for women in the workplace. The initiative has raised more than $15 million toward a fund for victims in the week since its founding.

“For the male nominees in the room tonight, this is the first time in three months it won’t be terrifying to hear your name read out loud,” Meyers quipped. He noted that Weinstein was not present at the ceremony, adding: “But don’t worry, he’ll be back in 20 years when he becomes the first person ever booed during the In Memoriam.”

Portman, who is also a director, addressed inequality in Hollywood in presenting the award for best director, announcing “Here are the all-male nominees.”

Golden Globe winners are decided by the Hollywood Foreign Press Association, a nonprofit organization. At the ceremony, the association announced $2 million in grants to the International Consortium of Investigative Journalists and the Committee To Protect Journalists.