What Martin Luther King Jr. learned on a visit to Jerusalem 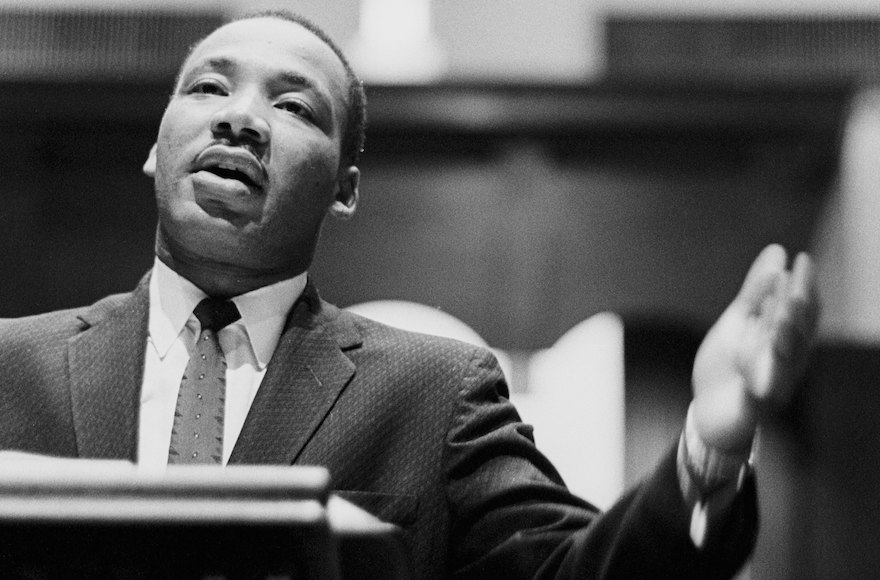 (JTA) — On Easter Sunday in 1959, the Rev. Martin Luther King Jr. rose in the pulpit of his Dexter Avenue Baptist Church in Montgomery, Alabama, to deliver a sermon that focused on his just-completed visit, with his wife, Coretta, to Jerusalem and its holy sites.

King’s trip that month to eastern Jerusalem and the nearby cities of Bethlehem, Hebron, Nablus and Jericho, all of which were then part of Jordan, came at the end of a monthlong visit to India that he wrote about extensively later in his autobiography.

However, little remains to us from his visit to Jerusalem, except for an audio recording and transcript of that late March sermon nearly six decades ago, which he titled “Pilgrimage to Non-Violence” and spoke movingly of walking in the footsteps of his two greatest inspirations, Mahatma Gandhi and Jesus. The sermon speaks of the deep impact of walking on the Via Dolorosa in the Old City, where Jesus was mocked and tormented, and how profoundly he connected Jesus’ vision of peace, love and justice with his own struggle for justice for African-Americans.

King opened his sermon by lamenting that the two sides of Jerusalem – the Jordanian eastern part and the Israeli western part – were sealed off from each other and therefore he was unable to cross to the Israeli side.

“This city has been divided,” King said. “And if on your visa it is revealed that you are going into any Arab nation, you can only go to Israel without being able to … go back to an Arab country. … So this was a strange feeling to go to the ancient city of God and see the tragedies of man’s hate and his evil, which causes him to fight and live in conflict.”

King told his congregants that when he came to the spot on the Via Dolorosa where Jesus stumbled under the weight of the cross, “The thing that I thought about at that moment was that … it was a black man that picked it up for him and said, ‘I will help you,’ and took it on up to Calvary.” Simon of Cyrene, who carried the cross, is often depicted as a black man.

“And I think we know today there is a struggle, a desperate struggle, going on in this world. Two-thirds of the people of the world are colored people … There is a struggle on the part of these people today to gain freedom and human dignity. And I think (that) one day, God will remember that it was a black man that helped His son in the darkest and most desolate moment of his life.”

Invoking the parlous condition of African-Americans, most of whom were then still suffering under a regime of strict segregation and dire poverty, King said, “And so, this morning, let us not be disillusioned. Let us not lose faith. So often we’ve been crucified. We’ve been buried in numerous graves — the grave of economic insecurity, the grave of exploitation, the grave of oppression. We’ve watched justice trampled over and truth crucified. But I’m here to tell you this morning, Easter reminds us that it won’t be like that all the way. It reminds us that God has a light that can shine amid all of the darkness.”

King concluded, “Know that God has the universe in His hands. And because of that, segregation will die one day. Because of that, all of the lands of Africa will be free one day.”

The civil rights leader never got the chance to visit Israel, including West Jerusalem and the Christian holy sites of Galilee. He was in the process of planning such a trip, with the strong support of the government of Israel, in 1967, but canceled in the wake of the Six-Day War. King was assassinated the following year.

Nevertheless, we can take solace that King’s powerful experience in 1959 gave him spiritual fortitude that helped sustain his leadership of the civil rights movement during the climactic struggles of the 1960s. Those struggles liberated African-Americans from more than 300 years of slavery and segregation, and finally changed America into a country that began to live up to the promise of its founding documents.

On this Martin Luther King Day 2018, let us — Jews, Christians, Muslims and all people of conscience — reflect upon King’s only visit to Jerusalem in 1959.

(Rabbi Marc Schneier is president of the Foundation for Ethnic Understanding and is the author of “Shared Dreams: Martin Luther King Jr. and the Jewish Community.”)