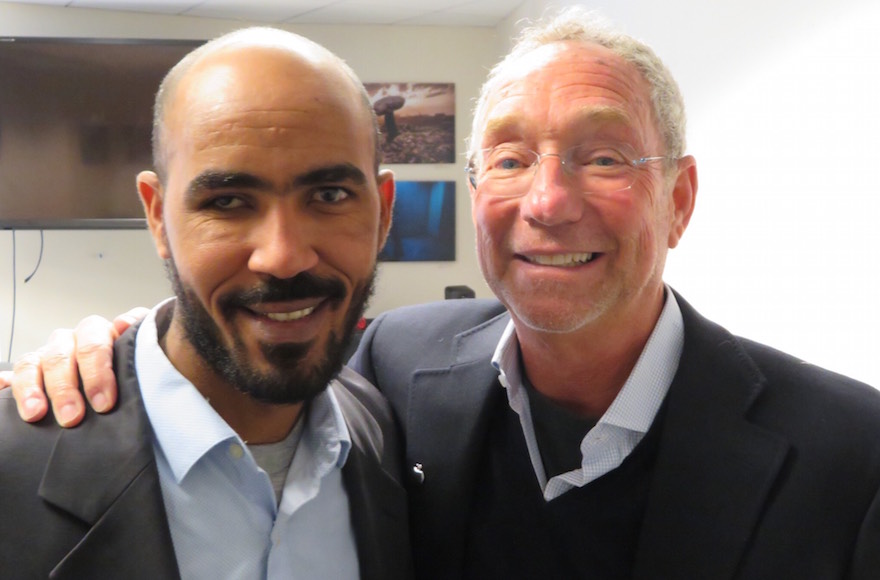 WASHINGTON (JTA) — Yikealo Beyene’s story is — up to a point — perfect feel-good fodder for a Saturday morning talk at synagogue.

As a refugee from Eritrea, he read Anne Frank’s diary in his native tongue and translated it, teaching the tale to kids in an Ethiopian refugee camp. He sought out Israel for the refuge it promised and can’t stop talking about the kindnesses that Israelis afforded him once he arrived. He lived in Israel for eight years, earning bachelor’s and master’s degrees, and is now living in Seattle, a leader of his community.

But Beyene’s story, which he related in a speech on Shabbat morning at Ohev Shalom, an Orthodox synagogue here known for its politically involved congregation, hit a bump toward the end. That’s when he brought up his mission, backed by the New York-based philanthropist Joey Low, to stop Prime Minister Benjamin Netanyahu’s government from deporting or jailing tens of thousands of refugees from Africa.

“I now consider Israel as my second home and I feel dutiful to defend it,” he said. “Now if I stop my speech here, I would be a bit dishonest.”

Some 60,000 African migrants entered Israel prior to the construction of a barrier on its southern border with the Sinai in 2012. Israel, which considers them economic migrants, not refugees from persecution, until now has encouraged the Africans to leave by handing them cash — generally about $3,500 — and a plane ticket. About 20,000 have taken the offer, leaving nearly 40,000 in Israel, most living freely.

This month, Netanyahu said those who do not take the deportation offer face jail. Rwanda and Uganda reportedly are the likeliest destinations for deportees, though both governments deny it.

In recent years the refugees have made their way to Israel from various countries, including Sudan, Eritrea and Somalia.

“As much as I love Israel, I do not want to conceal how deeply concerned I am about the recent move by the government to expel African refugees and asylum seekers in Israel to Rwanda,” said Beyene, 33. (The event was on the record but on Shabbat, so no recording or note-taking was permitted. A JTA reporter was present and given a copy of Beyene’s prepared remarks.)

Low, an investor who has donated millions of dollars to Israeli causes over the years, says convincing American Jews to pressure Israel on the issue is a long shot — but he is determined to try.

“My heart is in Israel,” said Low, who spends several months a year in the country and has invested in startups there.

It’s especially painful, he says, considering that the philanthropy he founded has given millions of dollars to Israel at Heart, an NGO that sends young Israelis around the world to improve the country’s image.

“You can’t do something like this in the name of Jews and Israel,” Low said of the deportations.

His parents were Holocaust-era refugees, from Germany and Austria, and they loom large in his advocacy. Low, 66, is also a funder of the Interdisciplinary Center, a research college in Herzliya.

American Jewish protests against the planned deportation have been relatively muted and confined to Jewish groups that are less reluctant to criticize the Israeli government on policy issues. A recent exchange with Israel’s Foreign Ministry on the matter was signed by HIAS, the lead Jewish immigration advocacy group, leaders of the Reform movement, the National Council of Jewish Women and J Street, the liberal Middle East policy group, among other groups.

Even these groups, fighting what they see as threats to immigrants and minorities in the era of President Donald Trump, lack the bandwidth to make this a priority issue.

“The American Jewish community can be moved on these issues,” said Libby Lenkinski, the vice president for public engagement for the New Israel Fund, which funds groups that assist the African refugees in Israel. “But between that and making it a cause celebre? There’s some distance.”

“We’re obviously fighting on a lot of fronts right now for fairness and justice for refugees,” said Melanie Nezer, the vice president for public affairs at HIAS. “It would be nice to have one problem – we don’t.” From left to right, on right side of the window: Joey Low, Rabbi Shmuel Herzfeld and Yikealo Beyene delivering a letter to the Rwandan Embassy in Washington, D.C., urging the country not to accept African deportees from Israel, Jan. 8, 2018. (Courtesy of Low)

Russel Neiss, a St. Louis-based activist, is keeping a running list online of organizations that advocated for Sudanese refugees from Darfur in the mid-2000s — when it was a signature Jewish advocacy issue in America — but which are silent now that Israel may expel Africans faced with similar dangers. It’s called “Never Again is a Lie.”

“This is not something that should be particularly difficult in terms of standing up for what’s right; it’s never historically been a right or left issue,” he said. “A dozen years ago you had the Jewish community engaging in activities for many of the refugees who are in Israel right now. We haven’t lived up to our own promises.”

JTA contacted three of the establishment groups Neiss has in his “no comment” column. One, the Anti-Defamation League, replied. CEO Jonathan Greenblatt said the group was “greatly troubled” by Netanyahu’s plan.

“We urge the Israeli government to refrain from implementing this plan, and instead focus on finding a more appropriate and humane solution to this issue,” he said.

Low wants the Jewish establishment involved and has been on a one-man crusade to make it listen, bringing in activists from Israel and former refugees like Beyene to meet with major players. He went so far as to threaten to suspend his annual $100,000 donation to UJA-Federation of New York unless it took a meeting.

(UJA-Federation took the meeting, and Low said he will likely make his donation. “Joey introduced us to the day care center,” said UJA-Federation spokeswoman Emily Kutner, referring to Unitaf Israel, a network of day care centers for refugees. “They are doing important work for sure. UJA funds several organizations that work with refugees in Israel.”)

Low said he knows he needs a breakthrough.

“If Sheldon Adelson called Netanyahu up and said this is damaging to Israel, [Netanyahu] would stop it,” Low said, referring to the Las Vegas casino magnate who is hugely influential in Israeli politics. Low has made the calls seeking the conversation with Adelson — with no luck.

The reaction at Ohev Shalom, a congregation packed with denizens of Washington’s policy and academic communities, reflected the skepticism that the refugee advocates would face among conventional pro-Israel Jews. Some congregants peppered Beyene with questions (Why Israel? What’s wrong with Rwanda?), while others expressed real sympathy.

Rabbi Shmuel Herzfeld, who invited Beyene to speak, acknowledged the reluctance but said Israel had to answer for its actions.

“It’s not like the Israeli-Palestinian issue, however complicated that is” and where “there are two sides” responsible, he said. “This is how to make sure asylum seekers are safe.”

Netanyahu has cast the problem as a security threat, and centrist and right-wing pro-Israel Americans often hesitate to tread into issues of Israeli security.

“Today we are doing what we promised – restoring quiet, the sense of personal security and law and order to the residents of South Tel Aviv and also those of many other neighborhoods,” Netanyahu said at a Jan. 3 Cabinet meeting to discuss the deportation of 40,000 “illegal infiltrators,” as he described the refugees.

Refugee advocates have decried the use of the word infiltrator, once reserved for terrorists, as racist. An Israeli official who corresponded with the liberal U.S. critics of the plan was more restrained, saying in a letter that “the overwhelming majority of the illegal migrants who have arrived in Israel over the past decade are neither refugees nor asylum seekers, but rather economic migrants who have come to Israel in search of work.” 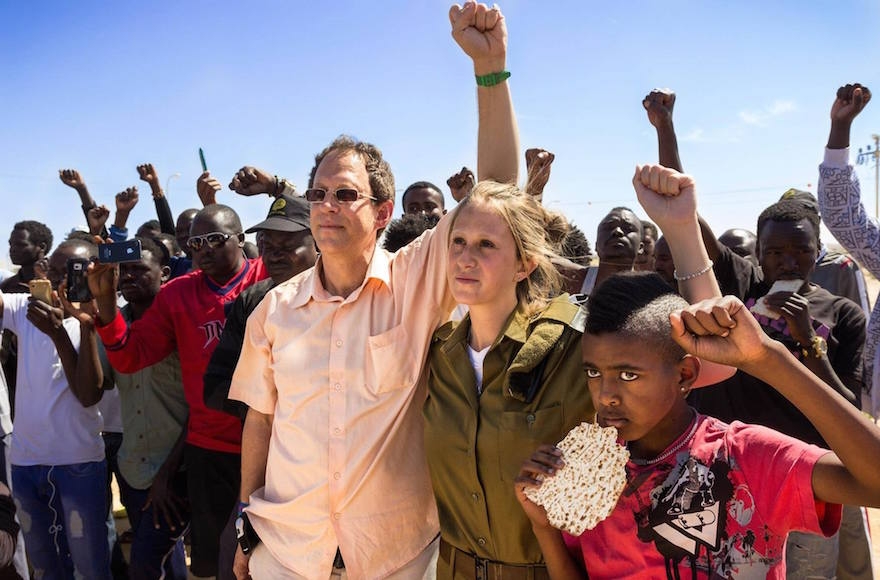 Advocates for the Africans say that the government vastly underestimates the number of migrants who would qualify under international law as refugees, noting that in other countries where Africans have found temporary refugee, 56 percent of Sudanese and 84 percent of Eritrean applicants have been given asylum. In Israel, it’s less than 1 percent.

They also note that the countries from which the Africans arrive are genuinely beset not just by economic woes, but by severe persecution on the basis of ethnicity and religious and political beliefs.

The advocates also question the rush to deport, asking why now. A fence that a previous government headed by Netanyahu erected in 2012 cut the rate of Africans seeking asylum to zero, as Netanyahu often notes. The perception that crime festers where the refugees settle appears to be supported more by anecdotal evidence than by statistics. Advocates say their crowding in South Tel Aviv, which is already beset by poverty, demonstrates a failure to distribute the refugees throughout the country.

Africans who have taken the government’s offer of cash and a ticket to destinations in Africa report that they are often left paperless and vulnerable to robberies or worse. In 2015, Islamic militants beheaded, on video, three Eritreans in Libya who were seeking passage to Europe; the three had spent time in Israel and had taken the cash offer.

Others note that Netanyahu has recently boasted of the inroads he has gained on the African continent. Mass deportations or incarceration of Africans would cloud the business deals and visits to Africa Netanyahu has made in the past two years, said Yosef Abramowitz, an Israeli activist on behalf of the refugees who has also done business in Africa in the solar energy area.

“We live in a digital, wired world and there’s no way they’re going to drag people out of homes in Israel and keep those relationships,” he said.

The refugees do not seek permanent status in Israel, Beyene said, but the chance he was afforded: to apply for refugee status in a third country. That process is long and leaves Africans in Israel for years, advocates acknowledge.

Abramowitz and Low said independently that should Netanyahu go ahead with the jailings and deportations, there were a cadre of Israelis ready to take to the streets. Low foresaw protesters blocking the deportees from getting on the planes. Abramowitz said activists in Israel were organizing sanctuary homes for the refugees.

Low said he might not be there to join in.

“If they start deporting these people,” he said, “I could not see myself going back to Israel.”