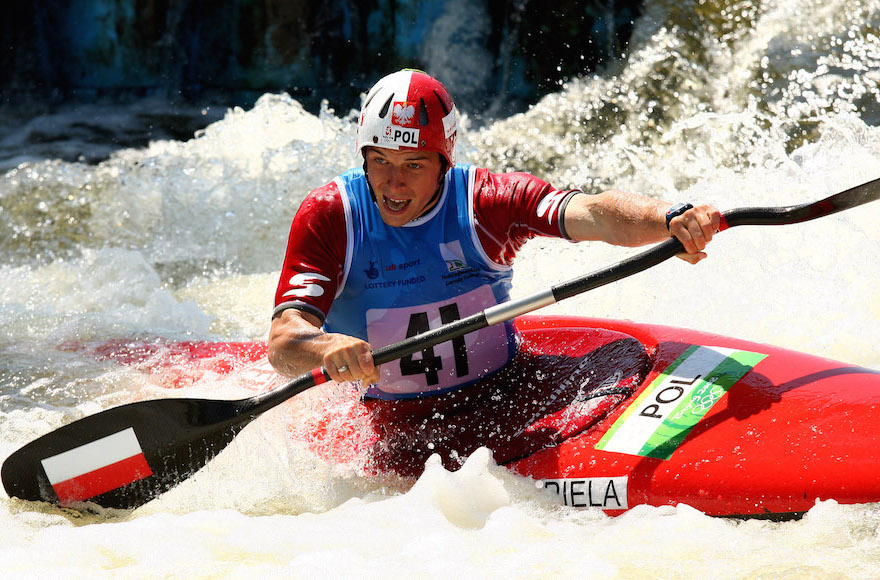 at the 2009 European Canoe Slalom Championships in Nottingham, England, May 30, 2009
Advertisement

WARSAW, Poland (JTA) —  A Polish Olympian is raising money for the construction of a monument dedicated to Jews from a village in southern Poland.

Dariusz Popiela, the Polish champion in the canoe/kayak slalom and the silver medalist at the European Championships, both last year, is working to commemorate the Jews of Krościenko.

Popiela, who participated in the 2008 Olympics in Beijing, and a group of friends have spearheaded a project to restore the memory of “the forgotten neighbors” as part of the Shtetl of Tzanz project of the Nomina Rosae Foundation.

Last year, he said, he accidentally found himself near the Jewish cemetery in Krościenko, which was devastated during World War II and remains in poor condition.

“Why?” Popiela asked on the crowdfunding site Pomagam, where he is raising money for a monument to the Jews of the town. “Probably multiple reasons are responsible, but the fact is that there are many people in Krościenko who are trying to change this state of things and have already taken some effort to save this only sign of the late citizens’ existence.”

Research has made it possible to collect a list of the Jews murdered in the village between the second half of 1939 and August 1942, when the last Jews left there. Part of Popiela’s project includes a monument erected at the Jewish cemetery in the shape of cracked  gravestone featuring the names of those victims. He and his friends also plan to build a new fence around the cemetery; the current one is rusted and falling apart.

Popiela wrote that the shape of the memorial is essential since almost no original gravestones have survived. He said there are only two that have been replaced on their foundations, and the rest were used by the Nazis to make floors and foundations.

The group has collected nearly 25 percent of the $3,000 needed to complete the project, according to his crowdfunding page. Popiela wrote that the project is a “private and spontaneous action.”

“Every penny, every cent will be spent to renovate this place,” he wrote. “Each, even the smallest donation will be a valuable contribution to our project. Let’s show the world together that it can and must be done!”