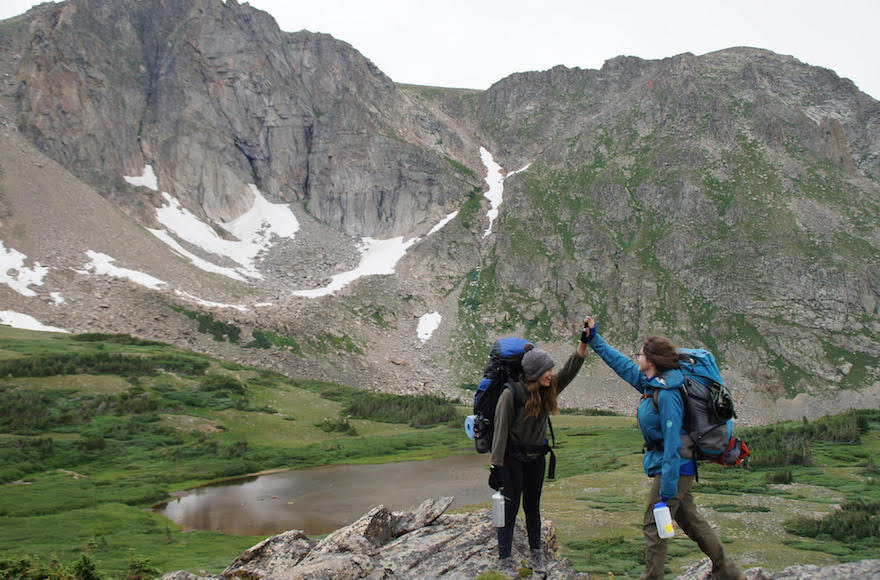 Program participants will spend half their time in the outdoors, hiking, praying, meditating and learning coping skills. (Courtesy of BaMidbar Wilderness Therapy)
Advertisement

When Jory Hanselman was a high school student, she found herself struggling on multiple fronts. A family member was wrestling with addiction and mental illness. And two friends died suddenly, one from suicide and another from an overdose.

“I was in a place where I was really struggling to deal with that loss along with taking into consideration the secondary trauma of living in a home where mental illness and addiction were playing out in a very real way,” Hanselman said.

To help her cope, her parents sent her to Utah to a program in wilderness therapy. The program employed an outdoors adventure-based approach to aid those facing a range of personal challenges, including substance abuse, addiction and mental illness.

“My identity as a Jew was really central to how I experienced that program,” Hanselman recalled. “I was there over Passover. And while I was there I really was impacted by this idea of leaving oppression, leaving these things that were holding me back and finding a path forward to my own self-liberation and being in a healthier, stronger place.” 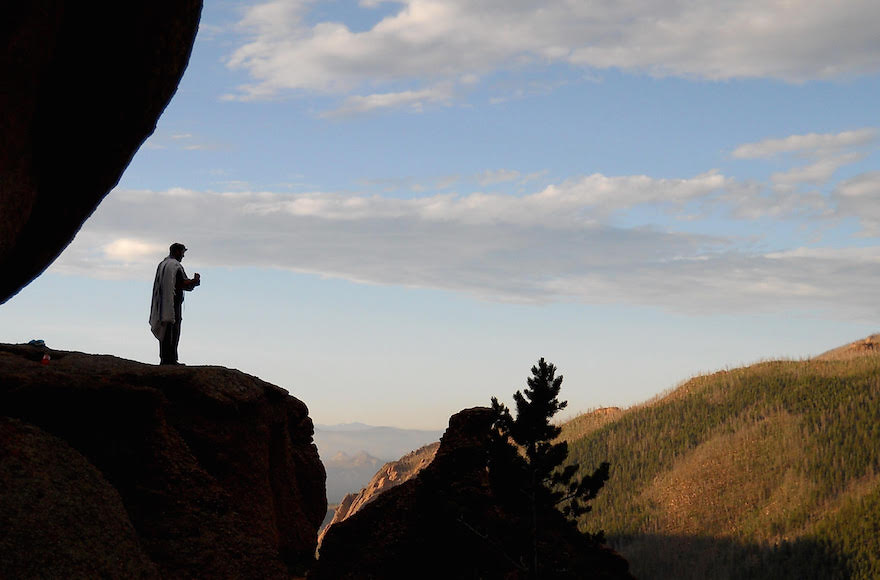 The wilderness therapy program will draw upon the support, strength and guidance that the Jewish tradition offers to those seeking to overcome adversity. (Courtesy of BaMidbar Wilderness Therapy)

Beginning in late January, Hanselman will begin to offer other young Jewish adults the opportunity to address significant life challenges using the same strategies, albeit in a Jewish framework.

Hanselman is the director of BaMidbar Wilderness Therapy, a new program that its backers say will be the first Jewish one in the country and is one of only a handful of such programs that are not for profit. The program will be housed at Camp Ramah in the Rockies, an outdoor adventure Jewish summer camp located on a 360-acre ranch in a national forest 90 minutes from Denver.

“When you go out into the wilderness, you just become open to all sorts of change,” said Rabbi Eliav Bock, director of Ramah of the Rockies. “When you go into the wildness, you strip away a lot of the noise we have around us — family, drugs, bad influences. You take somebody out of normal circumstances and force them to confront who they are as a person, what their core values are.”

Participants in BaMidbar Wilderness Therapy will spend about half their time at the camp’s base facility, where they will sleep in canvas tents and have access to trained therapists who will work with them on treatment plans. Base camp is also where the group will spend Shabbat.

The other half of their time at BaMidbar will be spent on excursions in the surrounding forests. The outings will include several hours of hiking per day, morning prayer focused on mindfulness and meditation, preparing meals by an open fire, and the daily setting up and breaking down of camp sites. Participants will learn primitive skills like starting a fire from nothing but natural materials or making a flute out of aspen wood. And they will have time to work on their individual therapy assignments.

The Jewish component of BaMidbar Wilderness Therapy will bring elements of Jewish wisdom to bear on the challenges facing individuals in their own lives. Family relationships, for example, may be addressed through stories in Genesis, Hanselman said, like the conflict between Joseph and his brothers. The story of Nachshon ben Aminadav, the biblical figure who led the Jewish people into the Red Sea during the Exodus, is used to teach courage in the face of the unknown.

“This is a story that’s really central to the philosophy behind the program, this idea that it’s challenging to leave a difficult situation,” Hanselman said. “For our students, it’s about understanding that it doesn’t take a character that’s put on a pedestal to always be the one to create change. You have agency over the course of your life. Sometimes it takes walking out into the unknown without knowing what’s before you and taking that step to make it where you need to go.”

BaMidbar Wilderness Therapy emerged out of a conversation several years ago between Bock and Cliff Stockton, a veteran wilderness educator who teaches at Camp Ramah. A resident of tiny Hagerman, Idaho, Stockton, 60, has spent decades working with troubled youth in wilderness settings and was struck by how many Jewish kids had gone through such programs.

“There are some wilderness programs out there that have almost 40 percent Jewish participation,” Stockton said. “This is a huge need. We weren’t doing anything.”

Though some programs have been willing to accommodate Jewish needs around kosher food and avoiding certain activities on Shabbat, that isn’t always feasible. More significantly, many of these programs tap into spiritual themes, particularly Native American spirituality, which to those involved in the BaMidbar program seemed like a missed opportunity. 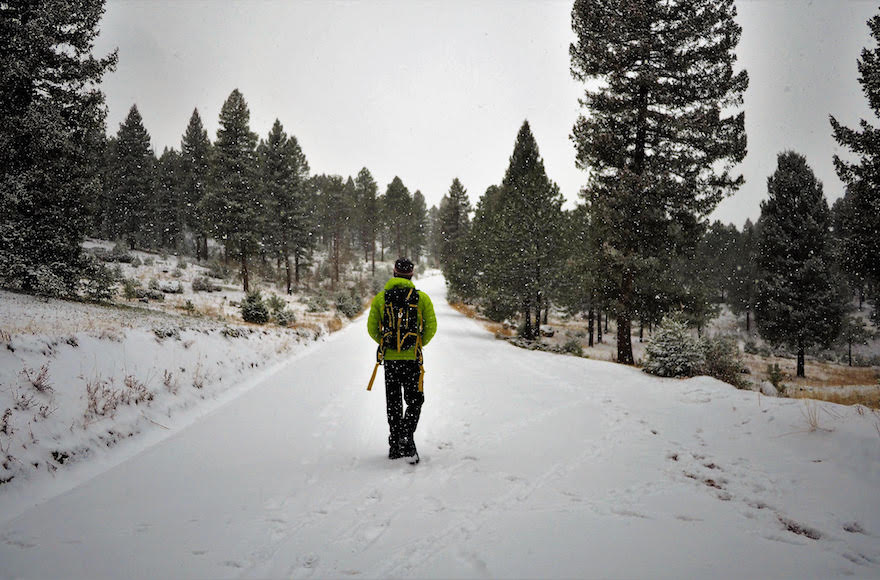 “Wilderness therapy programs rely heavily on Native American metaphor, storytelling and ritual to help students understand their wilderness experience in the context of a vision quest and rite of passage,” Hanselman said.

“The Jewish tradition provides such powerful support, strength and guidance,” she noted. “Why must we turn to other traditions to find rituals that help us mark and effect change, stories that speak to facing and overcoming adversity, and values that help us define our personal understanding of living well? Judaism speaks to that so strongly already.”

Starting in late January, BaMidbar Wilderness Therapy will have 16 slots available for participants aged 18-26; they may stay as long as necessary. The program costs $485 per day, which according to Bock is on the cheaper end of the scale for such programs. With a typical stay in a wilderness therapy program averaging about 60 days, that amounts to approximately $30,000 per residency.

Scholarships of up to $200 per day are available for the Colorado program, which is partially supported by the Charles and Lynn Schusterman Family Foundation. Bock is a veteran of the Schusterman Fellowship, a leadership program run by the Schusterman Foundation that is designed to help participants use Jewish organizational leadership to create transformational change in the world.

In its first year, BaMidbar Wilderness Therapy will break over the summer while Ramah overnight camp is in session to allow for tweaking and evaluation. But eventually the program will operate year-round, including during the chilly mountain winters that can see nighttime temperatures drop well below zero. Ramah will outfit all participants for the elements, providing heavy duty boots, sub-zero sleeping bags and other essential outdoor gear. In really cold weather, participants will sleep in teepees with a mobile wood stove for heat.

The first participants are scheduled to arrive near the end of January, with more to follow.