Israeli farmers claim they developed the world’s smallest tomatoes. So what can you do with them? 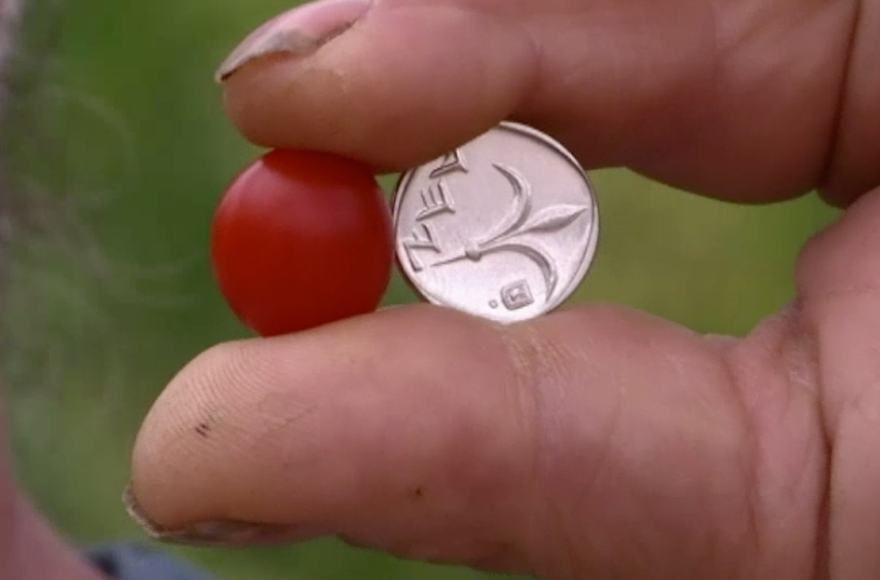 The Israeli company Kedma claims it has grown the world's smallest tomatoes, which are about the size of a blueberry. (Screenshot from Australian Broadcasting Corporation)
Advertisement

JERUSALEM (JTA) — Israelis love their tomatoes. They eat them whole, sliced, diced and cooked. Nearly half of Israelis, in a survey taken a couple years ago, said tomato is their favorite vegetable (okay, it’s technically a fruit, but never mind), and that they eat it almost every day.

Many of them must have been pleased at the announcement earlier this week that farmers here have developed what they believe is Israel’s — and perhaps the world’s — world’s tiniest tomato.

According to its developers — the agriculture tech company Kedma, based in the southern Arava desert — the “tipa tomato” or “drop tomato” is about the size of a blueberry and is also the sweetest of its kind on earth. It comes in red and yellow varieties.

The seeds for the new tomatoes were obtained from a company in Holland. Farmers in Israel, with the help of the Central and Northern Arava Research and Development Center, modified the tomato to withstand the dry conditions of the Israeli desert.

The producers said that they intended the tomato for Israeli consumption, but the new breed has gotten plenty of attention worldwide.

Of course, normal cherry tomatoes are already small — so what can you actually do with a tomato that’s even tinier? Here are some options.

The tomato’s producers think that Israelis will just pop them in their mouths as convenient snacks. But those Israelis who don’t particularly like tomatoes — and there are some — might need something more gimmicky.

If one dried these tomatoes, could they become the tomato version of raisins, perfect for snacking and baking?

Chopped tomato pieces are an essential part of the classic Israeli salad. But if chefs just used these mini tomatoes in their salads, there would be no need for chopping — and they wouldn’t make such a juicy mess in their kitchens.

How about dumping a cup of the minuscule tomatoes into a savory muffin recipe? Or even substituting them for chocolate chips in your favorite cookie recipe?

Ok, this suggestion has no culinary value — but these tomatoes could make very interesting projectiles when blown through a straw.

It’s worth noting that the cherry tomato is not an Israeli “invention,” as some have claimed. They may actually date back to 15th century Aztec Mexico, or even earlier. Yellow cherry tomatoes were first cultivated in Europe in the 16th century, according to the British Tomato Growers Association.

However, Israelis were instrumental in helping cherry tomatoes become a staple in European and American kitchens by the 1990s. In the 1970s, a British grocery chain enlisted Israeli scientists to develop a sweet, shelf-stable version of the food that could be grown in neat rows — and the rest is history. That’s why Israeli Prime Minister Benjamin Nentanyahu felt confident enough to stand before the U.N.General Assembly in 2015 and declare that the cherry tomato “was perfected in Israel, in case you didn’t know.”