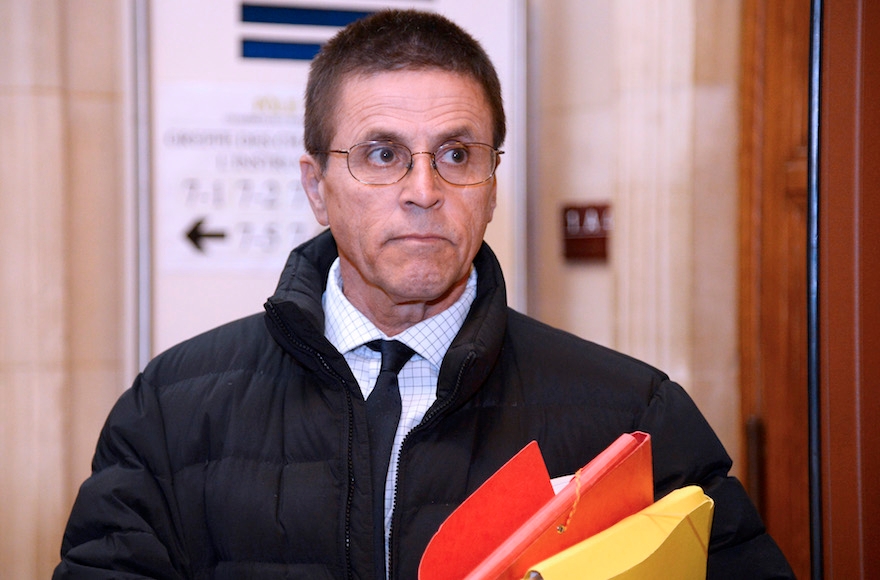 Hassan Diab, who was arrested in November 2008 for his alleged role in a 1980 Paris synagogue bombing, arrives at a courthouse in Paris, May 24, 2016. (Bertrand Guay/AFP/Getty Images)
Advertisement

(JTA) – French Jews protested the release of a man who was extradited from Canada on suspicion that he was involved in the 1980 bombing of a Paris synagogue.

CRIF, the umbrella group of French Jewish communities, said on Friday that it was “indignant” about the release of Hassan Diab, a Lebanese-Canadian academic accused in the 1980 bombing of the synagogue on Copernic Street, which killed four people. Diab has denied any connection to the act, which Israel and other Western countries believe was the work of terrorists from the Popular Front for the Liberation of Palestine.

Earlier this week a judge said the prosecution did not have enough “convincing” evidence on Diab and released him.

“CRIF calls on the public prosecution to appeal the release,” a CRIF spokesperson wrote  in a statement.

“This release without trial of the main suspect is an insult to the memory of the victims and adds to their relatives’ pain,” said CRIF President Francis Kalifat in the statement.

Separately, a lawmaker for the far-left France Insoumise party defended Marwan Barghouti, a Palestinian leader who is serving multiple life sentences in Israel for acts of terrorism.

Clémentine Autain said earlier this week in a television interview that Barghouti “is not a terrorist but an activist and political prisoner.”

Barghouti, a military commander within the armed wing of the PLO during the second intifada, was sentenced by an Israeli court in 2004 to multiple life sentences for planning dozens of deadly terrorist attacks.

Speaking about Israel, she added in the interview with i24 News: “I think that today the policies of the Israeli government are in a state of radicalization and dangerous authoritarianism, it’s a far-right government.”

CRIF has accused the communist politician Jean-Luc Melenchon and other members of the Insoumise party of anti-Semitic rhetoric, calling that party “no better” than the far-right National Front party.

Melenchon has denied making any anti-Semitic statement, maintaining he is merely a critic of Israel’s policies.