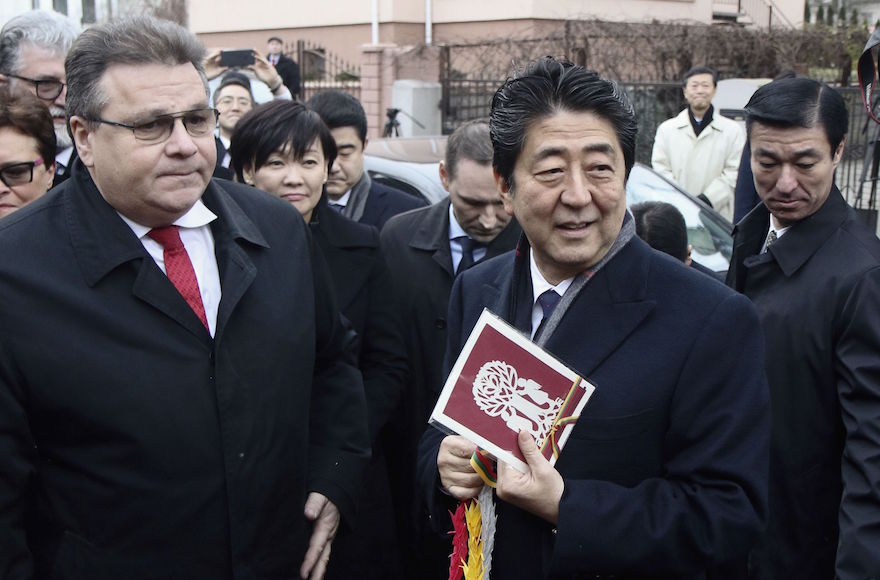 (JTA) — Japanese Prime Minister Shinzo Abe visited a museum in Lithuania commemorating Chiune Sugihara, a Japanese diplomat who saved thousands of Jews from the Nazis during the Holocaust.

Abe visited Sugihara House, the former Japanese consulate in Kaunas, which was the capital of Lithuania at the time of World War II. He toured the site and sat behind what had been Sugihara’s desk, according to reports.

As Japan’s imperial consul in Lithuania, Sugihara defied orders from his superiors in order to issue at least 2,000 visas, and as many as 6,000 according to some reports, to Jews between 1939 and 1940. He is sometimes called the “Japanese Schindler,” a reference to Oskar Schindler, who saved at least 1,200 Jews by employing them in his factories in Poland.

“The courageous and humanitarian action of Mr. Sugihara provides us with guidance as to how to we should survive in this world, where rule-of-law-based international order is being challenged in various forms,” Abe said during his visit Saturday.

“Sugihara’s courageous humanitarian acts are highly rated around the world. As Japanese, I’m very proud of him.”

Abe’s visit to Lithuania was the first by a Japanese prime minister.