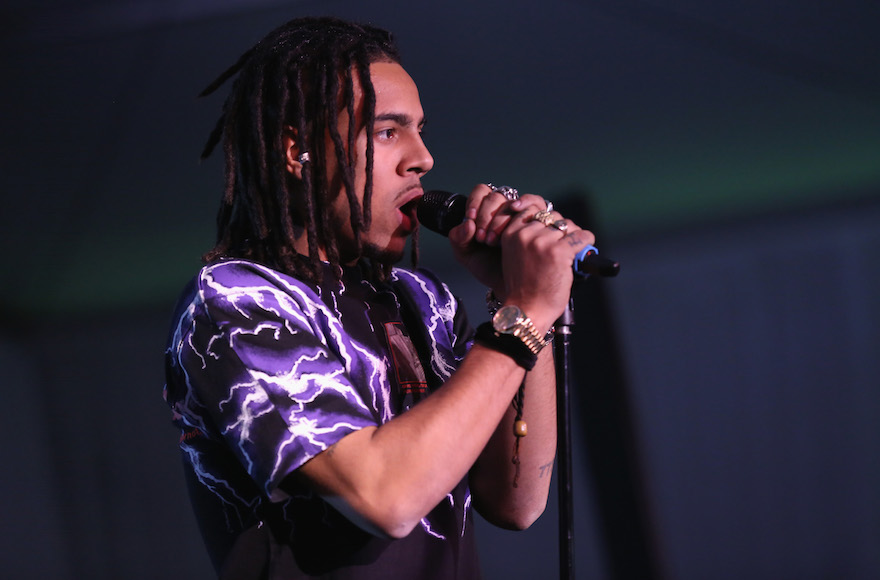 In the essay published in Time on Friday, ahead of Martin Luther King Day, Mensa said he traveled last summer to “Palestine” with a group of African-American artists, scholars and activists organized by the Florida-based organization Dream Defenders.

“My criticism lies with the treatment of Palestinian civilians by the state of Israel, no more and no less. As a black man in America, being stereotyped as a criminal is more than familiar to me, as is being unwanted on the streets of my own home and profiled by law enforcement,” Mensa wrote.

He described meeting a Palestinian woman named Nora who has been in a legal struggle with the state of Israel since the 1980s to keep her eastern Jerusalem home. He also described visiting a Bedouin camp, where he was urged to pressure the U.S. government to place pressure on Israel to allow the nomadic Bedouin to live where they want.

Various Israeli governments have supported the creation of recognized Bedouin villages, saying it would make it easier to develop housing and infrastructure.

Mensa also describes seeing the wall separating parts of Israel from the West Bank. “It’s as if the South Side of Chicago’s most forgotten and disenfranchised neighborhoods were separated from the luxury of Downtown’s Gold Coast by a simple concrete wall,” said Mensa, a Chicago native.

Israel says it constructed the wall in the wake of a series of deadly terrorust attacks.

The rapper, whose new music video for his song “We Could Be Free” features footage of the West Bank, admits to not having a full understanding of the conflict. “The blood on both sides runs deep. I do not pretend to be familiar with every nuance of the longstanding turmoil that engulfs Israel and Palestine; it is no doubt as aged and tangled as the family trees ripped apart by its brutality. I can only speak to the experiences I had there,” he writes.

He professes his horror at Palestinian boys facing a mandatory minimum sentence of four years in prison for throwing stones, for example, without mentioning the deaths of Israeli adults and children in some of those attacks.

“As with the black community in the U.S., the use of incarceration, racial profiling and targeting the youth as methods of control are heavily prevalent in the occupied West Bank. The main difference I see between our oppression in America and that of Palestinians is how overt and shameless the face of discrimination is in the occupied West Bank,” Mensa also wrote.

He said of his visit: “For once in my life I didn’t feel like the nigger. As I sat comfortably at a coffee shop, gawking at a group of Israeli soldiers harassing a Palestinian teenager, it was clear who was the nigger. My American passport, ironically, had awarded me a higher position in the social hierarchy of Jerusalem than it did in my hometown of Chicago. As insensitive as it sounds, it was almost a feeling of relief to be out of oppression’s crosshairs for a moment, albeit a very short one.”

Mensa recently appeared in CNN’s “United Shades of America” to speak out about Chicago’s education system. In 2016, he protested at Standing Rock and called out U.S. President Donald Trump as a racist on the late-night television talk show Jimmy Kimmel Live, according to the music website Pitchfork.com.