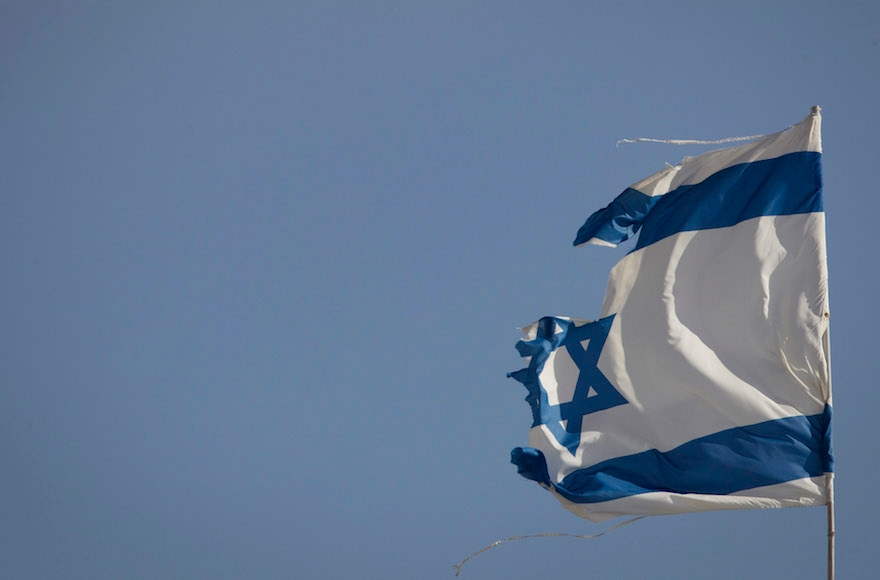 A torn Israeli flag seen at the Gevaot settlement near the West Bank city of Bethlehem. (Miriam Alster/Flash90)
Advertisement

WASHINGTON (JTA) — The Arab-Israeli conflict is entering a phase more likely to lead to resolution than any that preceded it. The mindless mantra “there is no alternative to the two-state solution” is giving way to reality. The Palestinian Authority has never been a partner for peace. A 23rd Arab state shoehorned into Israel would solve nothing. And plenty of superior, principled alternatives exist.

The two-state solution is a proven failure. A bad idea, derived from a lie, perpetuating instability and suffering. It is, in fact, a relabeling of the PLO’s 1974 Phased Plan: the PLO announcement that it would “liberate” territory piecemeal and wage its genocidal war from each new parcel.

The relabeling was designed to give plausible deniability to those who regret allowing the long-suffering Jews to exercise self-determination. That it sucked in Israelis tired of policing hostile Arab towns and Diaspora Jews chasing approval and acceptance was an added bonus. Tragically, the scheme achieved its primary goal: It recast one of the world’s most tolerant, multi-ethnic, peace-loving, life-affirming bastions of human rights as an illegitimate oppressor.

How did this defamatory campaign deceive so many into believing such an obvious absurdity? Particularly when, for decades, no decent person supported a terrorist PLO state? When as late as 1980, even anti-Israel Jimmy Carter said he was “opposed to an independent Palestinian state” because it would be a “destabilizing factor” in the region?

It began in the early 1990s, when elements of the Israeli far left and the PLO — in clear violation of Israeli law — hatched a “peace” plan: The Arabs would concede the legitimacy of Jewish self-determination in the historic Jewish homeland and, in return, Israel would accept the lie of a distinct “Palestinian” people, partition the homeland (yet again) and create a quasi-governmental Palestinian Authority. Israeli Prime Minister Yitzchak Rabin agreed — with the caveats that Israel would never concede any part of Jerusalem and never accept a new Arab state. Pocketing these enormous concessions, the PLO dug in.

President Bill Clinton injected the U.S. to finalize the Oslo Accord of 1993. Suddenly, terrorist Arafat was a statesman and the terrorist PLO a government. In 1998, with PLO terrorism still active, first lady Hillary Clinton sent shock waves when she implied support for an independent Palestine; the White House’s repudiation was immediate and unequivocal.

In 2000, Israeli Prime Minister Ehud Barak broke the final taboos, offering the PLO a state and parts of Jerusalem. Arafat responded by launching a terror war. Barak and Clinton sweetened the offer. Arafat was clear: He preferred war.

Arafat’s rejection should have ended the charade. But as Arafat foresaw, Oslo’s inversion of oppressed and oppressor hopelessly warped global public opinion. The 21st century has enshrined Arafat’s fabrications while challenging Jewish history. It ignores the character of leadership and culture, bestowing honors upon Arab terror movements while defaming Israel’s liberal democracy. It vilifies those — like George W. Bush and Benjamin Netanyahu — who would condition statehood on evidence of a willingness to coexist. No longer a stratagem for peace, “Palestinian” statehood has become an entitlement.

But 21st-century events have demolished the broader myth system on which “Palestinian” peoplehood rests. Iraq and Syria have followed the Lebanese path. As those multi-ethnic European constructs collapsed, their citizens quickly shed the state-based identities they had been assigned in favor of the ethnic- or faith-based identities that had defined their families for centuries. They fight — and die — as Sunnis, Shiites, Kurds, Alawites, Druze and Christians.

That collapse is hardly coincidental — and it is highly relevant. There have never been distinct Iraqi, Syrian, Lebanese — or Palestinian — nations. Having all but purged their once-vibrant Christian minority, today’s “Palestinians” are merely Sunni Arabs whose patrilineal ancestors resided west of the Jordan River during the final two years of the Mandate for Palestine. A new state affirming misguided labels that European imperialists imposed upon the indigenous peoples of the Middle East cannot possibly help stabilize the troubled region.

The clear alternative is a return to the pre-Oslo reliance on responsible state actors – i.e., Egypt, Jordan, Saudi Arabia and Israel — to provide citizenship and opportunity to the stateless Arabs. The sooner Israel stops paying lip service to the “two-state” lie, the sooner it can leave behind its self-inflicted wounds. The primary objections to this have always been that a, the world will condemn Israel, and b, those countries won’t comply. Both are absurd. The world condemns Israel freely already, and the United States can ensure those countries are incentivized to comply.

To achieve the stability the region so desperately needs, the Arab states must reintegrate nearly 20 million displaced or stateless Arabs chafing beneath artificial Syrian, Iraqi, Lebanese or Palestinian labels. Far from laying this issue at Israel’s feet, any “solution” to the Arab-Israeli conflict must arise within that regional context. The international community should treat Arab refugees like it treats other refugees — humanely rather than as political pawns and cannon fodder. Integrating them into communities with whom they claim ethnic and cultural kinship is the best way to help refugees build new lives.

The myths of “Palestinian peoplehood” and a “two-state solution” have impeded peace, stability, security, development, regional integration and justice. Arab terrorists lauded as martyrs and freedom fighters murder and maim Jews. Jew-haters treating Arabs as expendable rob millions of educational and economic opportunities, basic dignity and decent lives. The American Jewish community tears itself apart. College students from Christian and Jewish Zionist homes find themselves supporting an Israel defamed across campus as an oppressor. And in living memory of the Holocaust and of the miraculous return of Jews to their indigenous homeland, the United Nations – supported by an outgoing American president – denies the Jews’ connection to Judea and demands their ethnic cleansing. All in the service of a lie.

Reality-based plans have languished in the face of Oslo’s persistent myths. All start from two key principles: Israeli sovereignty must continue within secure borders, and the Arab states must assume primary responsibility for the welfare of Arab refugees. These principles are grounded in history, morality and law, in Jewish security and Arab development, and in the critical goal of regional stability.

What has worked around the world will work in the Middle East if the Arabs allow it to work. The Arabs will allow it only if pushed. President Donald Trump, for the first time in history, has begun to push in the right direction.

(Jeff Ballabon is CEO of B2 Strategic, a senior fellow at the American Conservative Union’s Center for Statesmanship and Diplomacy, and an adviser to Donald J. Trump for President, Inc. Bruce Abramson is the president of Informationism, Inc., vice president and director of policy at the Iron Dome Alliance, and a senior fellow at the London Center for Policy Research.)