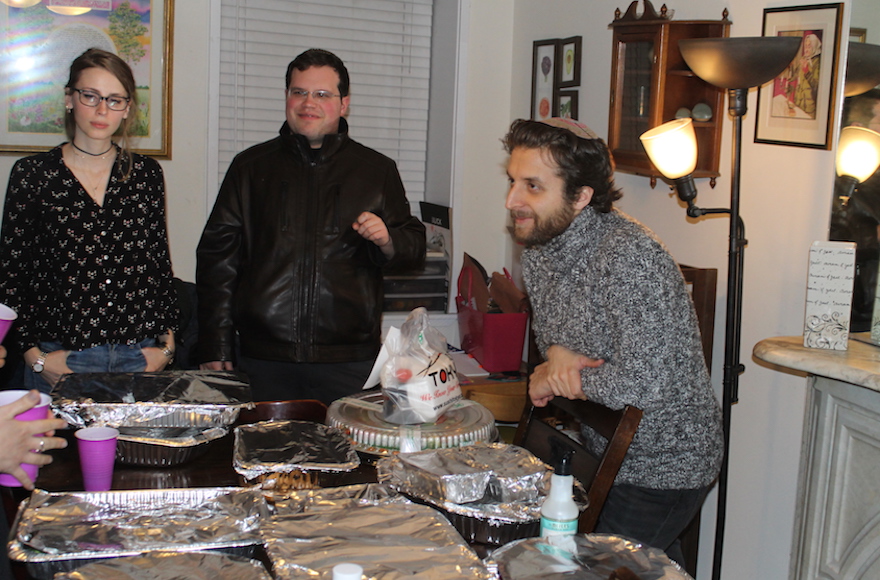 NEW YORK (JTA) — At a small stove in the kitchen, a man exploring conversion to Judaism is frying tofu with red onions.

Chatting with him is a woman who works for a Conservative rabbinical seminary. Across the room is a recent college graduate who, raised in a secular home, decided to keep kosher on her own at age 9. She is standing next to Avram Mlotek, 30, an Orthodox rabbi who shares the downtown Manhattan apartment with his wife.

The crowd of 15 is not there to eat the hearty vegetarian spread. Instead, on this Tuesday night, one participant gives a brief speech comparing the weekly Torah portion to the upcoming Women’s March. Then the group heads over to a nearby homeless shelter and serves the food they had cooked to the men staying there. They have been cooking this weekly dinner since 2015, when Mlotek decided to walk over to the shelter, introduce himself and ask if the residents wanted any help from some millennial Jews.

“There are stories in the Talmud, before you go out to daven, you go out to give tzedakah,” Mlotek told JTA ahead of the event, using Yiddish and Hebrew words for praying and charity, respectively. “I think that, for me, is what Jewish spirituality is. It’s not solely focused on one’s individual needs. It’s in partnership with the community.”

Mlotek and his wife, Yael Kornfeld, run one outpost of Base Hillel, a new organization aiming to be a pluralistic Jewish salon for the post-college set. The organization employs rabbis and their spouses to open their homes to young Jews across the country and engage them in Jewish ritual, study and service programs. Since it was founded in the summer of 2015, it’s drawn more than 8,000 participants.

“There is a trope that millennials don’t care about community or commitment,” said Faith Leener, Base Hillel’s co-founder and director. “And it’s not true. Millennials want something to believe in and feel committed to. They want something to feel grounded in in a really ungrounded stage of life.”

Leener and her husband, Jonathan, started the organization with Mlotek and Kornfeld after recognizing that they were already doing this work — hosting informal Jewish programs in their Manhattan apartments — just without funding. The project has since been adopted by Hillel International, the campus Jewish network, which has long sought a place for twentysomethings to land after college. Its name, Base Hillel, is a pun on the Hebrew for Hillel House.

Mlotek and Jonathan Leener are both alumni of Yeshivat Chovevei Torah, the liberal Orthodox seminary here. Other rabbis come from the Conservative Jewish Theological Seminary and Hebrew Union College-Jewish Institute of Religion, its Reform counterpart. The organization now runs a total of nine houses in New York, Chicago, Los Angeles and a few other cities, including Berlin.

Some of the Base leaders have been bridging communities since they were kids. Mlotek grew up among both religious Zionists and Yiddishists — his father, Zalman, is the artistic director of the National Yiddish Theatre-Folksbiene. Faith Leener grew up in a home that regularly hosted foreign visitors as part of a government program. The Berlin Base is run by one of the first couples where both husband and wife are studying to be Orthodox clergy.

“There are not enough people who understand the potential of what it means to be a rabbi,” Faith Leener said. “It has either come to mean you’re a pulpit rabbi or a teacher, and what a rabbi really can be is a community organizer, a pastoral counselor, a spiritual guide, charismatic speaker. The pulpit can be a neighborhood.”

Base occupies a middle ground between the home- and synagogue-based outreach of Chabad, the outward-looking Hasidic movement, and Moishe House, a network of apartments where young Jewish singles host social and holiday events in exchange for rent subsidies. While Chabad offers its services to all comers, its guiding philosophy is haredi Orthodox. Base is intentionally more pluralist; Mlotek, for example, courted controversy last year by arguing that Orthodoxy should do more to embrace intermarried couples. But it’s also more religious than Moishe House, placing an emphasis on Jewish observance and pastoral counseling.

“I feel like Moishe House is the JV team and they’re the varsity team,” joked Suzanne Greene, a member of the West Village Moishe House who collaborates with Mlotek’s Base. “We do this with our free time. They’re pros. They’re able to bring a level of depth and authenticity in the most fun, accessible and warm, welcoming way.” 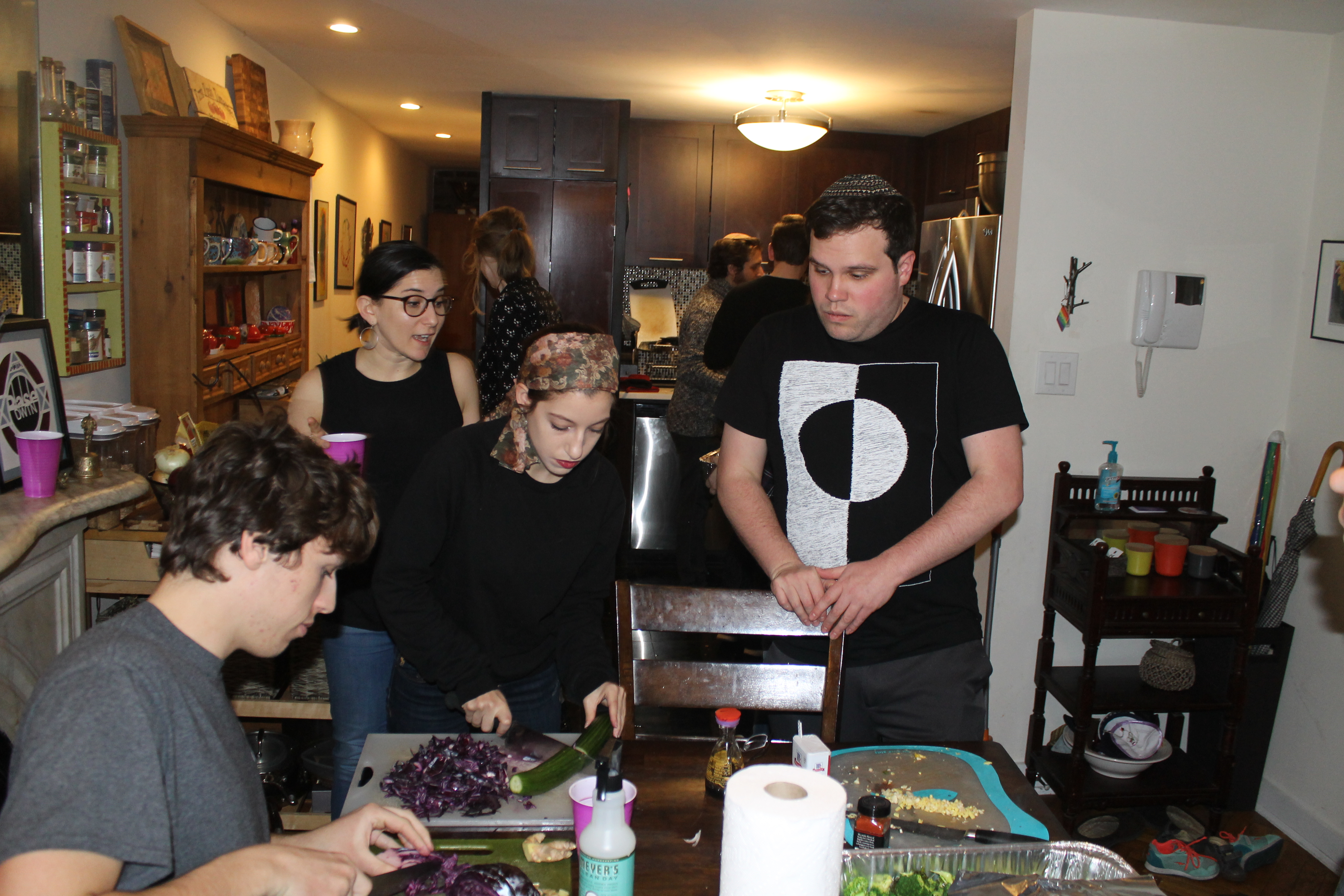 Participants prepare food for the homeless during an event at Base Hillel’s Base DWTN branch in New York’s Flatiron/Union Square neighborhood. (Ben Sales)

After returning from the homeless shelter on Tuesday night, Mlotek led a class on the weekly Torah portion where he acted equal parts facilitator and participant. He sat in a circle with his students in a living room that boasted Jewish books, a vinyl collection and a diaper-changing pad. He alternated between teaching a lesson and debating interpretations with his students.

It’s one of several regular events at the apartment. The couple regularly host Shabbat dinners, as well as an “ask-me-anything” session on Judaism. Mlotek said much of his time involves one-on-one meetings with young Jews.

“I always feel in this place I’m in the company of true, genuine, curious scholars,” said Jared Gimbel, 29, a regular Base attendee who attended Orthodox day school and then distanced himself from Judaism for a few years. “A lot of personality types really come to Base. We have exchanges, and what’s more, we realize that every person here has very, very deep stories that deserve to be told and deserve to be shared.”

The organization’s pluralistic approach has drawn a tapestry of involved and unaffiliated Jews, mostly in their mid- to late 20s. A survey commissioned by Base and conducted by Jewish sociologist Steven M. Cohen showed that, for example, 13 percent of participants in New York last year were from non-Jewish homes and 21 percent Orthodox. Thirty percent went to Jewish day school, while 21 percent had no Jewish education.

Samantha Bowser, 30, a former high school classmate of Mlotek’s who comes to Base weekly, said she finds it difficult to be fully herself at Orthodox or Conservative synagogues.

Base is still in its formative years — expanding across the country, seeking long-term funding and figuring out what programs work. Cohen, the sociologist, noted that it still doesn’t have anything close to the scale of Chabad, whose husband-and-wife teams of shluchim, or emissaries, run thousands of houses, schools, camps and other institutions.

It also isn’t clear what will happen in five or 10 years, as the rabbis and their spouses approach middle age and are no longer peers with the young adults they seek to serve.

Kornfeld, Mlotek’s wife, is a full-time social worker aside from her Base work (Mlotek serves Base full-time). She loves seeing her apartment filled with guests on Friday nights, and feels inspired hearing about the highlights of their week. But she isn’t sure she’ll have the same enthusiasm as their two kids, now toddlers, grow older.

“My hope and my dream is that it keeps growing,” Kornfeld said. “How long is this sustainable for our family? It certainly can get in the way of bedtime. That’s definitely something we’ve talked about.”

Her husband, for his part, also isn’t sure what the future will bring. But, smiling and leaning back in his chair in a third-wave cafe that donates part of its proceeds to charity, Mlotek sounds, for now, like he’s found his calling in ministering to the young Jews of Manhattan.

“I get paid to host Shabbat meals, to teach Torah in my backyard,” he said. “You give people something that’s authentic and open and engaging, they’re thirsty for more. They’ve fueled my passion for learning, for community.”