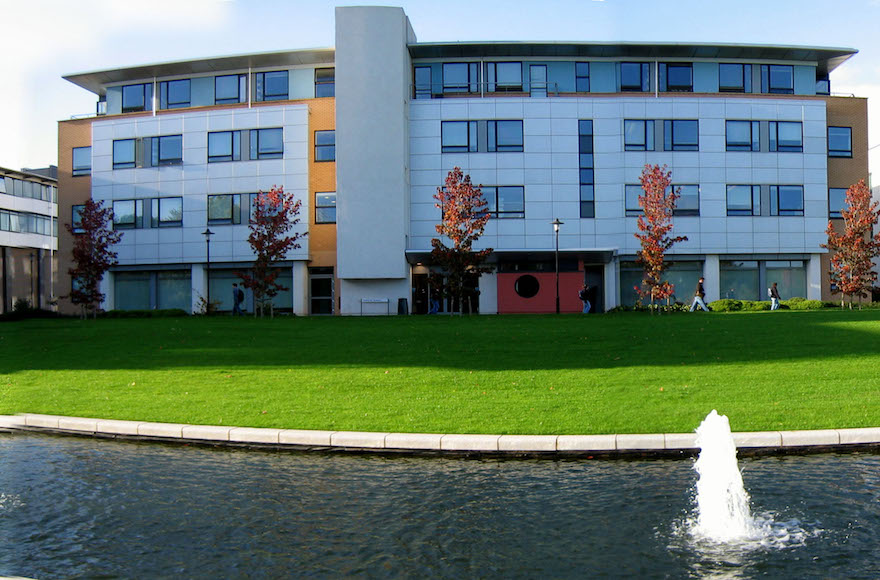 A building on the University of Warwick campus. (Wikimedia Commons)
Advertisement

(JTA) —  A British university is responding to complaints that Jews were barred from a lecture alleging Israel was intentionally undermining the fertility of Palestinians.

The university has received a complaint that at least three Jews were barred from the event, which was advertised as open to the public, the spokesman also said.

“A complaint has been made to the University about this event which we are now considering and which we will respond to,” university spokesman Tom Frew told JTA.

David Collier, a journalist and blogger on anti-Semitism, said he and two other Jews, Mandy Blumenthal and Yochy Davis, were stopped at the entrance to the lecture room by Lisa Tilley, a member of the faculty at Warwick’s School of Politics and International Relations. He wrote that she asked to see their identity cards and refused to admit them into the room after inspecting them.

Contacted by JTA, Tilley said the event in question was attended by “many members of the Jewish community at Warwick.”

According to the Warwick University’s Jewish/Israeli society, the event had a turnout of 10 to 15 people, including two members of that society, and did not feature anti-Semitic rhetoric, the Jewish Chronicle reported. Tilley wrote in an email to JTA: “I did not personally ask Mr. Collier or his companions for ID.”

“All allegations of anti-Semitism in relation to me, the speaker, or anyone present are completely false.” She added Collier’s “physical and verbal intimidation tactics were very much on display on Wednesday.”

The event was a lecture by Sigrid Vertommen, a researcher from the Department of Global Health and Social Medicine at King’s College London. The invitation to the event said that Israel’s policy of subsidizing multiple fertilization procedures for its citizens is “primarily aimed to serve the reproductive rights of its Jewish population at the expense of the indigenous Palestinian population.”

Israel has 1.2 million Arab Palestinian citizens, who are entitled to the same medical benefits as all other citizens.

“Rather than understanding Israel’s fertility policies in terms of rights, choice, peace and reconciliation,” the invitation to the event read, “it will propose a reproductive sabotage framework.”

Vertommen did not reply to a JTA request for comment.

Shimon Samuels, the director of international relations for the Simon Wiesenthal Center, said the charge that Israel would “sabotage” Palestinians’ fertility recalled the “blood libel” historically leveled at Jews. The charge betrayed an “anti-Semitic bias” that contributes to making the University of Warwick “the leading university in the United Kingdom in terms of denying Israel’s right to exist,” he told JTA.

In 2013, the university paid $1,380 to an Israeli student, Smadar Bakovic, who complained that a supervisor assigned to her had a bias against her because of her country of birth.