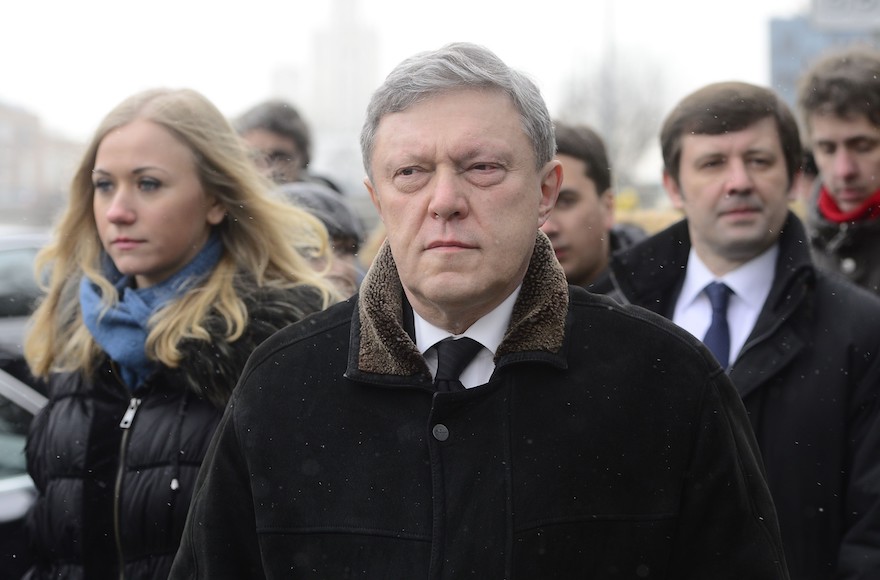 (JTA) — The barring of Russia’s main opposition leader from the presidential race there may be bad for democracy, but it’s a boon for Grigory Yavlinsky, a Jewish liberal politician who is now emerging as the main challenger against the powerful Vladimir Putin.

Yavlinsky is an economist and former deputy prime minister whose mother, Vera Naumovna, was Jewish. On Wednesday, he collected and submitted to the central elections board the 100,000 signatures required to enter the presidential race in March.

That makes him the only widely recognized opposition figure in the race following the barring last month of Alexei Navalny, a nationalist challenger who was disqualified over his 2014 fraud conviction — a conviction that the top human rights court in Europe said was trumped up by the Russian judiciary under Putin.

Of course, that doesn’t mean that Yavlinsky, a co-founder of the Yabloko party, actually has a shot at becoming president.

Elections are widely considered to be rigged in Russia, a country that was ranked more restrictive than Iran and Yemen in the Freedom House “Freedom in the World 2017” index.

But Navalny’s elimination does mean that Yavlinsky, 65, whose best electoral result was 7.4 percent of the vote in the 1996 presidential elections, now has a chance of rallying the fractious opposition behind him. And that may allow Yavlinsky to at least put a dent in Putin’s near-certain victory, according to Roman Bronfman, a prominent Russia analyst from Israel who, like Yavlinsky, grew up in what today is Ukraine.

“If Navalny endorses Yavlinsky, he may well reach an important achievement in the elections because opposition to Putin is strong, albeit suppressed,” Bronfman told JTA.

Navalny reached such an achievement in the 2013 Moscow mayoral elections, finishing second to the ruling party’s candidate with 27 percent of the vote. It may well have been the reason he was marked for political elimination.

Boris Nemtsov, another Jewish opposition leader who used to be deputy prime minister, was killed near the Kremlin in 2015 after saying he would run against Putin in 2018.

But without Navalny, Yavlinsky is not likely to attract many votes, according to Bronfman.

“He’s too liberal,” Bronfman said of Yavlinsky, who opposed Russia’s war in Chechnya and even traveled to that predominantly Muslim area of Russia to negotiate a truce in the 1990s — offering himself to rebels as a hostage in exchange for the release of others. “And he’s not charismatic; he has none of the energies that Navalny has going for him.” 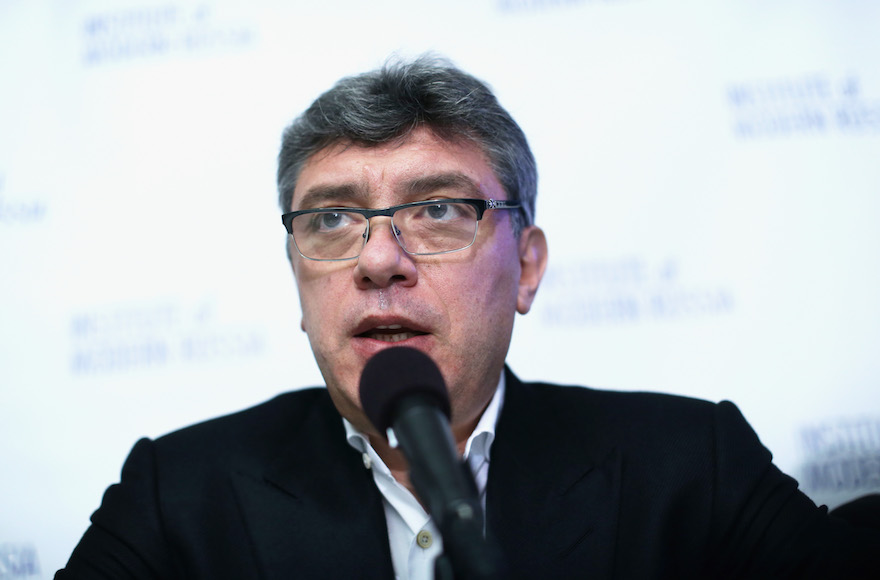 Boris Nemtsov, shown in 2014, was another Jewish opposition leader. He was killed near the Kremlin in 2015 after saying he would run against Vladimir Putin in 2018. (Alex Wong/Getty Images)

Like Nemtsov, Yavlinsky has been a consistent opponent of Russia’s 2014 annexation of Crimea — a position that has earned him death threats from nationalists who revile him as a traitor. It also makes it hard for a nationalist like Navalny to endorse Yavlinsky.

Navalny has shown no intention of backing Yavlinsky. In fact, the disqualified opposition leader is calling for a protest boycott of the election – a move that is unlikely to shake Putin’s absolute hold on power but has a very real potential of crippling the Yavlinsky bid.

The boycott call is dividing the opposition, according to Andrey Kalikh, a Russian political and human rights activist and journalist.

“On one side of the barricades, there’s the forces who unite around Navalny’s call” for a boycott, he wrote in an op-ed published Thursday on the website Open Democracy. On the other side, “there’s the ruling party as well as the liberal party Yabloko and Ksenia Sobchak,” an independent candidate and television presenter who also has Jewish roots.

Sobchak is among the dozens of individuals who have announced their intention to run for president but have yet to submit the required 100,000 signatures. They have until Jan. 31 to do so.

All of the registered candidates challenging Putin in the elections — including Vladimir Zhirinovsky, who has inveighed frequently against Jews — have said they have Jewish roots.

If Yavlinsky’s participation in the vote is approved, he will become the third registered candidate in the March election after the Communist Party’s Pavel Grudinin — an unlikely choice for many Russians with bitter memories of communism — and Zhirinovsky, an ultranationalist provocateur who is equally unlikely to appeal to freedom-seeking voters fed up with Putin.

Which is part of the reason that Bronfman believes that Yavlinsky’s origins won’t hurt him electorally.

“Although he’s of Ukrainian descent, although he’s of Jewish origins, so are many others, on the opposition and on Putin’s side, so it’s not really a factor,” Bronfman said.

That may explain why Yavlinsky is among many Jewish politicians in Russia – figures like Yevgeny Roizman, Nemtsov and Sobchak — who speak openly of their Jewish roots.

“I never concealed the fact that my mother is a Jew,” Yavlinsky said in an interview 2001. “How can anyone renounce their mother?”

Openness is a trademark of Yavlinsky, who unusually for a Russian politician speaks candidly about his childhood and other aspects of his life.

He is unapologetic about the fact that both of his sons live in the United Kingdom – a fact that opponents sometimes cite as a sign he lacks patriotism.

In a 2016 interview, Yavlinsky said they left for security reasons after his older son was abducted in 1994. The abductors cut off part of the son’s finger and mailed it to Yavlinsky with a note reading “Unless you leave politics we’ll cut off your son’s head.” But they released the captive, who had the severed part reattached.

Yavlinsky also likes to talk about boxing, a sport he excelled in as a youth, when he was a junior champion of Ukraine in 1968.

Still, Yavlinsky’s Jewish origins have been used against him in the course of his long political career.

At one election rally — Yavlinsky ran for president in 1996 and 2000, and attempted to run in 2012 but was rejected over alleged irregularities in his list of 100,000 signatures – a heckler asked him: “How does a Jew dare to even think about becoming the president of Russia?”

A reference to persistent anti-Semitic sentiments centered on the outsized role of Jews in the communist revolution and regimes that followed. It prompted a response from Yavlinsky that he said was intended as an attempt at humor.

“’Jews have done so much harm in Russia that it is they who are obliged to take an active role in correcting the consequences,’” Yavlinsky recalled telling the heckler in the 2001 interview. “Of course, it was a joke and the audience laughed and the atmosphere immediately became lighter.”

Despite this exchange, Yavlinsky insists that Russian society is not anti-Semitic and that his popularity among some voters proves it.

“After the destruction of the Bolshevik system, it becomes clear that anti-Semitism in Russia was mainly of a state nature” and not part of society, he said in a 1999 interview with CNN. And to the degree that it does exist, “the creation of a new strong democratic state will stop anti-Semitism.”