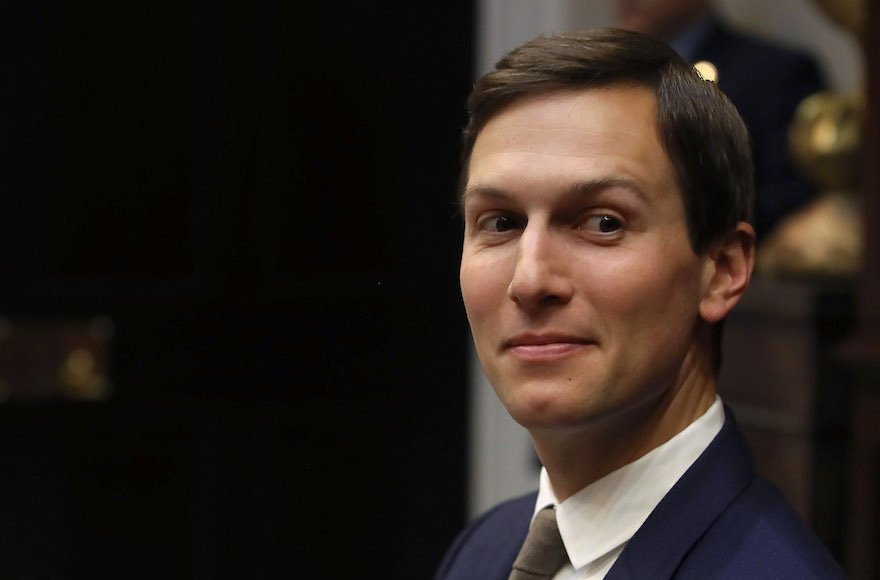 Jared Kushner at a meeting with President Donald Trump in the Roosevelt Room at the White House, Jan. 11, 2018. (Mark Wilson/Getty Images)
Advertisement

NEW YORK (JTA) — In the age of Trump, the unusual has become the norm.

But what happens when the usual is treated as the unusual? What happens when behaviors considered typical going back decades are distorted by their proximity to the 45th president?

That’s my interpretation of the dust-up this week surrounding the Frisch School, an Orthodox Jewish high school in Northern New Jersey that just happens to be the alma mater of Jared Kushner, Trump’s son-in-law and top adviser.

Early in the week, Haaretz reported that some parents at the school objected when students were encouraged to write thank-you notes to President Donald Trump supporting his decision to recognize Jerusalem as Israel’s capital. The email, sent to students Tuesday morning from Rabbi David Sher, Frisch’s director of Israel education and advocacy, included a form letter from a local pro-Israel political group, as well as instructions on how to sign and send it.

The headline of the Haaretz article charged that the “kids” at Frisch were “urged” to “write letters sucking up to Trump – and parents are fuming.”

By the time the story made it to Newsweek, its headline declared that the school “is making children write letters of support to Donald Trump.”

In fact, some parents did criticize the email due to their opposition to Trump and his policies. (If that meant the Jerusalem decision in particular, that hasn’t been made clear.) Frisch says three parents called the principal, Eli Ciner, to complain, and Haaretz reported criticism of the email found in a private Facebook group for Frisch parents.

Ninety minutes after the initial email, Ciner sent a follow-up email emphasizing that the campaign was voluntary. In a subsequent statement, Ciner said that Sher sent out the email on behalf of the school’s pro-Israel student group.

The original email also made clear — twice — that writing a letter to Trump was voluntary. The move to declare Jerusalem as Israel’s capital “was heavily criticized and it is therefore important that each person who believes that the president made the right decision have their voice heard,” the email read. “We are therefore encouraging every student who believes that the president’s decision was correct to contact the White House with words of support. It will take approximately 2 minutes of your time.”

In a statement to JTA, Ciner emphasized that such advocacy on behalf of a policy affecting Israel was standard operating procedure at the school. Sher is, after all, Frisch’s director of Israel advocacy.

“As a religious Zionist school, we encourage our students as civic minded American citizens to write to the administration when they agree or disagree with the government’s policies regarding the State of Israel,” Ciner said in the statement. “In this particular case, many of our students strongly supported the president’s decision recognizing Jerusalem as Israel’s capital.”

Missing in much of the reporting was the fact that like much of the mainstream Jewish community, most Jewish schools see teaching about and advocating for Israel a central part of their mission and a key to instilling Jewish identity. If anything, Israel advocacy training has increased as Jewish organizations invest more resources in fighting the Boycott, Divestment and Sanctions movement aimed at Israel.

The Avi Chai Foundation, one of the leading supporters of Jewish day schools, includes on its website a section on Israel Education and Advocacy. It requires all schools receiving its support to abide by a statement saying that they “seek to instill in our students an attachment to the State of Israel and its people as well as a sense of responsibility for their welfare.” It provides books on defending against anti-Israel campaigning on college campuses.

And well before Trump, such advocacy was political.

In April 2002, day schools throughout the country — Block Yeshiva High School in St. Louis, the Ramaz School in New York and the Ida Crown Jewish Academy in Chicago, to name a few — sent students by bus or plane to a pro-Israel rally in Washington, D.C. The rally was political and skewed heavily to the right. Its speakers — including Benjamin Netanyahu, Rudy Giuliani and the deputy secretary of defense at the time, Paul Wolfowitz — called on the Bush administration to support Israeli policies in fighting terrorism and to refuse negotiations with Palestinian leader Yasser Arafat.

“They drove us to every single rally,” said Shira Galston, a 2004 graduate of Ramaz. “There was no question [of] do you want to go to the rally. We’re going to the rally. Whenever there was something that happened, there was never a question of what side the school was on.”

Sivan Zakai, a professor of Jewish education at Hebrew Union College-Jewish Institute of Religion in Los Angeles, said that most Jewish schools focus on general solidarity with Israel as opposed to taking a specific position within the Israeli political spectrum. But she added that Israel activism of any kind at school is itself political.

A statement like “we are a Zionist school or we believe that part of American Judaism should be about helping students connect not only to the American polity but this other national identity,” she said, “is a political act by definition.”

Experience and intuition tell me that Orthodox day schools find it easier to reach a political consensus than the more liberal denominations when it comes to Israel, and as a result are less inhibited in their advocacy. But the passions surrounding Trump often divide even like-minded people. Critics hate the very idea of Trump, even, like the Never-Trumpers, when they tend to agree with him on policy.

A year ago, some day schools debated whether they should arrange for their kids to watch Trump’s inauguration — a classic pageant of American civic life having become an occasion for partisan rancor. At Barrack Hebrew Academy, a community day school in the Philadelphia area, administrators arranged for grades to watch the inauguration, but a space was set aside for students and teachers who chose not to.

Rabbi Judd Kruger Levingston, the school’s director of Jewish studies, wrote an essay on the decision saying that the school’s approach was “to ask the students to appreciate the Jewish concept of constructive disagreement.”

“People may disagree about the role of taxes, health care, and about a wide range of other political and social issues,” he wrote, “but we have to hold the value of a shared community above all.”

Given Trump’s unusually divisive presidency, cultivating a shared community is harder than ever. Especially when your most famous alumnus is named Jared Kushner.