Finland to probe troops’ alleged role in the Holocaust 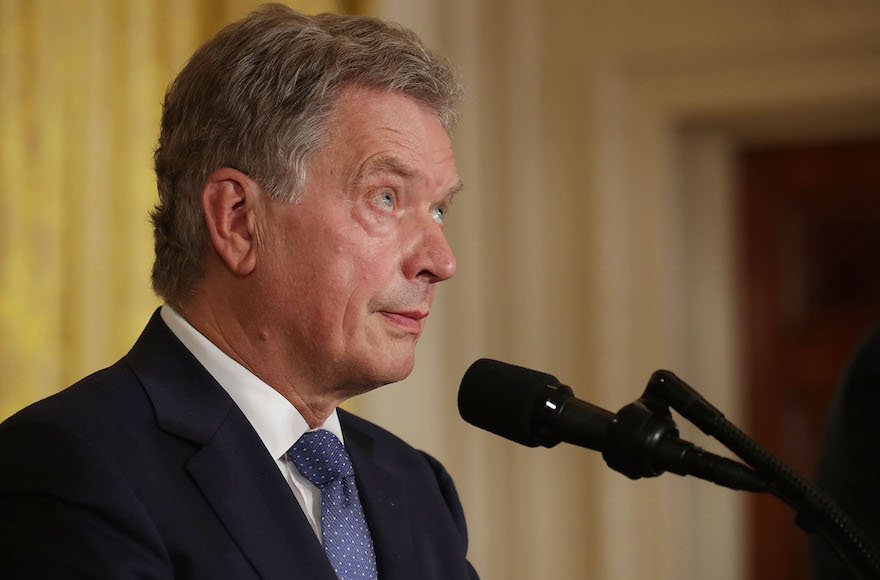 (JTA) — Finland will investigate evidence suggesting that soldiers from its army were involved in killing Jews during the Holocaust.

The announcement by the office of President Sauli Niinisto about the initiation of the probe, the first of its kind in Finland, came Wednesday in a letter to Efraim Zuroff, a hunter of Nazis for the Simon Wiesenthal Center. Earlier this month, Zuroff urged Niinisto to set up an inquiry following the discovery of written testimony by a Finnish Waffen SS officer who said he actively participated in the mass murder of Jews in Ukraine.

“The Finnish government will, in response to the recent concerns, fund a further independent survey of the operations of the Finnish Volunteers Battalion of the Waffen-SS and particularly examine its operations in Ukraine,” Hiski Haukkala, the secretary general chief of the Cabinet, wrote to Zuroff. “Should any criminal activities be uncovered they will be followed by due process,” he added.

Zuroff told JTA the probe will be “an important development” that is part of a broader process in Scandinavia, where in Denmark and Norway historians recently uncovered evidence on the roles of troops from their countries  in actively killing Jews.

The testimony suggesting active complicity in the Holocaust by at least six Finnish soldiers was discovered and flagged by Andre Swanström, the chairman of the Finnish Society of Church History.

Swanström quoted a letter by Finnish SS soldier Olavi Kustaa Aadolf Karpo to officer and military pastor Ensio Pihkala in which Karpo laments how he and his comrades were utilized for shooting Jews, when “for the execution of Jews less skilled personnel would have sufficed.”

In their letters, Karpo and fellow SS-men also protested being sent on a factory detail, while their brothers in arms got the chance to “shoot some pickle-headed Ivanovichs” – a reference to Russians. Following World War II, Karpo immigrated to Venezuela, where he died in 1988. At least five other Finns participated in the war crimes against Jews, Swanström wrote.

Finland, which for centuries has been engaged in land disputes with Russia featuring occupation, joined Germany in its attack on the Soviet Union in 1941. In the winter of 1944-45, the Finns began fighting against the Germans.

Finland had 2,300 Jews in its territory in 1939 whom it openly refused to surrender to its German ally despite repeated requests, according to the Yad Vashem Holocaust memorial  in Jerusalem. A police chief’s plan to deport in secret 300 non-Finnish Jews from the country was foiled and only eight were given over. Of those, only one survived the Holocaust.