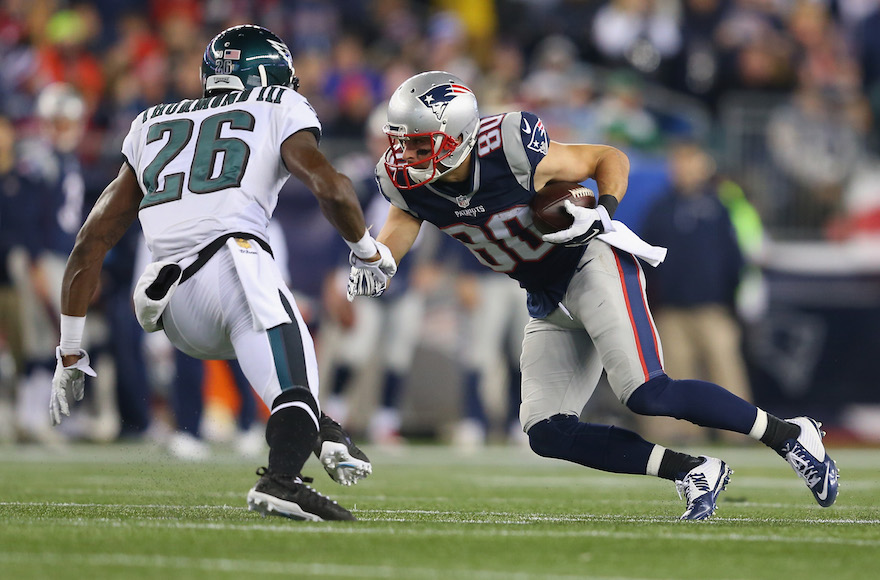 A scene from an Eagles-Patriots game in 2015. (Jim Rogash/Getty Images)
Advertisement

(JTA) — They are calling it the Tzedakah Super Bowl Wager.

Congregation Rodeph Shalom of Philadelphia and Temple Israel of Boston are making a friendly bet on next week’s Super Bowl for charity.

The synagogue from the city of the losing team will donate 18 times the point difference in the final score to the charity of the other synagogue’s choice.

Rodeph Shalom has chosen Philly Youth Basketball, which empowers youth as students, athletes and leaders. Temple Israel has chosen the CTE Center at Boston University Medical Center, which conducts high-impact, innovative research on the long-term consequences of repetitive brain trauma in athletes and military personnel. Both synagogues also urged their congregants to donate to the charities ahead of the Super Bowl.

There are cross-city Jewish ties on each side of the upcoming game. Philadelphia Eagles owner Jeff Lurie, who grew up in Newton, Massachusetts, attended Temple Israel of Boston as a child. He is a former Patriots season ticket holder and reportedly was outbid by current Patriots owner Robert Kraft in an effort to purchase the team, WHDH Boston reported.

Meanwhile, Temple Israel’s Associate Rabbi Matt Soffer is from Philadelphia and remains an Eagle’s fan. He grew up going to Congregation Rodeph Shalom.