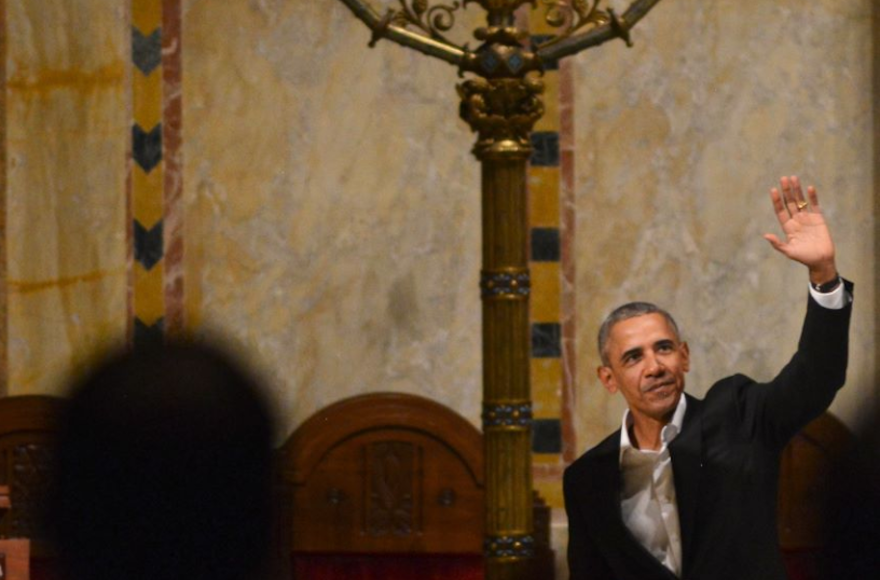 (JTA) — Barack Obama said his administration refrained from vetoing a 2016 United Nations Security Council resolution critical of Israeli settlements because the pace of their construction “skyrocketed.”

The former president, speaking Wednesday at New York’s Temple Emanu-El, also said that he and his staff would often joke that he was “basically a liberal Jew,” according to the British Daily Mail.

In the waning days of his second and last term, Obama declined to veto a Security Council resolution calling for an end to settlement construction while simultaneously declaring them illegal. President-elect Donald Trump called on Obama to veto the resolution, and Israeli Prime Minister Benjamin Netanyahu accused the U.S. of a “gang-up” with Israel’s antagonists.

“The pace of settlement construction skyrocketed, making it almost impossible to make any kind of Palestinian state,” Obama said in his synagogue talk, according to the Mail. “Voting against the resolution would have damaged our credibility on affirming human rights only when it’s convenient, not when it has to do with ourselves and our friends.”

To be “a true friend of Israel, it is important to be honest about it, and the politics of this country sometimes do not allow for it,” Obama also said.

Describing Israel’s security as “not a subject for dispute,” Obama pointed to the September 2016 signing of a $38 billion aid package for Israel, the largest ever provided by a U.S. administration to any country.

Separately, it was revealed Thursday that Obama in 2005 posed for a photo with Louis Farrakhan, the virulently anti-Semitic leader of the Nation of Islam movement and that the Congressional Black Caucus helped repress the photo. Obama was the U.S. senator from Illinois at the time.

Obama was, for better or worse, the face of liberal Zionism