Poland wants to ban the term ‘Polish death camps.’ There are historical inaccuracies on both sides of the debate.

(JTA) — The Polish parliament’s bill to criminalize the use of the term “Polish death camps” prompted an avalanche of criticism in Israel by officials and individuals who warned that it is excessive and risks stifling research on the Holocaust.

Following the bill’s passing Friday in the Sejm, or the lower house of the Polish parliament — it awaits the approval of the Senate and the president — Israeli Prime Minister Benjamin Netanyahu called the bill “baseless.” Historians, including some from Yad Vashem, Israel’s Holocaust memorial museum, joined him in opposing it.

In a statement, Yad Vashem said that whereas “there is no doubt that the term ‘Polish death camps’ is a historical misrepresentation,” the intended law nonetheless is “liable to blur the historical truths regarding the assistance the Germans received from the Polish population during the Holocaust.”

Less guarded protest in Israel alleged that some of Poland’s critics of the term Polish death camps are blurring historical truths, and that there is a need for better understanding of sensitivities around the issue in Poland, Israel and beyond.

Israeli centrist politician Yair Lapid, head of the Yesh Atid opposition party — and according to recent polls, the lawmaker likeliest to replace Netanyahu if elections were held now — had a lot to say on the topic on social media.

In a series of posts, Lapid said, “There were Polish death camps and no law can ever change that.” He added: “Hundreds of thousands of Jews were murdered without ever meeting a German.”

“Poland was a partner in the Holocaust,” Lapid also wrote.

His statements were historically inaccurate on several levels, according to Efraim Zuroff, a prominent historian on the Holocaust and the Eastern Europe director of the Simon Wiesenthal Center. 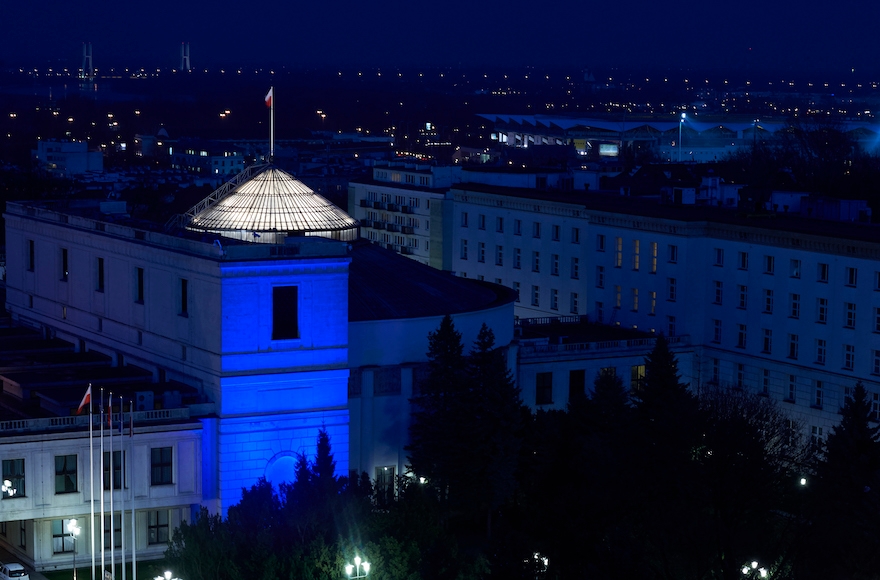 A view of Poland’s Sejm Parliament House in Warsaw in 2015. (Adam Nurkiewicz/Getty Images for Autism Speaks)

“I understand his anger, but Lapid fell in the trap that the Poles made for him, in a sense,” Zuroff said.

“Polish individuals may have been responsible for the death of many thousands of Jews,” he said, “but Polish state apparatuses were not integrated into the Nazi machine of genocide against the Jews, and in that Poland is actually an exception to many other countries in Nazi-occupied Europe.”

Claiming that “Poland was a partner in the Holocaust” is also untrue,” Zuroff said, because “there was no Poland” under German occupation. Polish sovereignty was dismantled and the country’s territory was co-opted under Nazi rule.

He said the claim that hundreds of thousands of Jews died in Poland without seeing a German is “absurd,” adding “I don’t know where Lapid got that figure from.”

According to Polish Chief Rabbi Michael Schudrich, no more than 2,500 Jews died at the hands of Poles during the Holocaust or immediately after it. Zuroff disputes the estimate: He believes the correct figure is “many thousands” of people, including in at least 15 towns and cities in eastern Poland, where non-Jews butchered their Jewish neighbors.

Zuroff said Lapid’s claim is also offensive to many Poles because in addition to killing 3 million Polish Jews, the Nazis killed 3 million Polish non-Jews. The remaining millions of Jewish Holocaust victims were either killed in the former Soviet Union or camps outside Poland.

Which is part of the reason that the “Polish opposition to the term Polish death camps in justified,” he added, though he also said he does not support criminalizing it.

So why are Israeli politicians and authorities on the Holocaust so outspoken in opposing it?

The reason, according to Zuroff, is that the bill is part of a larger effort by Poland’s right-wing government, led by the right-wing Law and Justice party, to dismiss “any criticism of how Poles behaved during the Holocaust.”

According to Zuroff, with the exception of the Netherlands, Poland was the only country in occupied Europe where resistance activists set up a special organization dedicated to saving Jews. But at the same time, Polish resistance groups, such as the Home Army, refused to accept Jews in many cases — and in others killed them.

“Everybody knows that many, many thousands of Poles killed or betrayed their Jewish neighbors to the Germans, causing them to be murdered,” Zuroff said. “The Polish state was not complicit in the Holocaust, but many Poles were. The country was a hotbed of anti-Semitism before the Holocaust, too. It’s foolish to ignore it.”

If that’s true, it hasn’t stopped Polish historians and officials from doing just that.

In 2016, a year after Law and Justice’s big election win, Polish Education Minister Anna Zalewska said there are “different scenarios” about what happened in Jedwabne, a town in eastern Poland where in 1941, locals butchered 1,500 to 2,500 of their Jewish neighbors, reportedly without interference from the Germans (revisionist historians in Poland have disputed this for decades).

In 2001, the publication of a book on Jedwabne by Princeton historian Jan Gross triggered a public debate on the issue. In 2016, he was summoned to appear before police for saying that Poles killed more Jews than they did Germans during the Holocaust. Gross was suspected of insulting the honor of the Polish nation, which is illegal in the country.

In a separate but not entirely unconnected debate, some leaders of Polish Jewry have accused the Law and Justice party of ignoring the rise of ultranationalists in Poland, which they said creates a security concern for the community and a “low point” in its history. Other Polish Jewish leaders have dismissed the claims as part of a “political war” against the government.

“Before Law and Justice won the election, there was a feeling that progress had been made, with successive Polish heads of state recognizing that, alongside the heroism of some Poles who saved Jews, others murdered them and betrayed them,” Zuroff said. “But it seems that now the Polish government is reversing course and it’s generating a lot of anger, as is visible in Lapid’s reaction.”

Poland’s embassy in Israel, for its part, quoted on social media what they called Lapid’s “unsupportable claims.” They show, an embassy spokesman said, “how badly Holocaust education is needed, even here in Israel.”