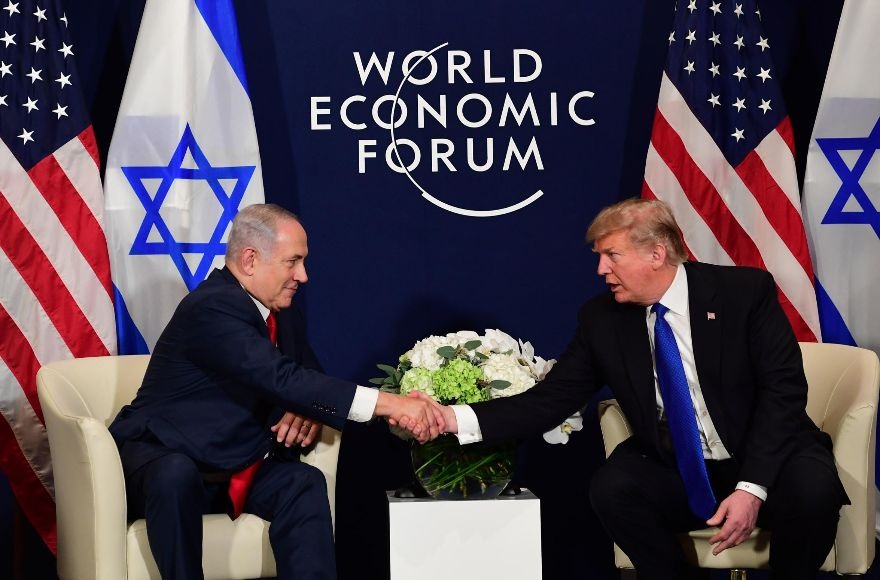 Netanyahu also called them “very creative” during an interview with CNN’s Fareed Zakaria onstage at the World Economic Forum in Davos, Switzerland. The interview, held Thursday, was broadcast Sunday on CNN.

“They have many, many abilities,” the Israeli leader said of Kushner and his team. “The thing the people don’t realize is that these people have made their mark in the markets, in real estate. Now this is not only a real estate deal, it’s fundamentally not a real estate deal but a problem recognizing Israel’s existence, the problem of not recognizing a Jewish state in any boundary. But it also has its real estate elements and they are, I have to say, very creative.”

Netanyahu said he is waiting to see what the Trump administration’s team will come up with and will not rule out anything until then. He also called on the Palestinians to “stop kvetching, you know. Let’s get on with it. Sit down, enter the room, start negotiating.”

The prime minister called it a “fantasy” to think any other country than the United States can broker a peace agreement. Addressing claims that the United States is no longer considered to be an honest broker by the Palestinians, in part over the Trump administration’s recognition of Jerusalem as Israel’s capital and subsequent threats to withhold aid to the Palestinians over their refusal to negotiate, Netanyahu said: “(I)f you want to enjoy the services of the great power, they can also summon economic resources and political support, I think it’s great for a potential peace deal. There’s no one else other than the United States, and I say this, I never said it differently.

“You know, I’ve had my ups and downs with American administrations. I never said, well, I’m not going to talk with this or that administration because, you know, they’re more favorable to the Palestinians than for Israel. You never heard me say that.

“You want peace? Get your act together. See what the United States’ offer is and get in a room and negotiate.”

Netanyahu told Zakaria that Trump “did a great service for peace because peace can only be based on truth, on reality, and denying the simple fact that Israel’s capital is Jerusalem is — pushes peace backward by creating an illusion, a fantasy. You can’t build peace on fantasy. You can have a vision, but it has to be grounded in reality.” He said that Jerusalem should remain united under Israeli sovereignty even under a peace agreement.

Netanyahu told Zakaria that the Iran nuclear deal is “deeply flawed,” saying that allows Iran to break out an arsenal of nuclear weapons as soon as it expires.

When asked by Zakaria about his political future due to several current corruption investigations, Netanyahu said that “no one is above the law” in Israel and that he is “confident that nothing will come of it because there’s nothing to come out.”