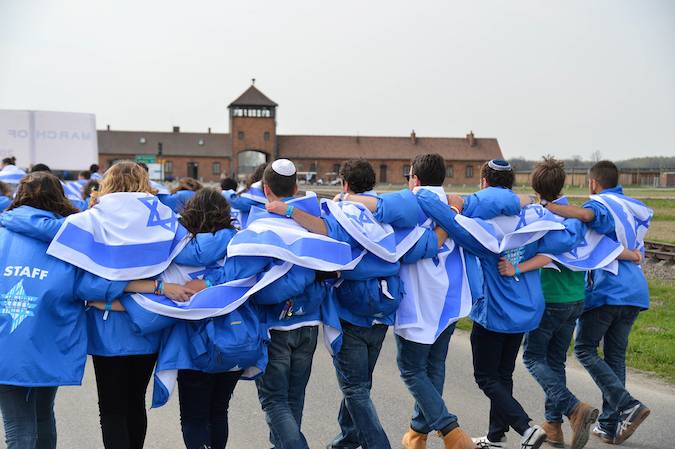 WARSAW, Poland (JTA) – Amid tensions between Poland and Israel over Polish legislation that would criminalize the use of the term “Polish death camps,” the presidents of the two countries will take part in the March of the Living at the former Auschwitz death camp.

Reuven Rivlin and Andrzej Duda agreed to jointly participate in the April 12 ceremony during a telephone conversation last month, the head of the Cabinet of the Polish president, Krzysztof Szczerski, announced Monday.

After the ceremonies in Auschwitz, talks between the two presidents will take place in Oświęcim.

The legislation passed Friday by the Polish parliament’s lower house, or Sejm, now will be taken up by the Senate and must also be approved by the president. It is designed to make clear that Nazi Germany was responsible for the crimes against humanity that took place in the camps.

Szczerski said the plans for the April ceremony and meeting was among the topics of his meeting Monday with the Israeli ambassador to Poland, Anna Azari, that was called after controversy erupted over the legislation.

Duda said Monday in an interview for Polish television that he was “appalled” by the Israeli ambassador criticizing the pending Polish law during the weekend ceremony for the anniversary of the liberation of Auschwitz.

“There were Poles who were prisoners of this camp, and in their presence these words were said. For me, this whole situation was surprising, I do not understand this situation,” he said.

Duda said that for the Polish side the law is clear and unambiguous, and the reaction of Israel may be the result of “distortions or misinformation.”

“We absolutely can’t back down. We have the right to defend the historical truth,” he also said.

On Sunday, Duda said in a statement that he would carefully review the legislation.

“Everyone whose personal memory or historical research speaks the truth about the crimes and shameful behavior that occurred in the past with the participation of Poles has full right to this truth,” he said.

The prime ministers of the two countries also agreed on Sunday to open an “immediate dialogue in order to try to reach understandings regarding the legislation.”

The March of the Living will traverse a nearly two-mile trail from the main gate of the former Auschwitz camp to the former Birkenau camp, where a ceremony commemorating the victims of the Holocaust will take place next to the ruins of the largest crematoria. This year the event falls on the 30th anniversary of the first march.