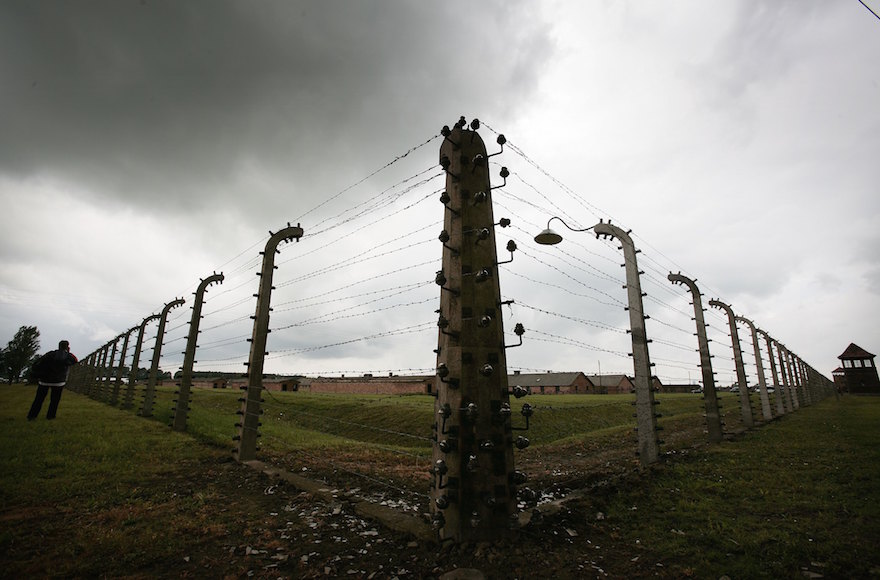 A visitor arriving for a memorial service of the victims of the former concentration camps of Auschwitz-Birkenau, Auschwitz, Poland, May 28, 2006. (Christopher Furlong/Getty Images)
Advertisement

WARSAW, Poland (JTA) – The debate over a Polish law that would criminalize the use of the term “Polish death camps” in referring to Auschwitz and other sites took a nasty turn when a television host joked that they should be called “Jewish camps.”

The comment comes amid tensions between Poland and Israel over the legislation, which is meant to assign sole responsibility for atrocities on Polish soil to the German Nazis who occupied the country.

Author Rafal Aleksander Ziemkiewicz, during the TVP2  show TVP Info, mocked critics of the legislation during a discussion with show host Marcin Wolski, who is also the director of TVP2.

“If we look at the percentage of involvement of countries that took part [in the Holocaust], Jews also were part of their own destruction,” Ziemkiewicz said.

Wolski responded: “Using this terminology, linguistically, we could say these were not German or Polish camps, but were Jewish camps. After all, who dealt with the crematoria?”

Wolski was apparently referring to Jewish inmates who were forced to dispose of gas chamber victims at the death camps.

Krzysztof Czabański, chairman of the National Media Council in Poland, on Wednesday called for an explanation from the president of Polish Television, or TVP, Jacek Kurski.

Meanwhile, the public broadcaster Polish Radio has launched the germandeathcamps.info website in Polish, German and English, which includes documentary evidence that death camps on Polish soil were operated by Nazi Germany. The website had been in the works for several months.

The legislation passed on Friday by the Polish parliament’s lower house, or Sejm, calls for prison sentences of up to three years for the use of the banned term. It now will be taken up by the Senate and also must be approved by the president.

Earlier, Ziemkiewicz on Twitter called Jews opposed to the changes in Polish law “scabs,” a term often used in anti-Semitic slurs in Poland.

“For many years I have convinced my people that we must support Israel. Today, because of a few scabby or greedy people, I feel like an idiot,” he wrote in his tweet, which was later deleted.

He was criticized by David Wildstein, deputy director of TVP1.

“Using the term scab is extremely nasty,” Wildstein tweeted. “This word is disgusting,”

Ziemkiewicz replied: “You are right David, a nasty word associated with all the negative traits attributed to the stereotype Jews, which is precisely why (I used it).”

Ziemkiewicz and Wolski also discussed a scandal in Germany in which car companies tested the effects of exhaust fumes on monkeys and humans.