Nevada welcomed this Israeli marijuana scientist. US immigration threw him out of the country. 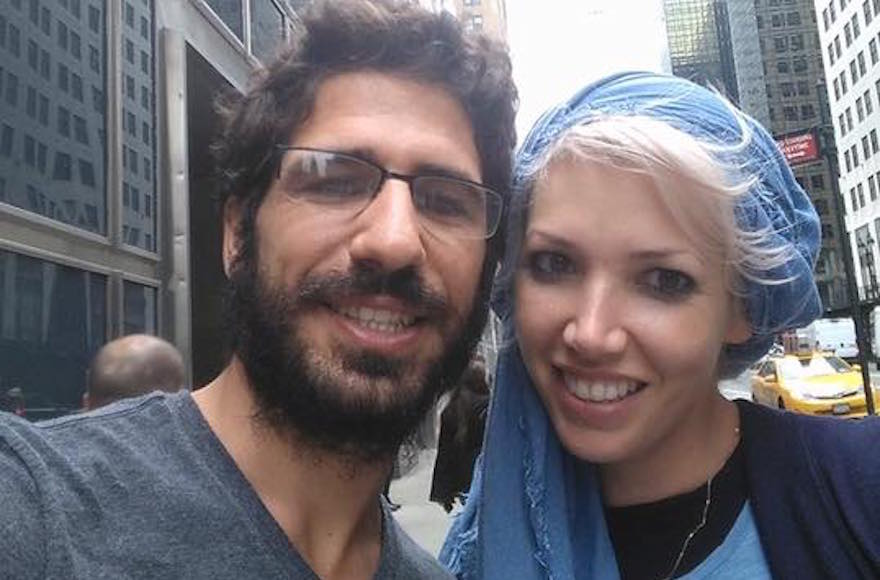 Shimon Abta and his wife, who asked not to be named, in happier times. (Facebook)
Advertisement

NEW YORK (JTA) — He came from Israel to the U.S. for work, got married, bought a house and expected to start a family right away. Then U.S. immigration authorities forced Shimon Abta out of the country for being a “trafficker of illicit drugs.”

Abta, an expert Israeli cannabis agronomist, was sent by his employer to consult with American companies in states where medical marijuana is legal. He was living in Las Vegas and met an American Jewish woman on JDate. They married last year and together started becoming more religious. Both in their 30s, they are eager to start a family.

But on Jan. 8, U.S. immigration officials told Abta to withdraw his application for permanent residency status and leave for Israel that very day or face arrest on felony charges of illicit drug trafficking. He was given two hours to pack and say goodbye to his wife.

Though he left voluntarily, if under pressure, when he landed in San Francisco to change planes, uniformed border patrol agents boarded his flight and escorted him off, handcuffing him in full view of other passengers, Abta told JTA. They confiscated his passport, cellphone and cigarettes, and refused to tell him where they were taking him, Abta said. They wouldn’t let him answer the phone as his wife called repeatedly — “frantically,” she told JTA.

Eventually they walked Abta through the airport to his connecting flight. Other passengers stared as the bearded Israeli, surrounded by uniformed officers, was ushered to the gate.

Now Abta is in Israel while his wife remains in Las Vegas finishing a master’s degree that will, ironically, equip her to counsel opioid addicts. They desperately want to be reunited, both told JTA in separate interviews.

Abta appears to be the lone cannabis industry worker expelled from the United States due to a gap between federal and state law. Federal U.S. law deems any involvement in the marijuana industry illegal, while Nevada is one of 29 states and the District of Columbia where credentialed doctors can prescribe cannabis. Israel is a worldwide leader in research on its medical uses and Abta’s former employer, Tikun Olam Ltd., is one of Israel’s largest suppliers of medical cannabis and a major presence in the U.S. market, providing its technology and expertise to growers and manufacturers here.

Specialists in immigration law and in the U.S. and Israeli cannabis industries say Abta is the only person they know of who has been caught in the breach between federal and state law.

“I haven’t heard of anyone being deported for that,” said Saul Kaye, founder and CEO of iCan: Israel-Cannabis, which promotes Israel’s industry overseas.

Abta’s “voluntary” removal comes at a time when the Trump administration has demonstrated great zeal for deporting foreign citizens.

The U.S. Citizenship and Immigration Service, or USCIS — the Department of Homeland Security arm tasked with processing Green Cards — sent Abta a letter dated Dec. 20 denying his application for a Green Card.

According to the letter, the “USCIS has determined that you are an illicit trafficker of controlled substances. Therefore, you are inadmissible to the United States. There is no waiver for this inadmissibility.”

His wife, who asked not to be named to preserve her privacy, said she nor her husband want him arrested, “and definitely not on false charges.”

“Everything he was doing was legal,” she said. “He was basically defamed, calling him a drug trafficker. He’s a scientist.

“Part of what made me fall in love with him is a real desire to improve people’s quality of life when they have chronic illnesses.”

Asked about Abta’s case, USCIS spokeswoman Maria Elena Upson said, “While many states have changed their laws to make the sale and possession of marijuana legal under certain circumstances, immigration law requires the agency to apply federal law in adjudicating these cases. … [A]s a federal agency, we are legally unable to make special considerations in these cases unless or until federal law is changed.”

Abta’s immigration lawyer, Ed Prudhomme, told JTA that “to threaten to file a trafficking felony charge against this guy was just unconscionable,” adding that ‘having the charge of felony trafficking would be a forever bar” to Abta’s returning to the United States. Prudhomme has filed an appeal and asked that Abta’s case be reopened.

That, experts say, will be an uphill battle.

“Now that he has left the U.S., it becomes much more difficult for him to get permission to return,” said Angie Junck, supervising attorney at the Immigrant Legal Resource Center, which advises lawmakers and attorneys on immigration policy. “It concerns me that he accepted his own removal. … You’re held to higher standards once you leave.”

Abta’s case illustrates “overreach and overcriminalization [of marijuana] at the federal level, using it as leverage against individuals,” Junck said. This is “a very difficult case. He has many hurdles to overcome.”

U.S. Customs and Border Protection spokesman Jaime Ruiz said that Abta can file a complaint online about his treatment by CBP officers or at the U.S. Embassy in Israel.

CBP “officers treat all travelers with integrity, respect and professionalism. CBP officers follow strict national standards regarding the transport and detention of travelers deemed inadmissible in the U.S.,” Ruiz wrote in a statement. “The use of restraints on detainees during transport is conducted in a manner that is safe, secure, humane, and professional. Without compromising their safety, CBP officers remain cognizant of an individual’s religious beliefs while accomplishing an enforcement action in a dignified and respectful manner. If a traveler believes that CBP officers acted unprofessionally, they can file a complaint. CPB tracks and records all complaints and resolves them if possible.”

Another CPB employee told JTA that handcuffing foreign nationals deemed inadmissible is “standard operating procedure. You don’t know how they’re going to react. They might try to flee. Use of restraints does not mean that you have committed a crime. It is a preventative measure.”

Abta — whose name in Hebrew is pronounced Avta and is occasionally spelled that way by family members — first came to the U.S. in April 2016 and lived in an apartment rented by Tikun Olam. Between then and January 2017, when he married, Abta made seven or eight round trips between Las Vegas and Israel on behalf of his employer, he told JTA. Each time he entered the United States on a B-1 visa, issued for work purposes, he told border patrol agents he was an agronomist for an Israeli medical cannabis company.

“It was never a problem,” Abta said.

A few months into his life in the U.S., one client, CW Nevada, which has licensed Tikun Olam’s cultivation technologies and intellectual property, told Abta he needed a Nevada state medical marijuana staff identification card to be able to come into their facilities. About a month after filling out a simple form, Abta received a state-issued medical marijuana staff ID. CW Nevada is listed as a cultivation facility and his employer, though he was never an employee there.

Abta and Prudhomme are trying to get a letter from CW and one from Tikun Olam making clear his relationship with each, they told JTA in separate interviews. But both companies are worried about legal trouble and thus far have left Abta out to dry, Prudhomme said.

Abta said he quit Tikun Olam in August. According to Prudhomme, the company said he was fired.

Once Abta married and knew he would apply for a green card, he returned to Israel to close his apartment because once individuals apply, they cannot leave the U.S. until they are issued travel documents.

Abta also claims he received legally compromising counsel from a woman he thought was an immigration lawyer. Abta heard about Eugenia Schall from an Israeli he met at a Las Vegas restaurant, he told JTA, and entrusted her to submit his Green Card application. Public records list Schall as president of Coast to Coast Visa & Immigration Service in Valley Village, California.

Abta said Schall told him he needed to submit a government-issued ID with the paperwork. The only one he had was the Nevada state medical marijuana staff ID. She submitted it.

But Schall is no attorney. The company website, which is mostly in Cyrillic, says it gets people visas to Russia, Ukraine, Belarus and Armenia.

“We are not attorneys and are not a law firm. We do not give legal advice,” the website says.

The company did not respond to several phone and email inquiries from JTA.

Had Abta “been working with immigration attorneys of good standing, they would have advised him to provide proof of status other than a medical marijuana ID card,” said cannabis industry analyst John Kagia, executive vice president of industry analytics at New Frontier Data. “Given that it’s not recognized at the federal level would raise eyebrows and additional scrutiny.”

On Sept. 30, Abta had his U.S.-issued travel document, called an advance parole, stolen from a Las Vegas hotel. He filed a police report.

In December, his brother-in-law contracted a life-threatening neurological disease and Abta rushed to Israel to be with his family. He wasn’t supposed to leave the country without the advance parole card. He had a police report but had not replaced the card.

Upon returning to the United States on Dec. 14, Abta was questioned for several hours by officials at the San Francisco airport but eventually released. The next day was his first Green Card interview. Five days later the government issued its letter of denial.

“I haven’t heard of another case like this,” Kagia said. “The lack of familiarity with legal cannabis within immigration enforcement agencies coupled with the proactively aggressive approach that the Department of Justice is taking means that participation in this industry will be looked at with greater scrutiny than under previous administrations.”

“This entire story is something we have no jurisdiction over,” Weiss told JTA. “I can’t come to the American administration and say they have mistreated him.”

He added: “The only thing Israeli consulates can do is help Israelis in case of emergencies. We can’t help them more than that.”

Now Abta is stuck in Israel rather than living with his wife of just a year. Both say they want only to be reunited. Last year they bought a five-bedroom Las Vegas house hoping to fill it with children. But that doesn’t seem likely anytime soon. Neither understands why.

His wife said she has started the process for making aliyah with Nefesh B’Nefesh, an agency that facilitates moves to Israel, but doesn’t really want to go.

“I have to finish my studies here,” she told JTA. “And this is my country.”

She has started a Change.org petition addressed to President Donald Trump and other elected officials. More than 850 people signed the petition in its first four days online.

At his immigration interviews, Abta “kept saying he worked for a company in Israel, didn’t do anything in America,” his wife said. “He was an expert witness on multiple cases for the police in Israel cracking down on illegal marijuana.

“If my husband is being labeled a drug trafficker because he had a marijuana staff card, then what is everyone in the state of Nevada?”