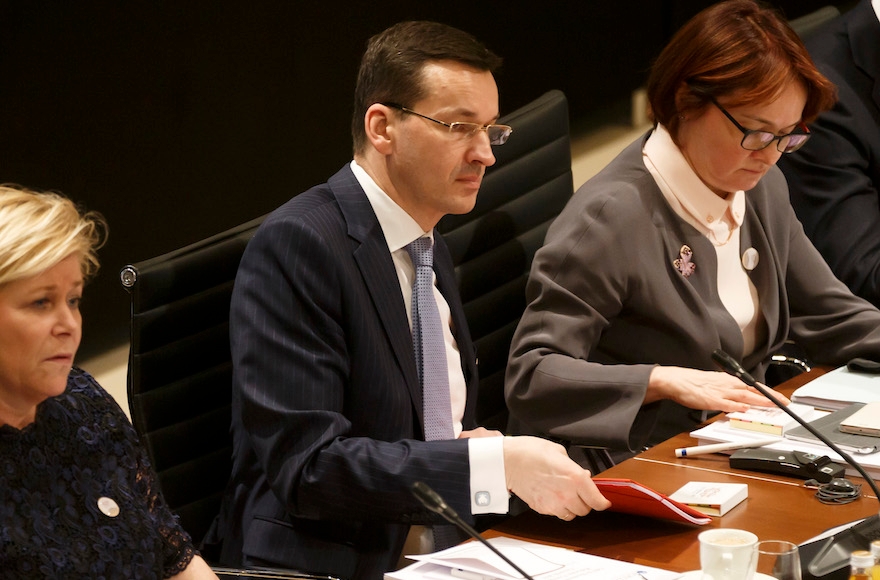 (JTA) — A chief rabbi of Ukraine called on the Israeli government to suspend school trips to Poland and have them in his country because of Warsaw’s new bill on Nazi crimes.

Rabbi Moshe Azman made the suggestion in a letter he sent to Education Minister Naftali Bennett on Thursday, a day after the Polish Senate passed a measure that proposes to outlaw rhetoric in which Poland is blamed for Nazi crimes.

The State of Israel and many Jewish organizations, including the Simon Wiesenthal Center, Yad Vashem and the European Jewish Congress, say the legislation risks blurring historical truth, as many Poles participated as individuals or as members of some resistance militias in murdering Jews or betraying them to the Nazi occupation forces. They also acknowledge that Polish authorities were not part of the Nazi campaign of annihilation against the Jews during the Holocaust.

Following the bill in Poland to “forbid telling the truth on what happened during the Holocaust in Poland,” Azman wrote, “I urge you to cancel the March of the Living for Israeli school students.” The march brings individuals from around the world to Poland and Israel to study the history of the Holocaust.

In 2015, Ukrainian President Petro Poroshenko signed a law honoring Ukrainian independence fighters, including militiamen complicit in the murder of tens of thousands of Jews. Another law signed by him makes it illegal to “insult” or “question the legitimacy” of these fighters.

“Ukraine has many places fit for a March of the Living: Babi Yar in Kiev, Drobytsky Yar in Kharkiv, Janowska concentration camp in Lviv and dozens of other places where Jews suffered and were murdered in a terrible tragedy,” he wrote. Azman said this “fine” was appropriate because “there is serious concern about anti-Semitism against Jewish communities and institutions” in Poland. He also called the legislation, which was drafted to counter the phrase “Polish death camps,” an “anti-Semitic legislation designed to silence history and witnesses to the Holocaust.”

Unlike in Poland, the Nazi occupation forces in Ukraine drafted thousands of local volunteers to actively assist in the murder of almost a million Jews in what is today Ukraine. The Nazis allowed the establishment of a Ukrainian SS division, the 1st Galician. The OUN resistance group to Russia fought for a time in coordination with the Germans, who did not allow Poles to possess arms. The OUN and UPA were also implicated in the murder of thousands of non-Jewish ethnic Poles, who were not Jewish.

In its annual report on anti-Semitism, Israel’s Ministry for Diaspora Affairs said that the number of recorded anti-Semitic attacks documented in Ukraine in 2017 surpassed the tally of all such incidents in the entire former Soviet Union. More than 130 incidents were recorded in Ukraine last year, the ministry told JTA, double the total for 2016.

At least one researcher on anti-Semitism in Ukraine, Vyacheslav Likhachev, who is affiliated with the Vaad Association of Jewish Communities and Organizations of Ukraine, dismissed the report as unprofessional and false.

The report also highlighted the glorification of Nazi allies by Ukrainian historians, including Vladimir Vyatrovich, the director of Ukraine’s Institute of National Remembrance. He told Radio Liberty last week: “It is a pity, but the results of the influence of [Russian] propaganda are felt even by documents of certain Israeli institutions.”