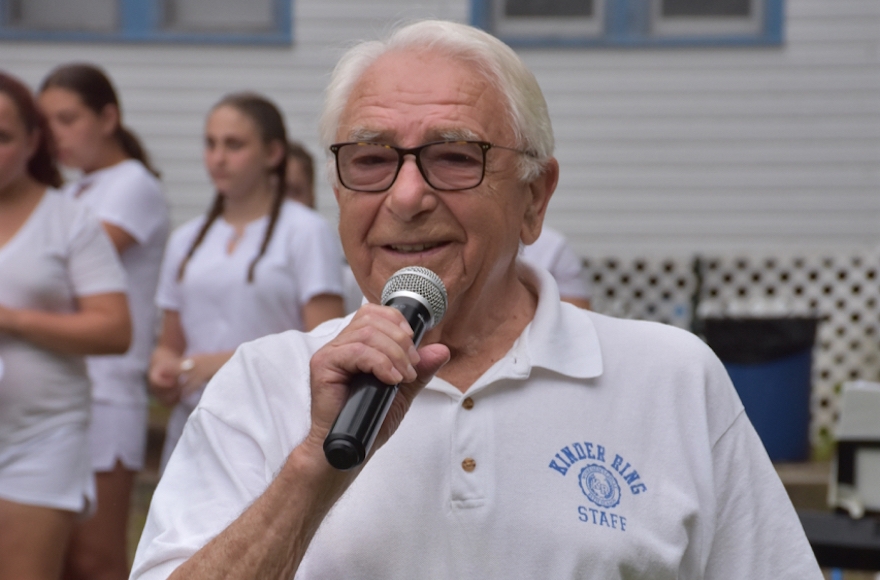 HOPEWELL JUNCTION, N.Y. (JTA) — The kids at Camp Kinder Ring mostly do what kids do at any Jewish summer camp. They hang out by the lake, play sports, goof off, find discreet places to, um, go on walks.

But for an hour each day, groups of Jewish adolescents here eagerly do what few others will: They cram into a small, oblong pagoda near the lake and sit quietly as Mikhl Baran, a 95-year-old man, teaches them Jewish history in an old-world Yiddish accent.

“So, he finally settled in Cairo, which is the capital city of …” Baran waits for a kid to say “Egypt.” On this August afternoon, he is teaching the campers about Maimonides, the 12th-century Jewish sage, but talking about him as if he were a personal acquaintance.

“In Cairo, over there, there’s a university at that time, and he managed to be very good friends with all the people around there, whether they were Arabs or Jews or Christians,” Baran says. “And he became very popular and famous, and he never took money from the poor people there. He only took money from the rich.”

The Eastern European native, born in 1922, isn’t quite old enough to have known Maimonides, but the campers and staff at Kinder Ring respect him as a fount of knowledge from a fading world. And the barrel-chested Baran, often sporting a tucked-in Kinder Ring polo shirt, has embraced that role with energy. He sees himself as the transmitter not only of Yiddish language, but also of Jewish history and culture to a new generation.

“I grew up speaking only Yiddish,” he said, sitting on a cozy screened-in porch at the camp with Millie, his wife of 72 years. “My mother taught me, and my bubbe taught it, and for 80 generations my people spoke it.” 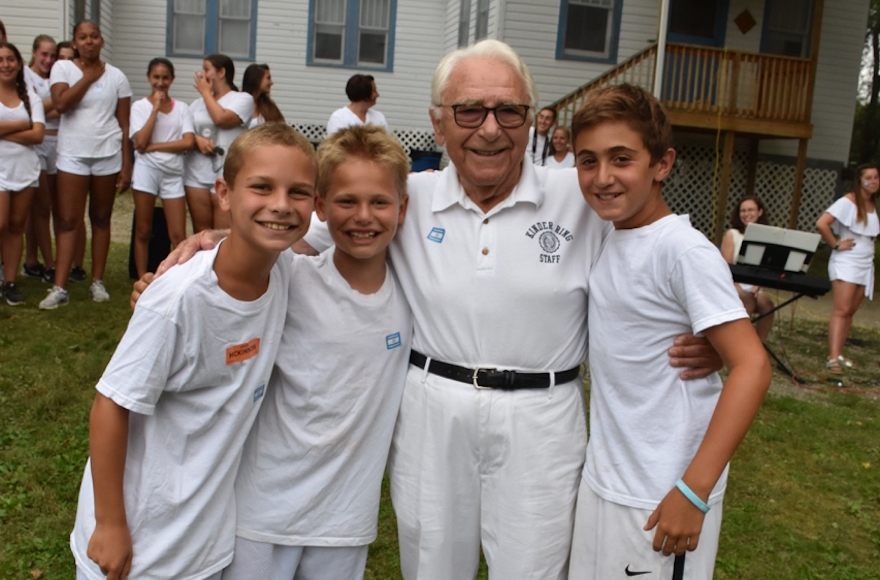 It’s a fitting task at Kinder Ring, which was originally a Yiddish-language camp started in 1927 by the Workmen’s Circle — a society founded in 1900 as a socialist aid organization for European Jewish immigrants. Nowadays, with spoken Yiddish largely relegated in the United States to haredi Orthodox neighborhoods and a small community of Yiddishists, not much of the “mamaloshn” is left at Kinder Ring, which has 325 campers aged 7 to 16. The camp anthem and a couple other songs are sung in Yiddish, the Friday night service is called “Shtiller” (Yiddish for “quiet”) and that’s about it.

“I ask them to call me Mikhl,” Baran says, noting that the name is the Yiddish form of Michael. “That’s already, in a sense, imbuing the idea that Yiddish is a great national treasure of the Jewish people.”

Even before the Yiddish-speaking world was depleted in the Holocaust, Baran was a defender of the language. He grew up in Oshmiany, a shtetl near Vilnius, where there was a rift between Yiddish and Hebrew speakers. So when Baran was moved from a Yiddish cheder school to a Hebrew school as a teen, he simply refused to speak the language. Two years later, his parents gave up and switched him back to a Yiddish school.

Baran was 17 when the Nazis took over in Lithuania. He managed to escape the ghetto and fled to the east, where he joined the Soviet Army and became, for lack of a better word, a badass. For four months, he served in a unit that went behind enemy lines and maneuvered through the snowy mountains on skis to capture Nazi officers. He was subsequently transferred to another unit fighting the Nazis. 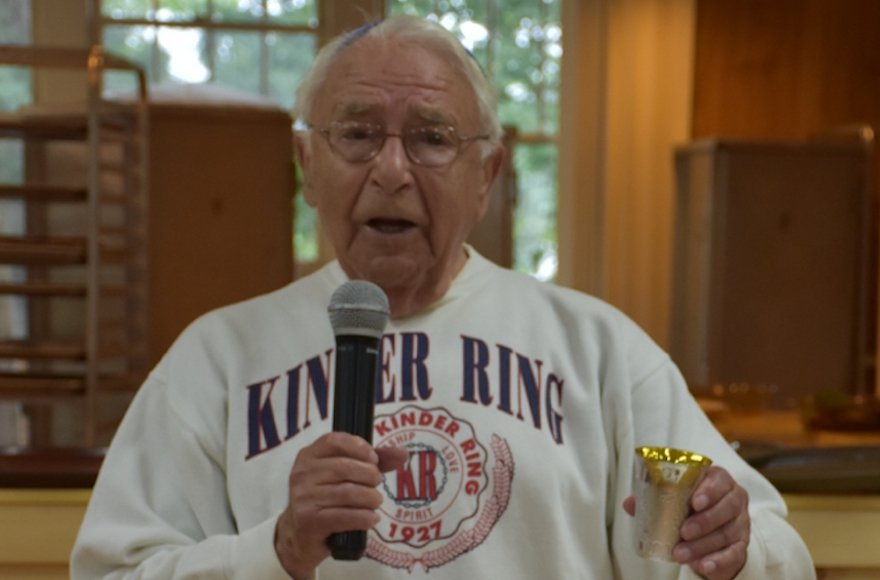 After the war, he found and married Millie, his childhood sweetheart, and in 1949 the survivor couple moved to New York. He took a position at a Workmen’s Circle school teaching Yiddish, and spent his first summer teaching at Kinder Ring in 1956. He also frequently appeared on the Yiddish radio station of the Forward, the Yiddish newspaper.

“At that time it was still a generation that could manage functionally through Yiddish,” he said. “There was a great deal of emphasis on perpetuating the Yiddish culture.”

Times have changed, however. Baran still teaches the kids Yiddish stories (in English), like Y.L. Peretz’s “The Seven Good Years,” about a peasant who gets a message from Elijah the prophet about seven coming years of abundance. But now much of his mission is to teach the fundamentals of Jewish culture, history and identity to kids who mostly don’t attend Jewish day school during the year.

“For me it’s very important to teach them at least the basic things of what Jewish values are, like tzedakah, the Spanish Inquisition,” he says, using the Hebrew word for charity. “I’m trying to impress upon them how important it is to not separate from the community. You’re part of the Jewish people.”

While some kids might disdain Jewish classes at a summer camp, the kids and staff all appear to love Baran and value his stories. The campers pay attention as he narrates Maimonides’ life.

Beyond respect for him personally, the assistant camp director, Jessica Rich, says it’s because the camp has a sense of its history. Its two color war teams last year, for example, were named after the iconic immigrant poet Emma Lazarus and Justine Wise Polier, the first woman justice in New York. Rich’s kids are the fourth generation of her family to attend Kinder Ring.

Baran, in turn, appreciates the reverence and attention he commands at the camp. But the elder statesman knows that there’s only so long he’ll be able to serve as a vessel from a lost world. And he isn’t sure what will come next.

“I worry a great deal because my generation is passing already,” he says. “It’s almost gone. And we are the remnant. If we will not tell the story, who will?”