Germany alone was responsible for the Holocaust, its foreign minister says 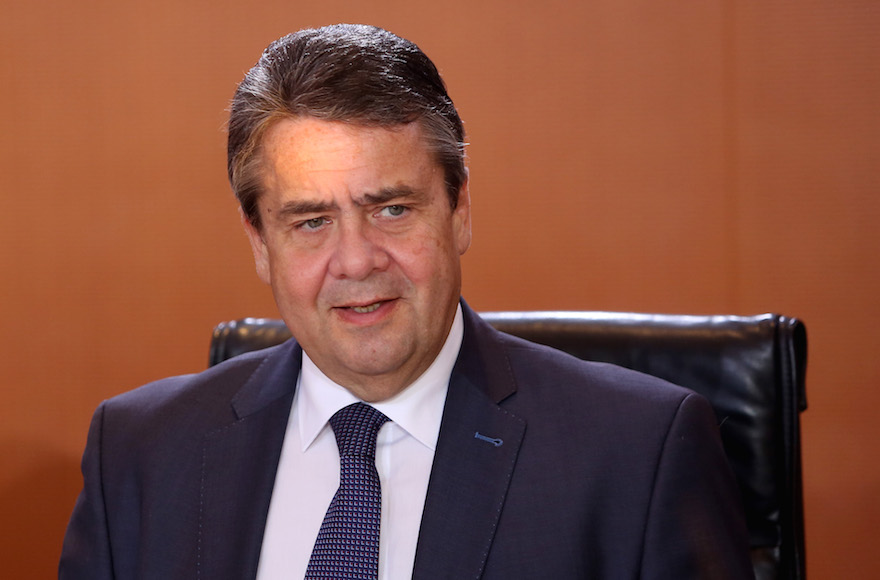 WARSAW, Poland (JTA) — Germany was responsible for the Holocaust, German Foreign Minister Sigmar Gabriel said on the heels of Polish legislation that seeks to distance the country from Nazi atrocities.

“Poland can be sure that any form of falsification of history, like the term ‘Polish concentration camps,’ will be unequivocally rejected and strongly condemned by us,” Gabriel said in a statement on Saturday.

“This organized mass murder was carried out by our country and no one else. Individual collaborators change nothing about that,” Gabriel also said.

Gabriel’s statement comes on the heels of the approval by both houses of the Polish Parliament of legislation that makes it illegal to accuse Poland of crimes committed by Germany during World War II. Poland’s president has 21 days in which to sign the legislation, which carries a three-year prison sentence, into law. President Andrzej Duda has said that he will carefully review the legislation, though it is expected that he will sign.

“Full settlement with our own history and with our own responsibility is for us Germans a permanent moral obligation in the face of crimes committed by the Germans and also by Germans in Poland,” said a statement published by the German Embassy in Warsaw over the weekend.

According to the statement Germany “will not allow any relativization.” Gabriel also added that “it is necessary for people who have experienced unbearable suffering as a result of the Shoah to be able to talk about these sufferings without restrictions.”

Also on Saturday, Poland’s Prime Minister Mateusz Morawiecki acknowledged that the legislation could have been timed better, instead of coming to a vote in the lower house of the Parliament, or Sejm, on the eve of International Holocaust Remembrance Day. He also said the laws’ intentions could have been better presented to the public.