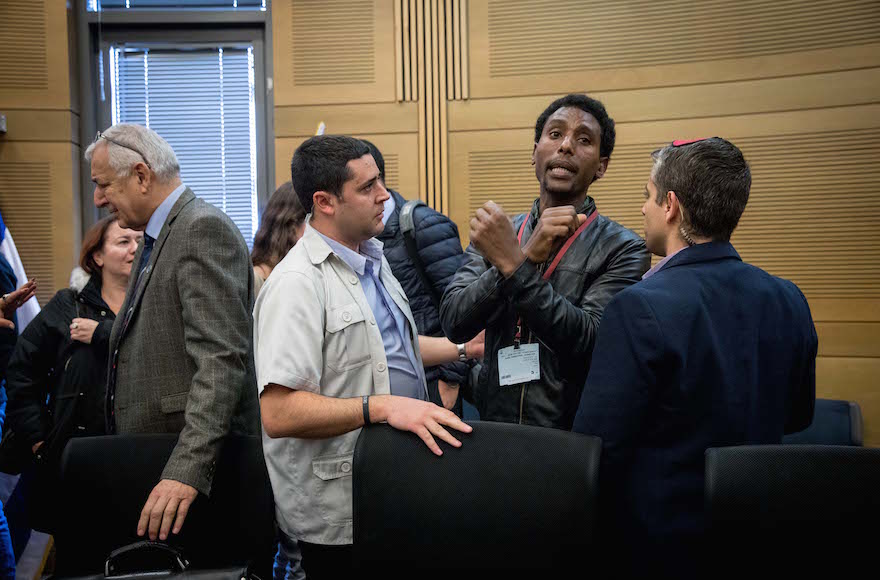 South Tel Aviv residents reacting at an Interior Affairs Committee meeting regarding the deportation of African asylum seekers at the Knesset, the Israeli parliament in Jerusalem, Jan. 29, 2018. (Miriam Alster/Flash90)
Advertisement

The notices started being distributed on Sunday, according to reports.

The first notices will be issued to single men without children, a total of about 20,000 men. The men, who have to renew their residence visas every two months., are receiving the deportation notices with their visa renewal. They have been threatened with indefinite incarceration if they do not leave.

Israel’s Cabinet last month approved a plan and the budget to deport thousands of migrants from Sudan and Eritrea.

Prior to that, the Population and Immigration Authority notified migrants from Sudan and Eritrea that as of Jan. 1, they must return to their own countries or to a third nation, or be sent to jail  until they are deported. According to the government plan, migrants who choose to leave by March 31 will receive a payment of $3,500 as well as free airfare and other incentives, according to reports.

For now, deportation notices will not be issued to women, children, fathers of children, anyone recognized as a victim of slavery or human trafficking, and those who had requested asylum by the end of 2017 but haven’t gotten a response, Haaretz reported.

There currently are up to 40,000 Eritreans and Sudanese living in Israel, including 5,000 children.

Human rights activists in Israel and major U.S. Jewish organizations have urged the government not to go ahead with the plan to force the migrants to choose between jail and deportation.

Hungarian Prime Minister Viktor Orban last year ran a government campaign against Soros, accusing him of lobbying to settle millions of migrants in Hungary and other European countries.