The youngest Schindler’s list survivor is still telling her story 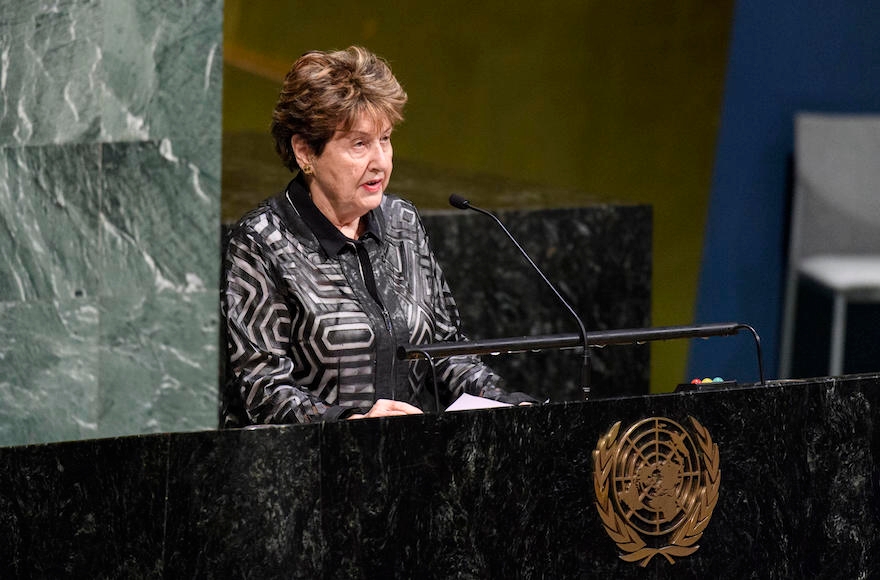 Eva Lavi, who was 2 years old when the Nazis invaded Poland, addressing the U.N. last week. (Courtesy of the Israeli mission to the U.N.)
Advertisement

She remembers how her mother made her hide outside in below-zero weather, clutching a standing pipe, as Nazis searched her home in Poland. She remembers her father telling her to swallow a spoonful of cyanide — better than death at the hands of the Nazis — only to have her mother object at the last minute. She remembers seeing her twin cousins shot to death as they ran up a hill at a labor camp.

Lavi was 2 years old when Nazi Germany took over her hometown of Krakow in September 1939. Now 80, she wants to make sure her stories aren’t lost after she’s gone.

“There was no childhood for children my age,” she said last week in a speech to the United Nations General Assembly following International Holocaust Remembrance Day on Jan. 27. “Regularly, we saw, heard and understood everything the Nazis were doing to us. At 6 years old, children were cynical old people trying to survive.”

Lavi is the youngest survivor to have been on Schindler’s list, the Jews saved by German industrialist Oskar Schindler and immortalized in Steven Spielberg’s 1993 film. Lavi was put in a ghetto in Poland with her family immediately after the Nazi takeover, transferred to a labor camp and then to Auschwitz.

After being saved by Schindler, who sheltered hundreds of Jews who worked in his kitchen goods and armament factories, Lavi lived a quiet life in Israel. She served in the army, lived on a kibbutz, worked as an administrative assistant and raised a family. She remembers the early years in Israel when survivors were disparaged as weak and passive. But as interest in the Holocaust increased, she became more vocal in recounting her experience. Now she speaks to groups at Yad Vashem, the Israeli Holocaust authority, and travels to Poland every year with a group of high school students.

“It’s true testimony from someone who was there. It’s not a story,” she told JTA in a separate interview last week, adding that once Israelis became interested in the Holocaust, “the survivors opened their mouths and began to tell the story. It’s not just a story. It’s the worst and cruelest thing that happened in the world.”

Although Lavi now regularly returns to Auschwitz, she says the experience still isn’t easy. Each time, she finds herself looking around in horror and crying. But by now she’s used to it.

“Every time I go, I cry here and there because it’s a terrible thing,” she told JTA. “Every person that went there saw the ovens, the gas chambers. Everything was real. It’s very scary, but because I’ve gone so many times, I take it differently. I don’t think about myself. I think about how the kids are reacting.”

Lavi also feels a sense of urgency in telling her story because she thinks the world hasn’t gotten better since she was liberated. There are groups that still seek to annihilate Jews and other minorities, she says.

And she called the Polish bill that would criminalize those who blame Poland for the Holocaust a “disaster.” Yes, she says, Poles were killed, too, at the Nazi death camps. But she adds that the Poles were no angels, citing Polish violence against Jews during and after the war.

“I was in Auschwitz, and there were Polish prisoners,” she said. “But what they say, that the Poles were all sweetness and light? No. In any case, they didn’t really like the Jews.”

As the Holocaust survivor population shrinks — Lavi was born just two years before the war — she sounds conflicted about how best to perpetuate Holocaust memory. On the one hand, she acknowledges that survivors’ stories are extensively documented. On the other hand, she knows nothing is more powerful than a firsthand account.

One way to transmit the experience, she says, is movies. She’s grateful for the research work that Spielberg did while making “Schindler’s List,” which won the Academy Award for best picture. One scene featuring her as a child, she says, is mostly accurate: Nazis separated her from her mother, but Schindler saved her by telling the guards he needed her small fingers to operate machinery. She believes that movie and those that have followed play a positive role in educating people about what happened — even if some are fictional.

“They did a lot of movies that had influence,” she told JTA. “They engaged the heart, even if they’re not true, but they have to be faithful to truth.”

Israeli U.N. Ambassador Danny Danon, who invited Lavi to address the United Nations, said the speech was an increasingly rare opportunity for international diplomats to hear about the atrocities of the Holocaust firsthand.

“With the number of Holocaust survivors who can testify to the horrors they witnessed dwindling every day, it is of utmost importance that we ensure that their story is told before it is too late,” he said in a statement, adding that with the speech, he and his office “hope to have played a small part in relaying her important message and focusing the U.N. on fulfilling its original mandate from when it was founded in the aftermath of World War Two.”

After decades of telling her story around the world, Lavi says addressing the United Nations gave her a sense of closure. For years she has carried guilt for surviving where so many perished. But with this speech, she said, she achieved something to justify her life.

“It was very hard to be a child survivor,” she told JTA. “I felt guilty. I began to talk to God: Why did he save me? I imagined my Jewish brothers, me and them together, we’re walking, and then God pulls me out. Now that they’ve sent me to the U.N. to speak in front of the world, it’s as if I did something to satisfy God after my death.”