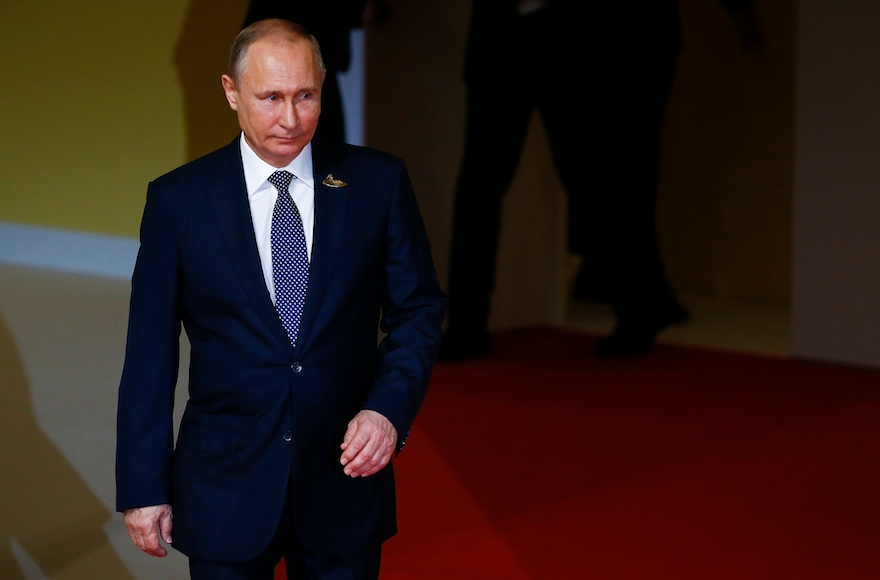 He inherited the 1 1/2-bedroom apartment from his former high school German teacher, Mina Yuditskaya Berliner, who died in December at 96, Ynet reported. Berliner left the apartment to Putin via the Russian Embassy. It was Putin, in fact, who bought the apartment for her in 2005.

Berliner immigrated to Israel from the Soviet Union in 1973. But she had followed her former student’s rise through the political ranks in Russia.

According to Ynet, Putin and his teacher were reunited in 2005, when the Russian president visited Israel. She had asked the Russian Embassy whether she could attend a reception in Putin’s honor. She joined World War II veterans for their meeting with Putin in Jerusalem, but afterward he invited her to have tea with him in private.

Shortly after the meeting Berliner, who was a widow, began receiving gifts from the Russian president: a watch and Putin’s autographed 2000 biography. Shortly after that, an employee of the Russian government showed up at her doorstep and took her to see some apartments in the center of Tel Aviv, she told Ynet.

“I told him all I needed was a flat that would be near the bus station, the market and to kuppat holim,” she told Ynet in an interview about three years ago, using the Hebrew term for a health maintenance organization. “It all happened fast from there on; a few months later the movers came to my [rented] apartment in Florentine [in southern Tel Aviv], packed everything up and moved me.

“When I received the apartment, I cried,” Berliner told Ynet. “Putin is a very grateful and decent person.”

According to Ynet, Berliner had not been in contact with Putin since receiving the apartment, but sent him birthday greetings every year through the Russian media.

The Russian Embassy sent a representative to the funeral and covered the costs of her burial, Ynet reported.

A portrait of the strongman as a young judoka