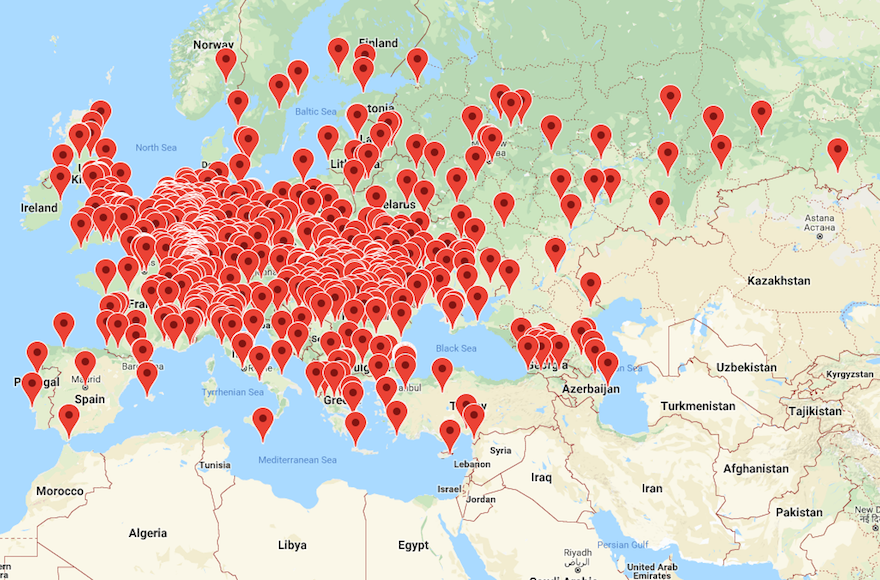 (JTA) – A new British organization has created an incredible tool that should fascinate anyone remotely interested in European Jewish culture: an interactive map of all of the continent’s 3,318 remaining synagogues.

The map catalogues the European synagogue buildings that are still standing — but less than a quarter of those are not actually used as synagogues today.

For instance, one synagogue on the map in Poznan, Poland, today houses a swimming pool. Another in Krakow, Poland, is a bar.

But the map includes filters that allow readers to see which are still used as synagogues and which have been converted into a range of other things. A “present usage” drop down menu contains nearly three dozen different categories, ranging from “Bakery” to “Mosque” to “Sikh Gurdwara.”

Readers can also filter the synagogues by country. For example, they can isolate all of the historical synagogue buildings in Germany, then hit a filter and see which of those are actually being used as synagogues by German Jews. 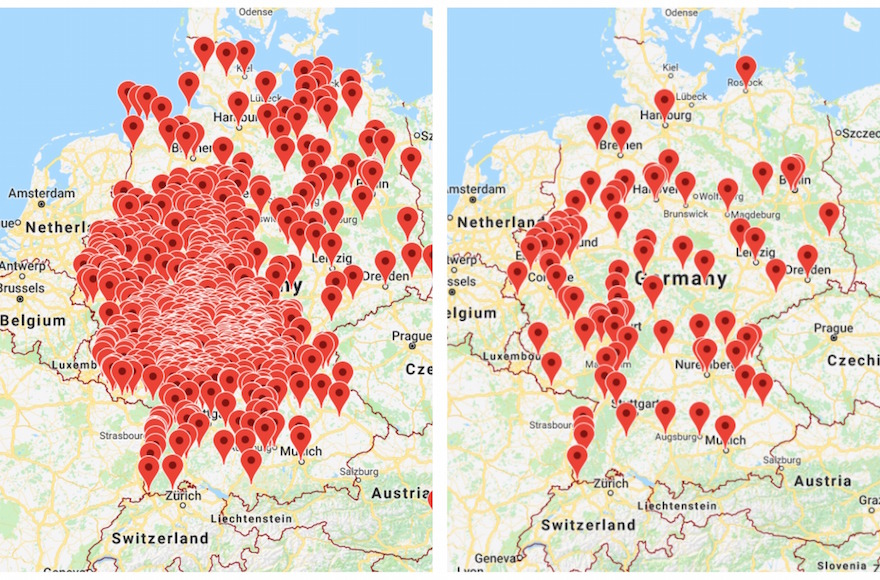 On the left is a view of all the historic synagogue buildings left in Germany. On the right is a view of those still being used as synagogues today. (Screenshots from Foundation for Jewish Heritage)

That gap between then and now is particularly revealing in a country like Spain, which expelled all of its Jews during the Inquisition in the 15th century. 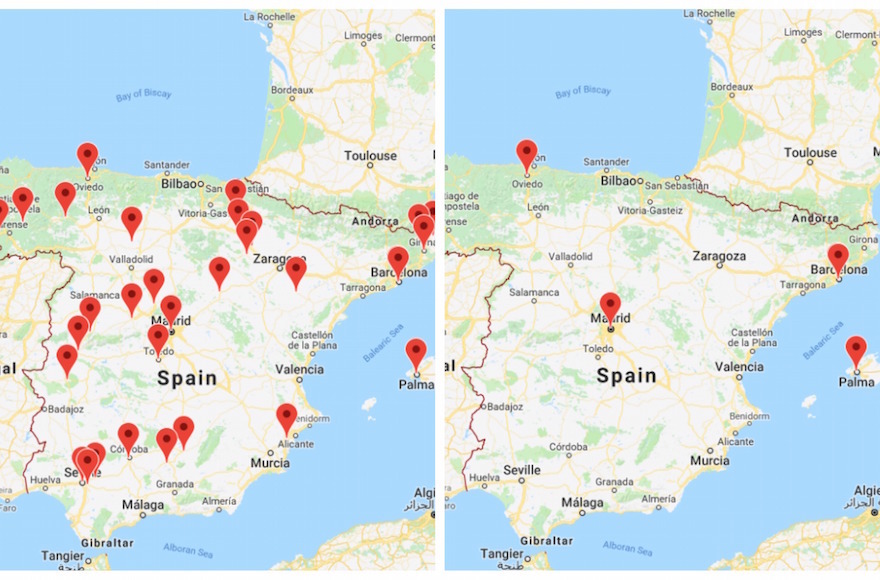 Historic synagogue buildings in Spain are shown at left; ones being currently being used by Jews as houses of worship appear on the right. (Screenshots from Foundation for Jewish Heritage)

Readers can click on each individual synagogue and learn about the characteristics of each building, from the year it was built to its construction material.

The map was created by the Foundation for Jewish Heritage, which was registered in the United Kingdom in 2015 and aims to help preserve and restore endangered European synagogues. The organization commissioned the Center for Jewish Art at the Hebrew University of Jerusalem to carry out the project ahead of the foundation’s launch. It took a year and a half to complete.

Beyond providing researchers a first-time continental overview, it also aims to serve as a reference point for philanthropists, said the foundation’s chief executive, Michael Mail. The foundation identified some 160 synagogues in imminent risk of being ruined beyond the point of restoration.

“It allows for restoration efforts to become strategic,” Mail told JTA. “Donors can see where they are most needed.”

On the eve of World War II, Europe had some 17,000 synagogues. According to the foundation’s database, fewer than 850 remain throughout the continent and in Russia, which is included in the map.

“We are quite simply losing our history,” said Mail, who is also a novelist.

Mail said the foundation has made progress on preservation projects at two synagogues: the Merthyr Tydfil Synagogue in Wales, and the Great Synagogue of Slonim in Belarus. The foundation aims to empower local authorities to restore or preserve synagogues rather than perform the works itself, he said.

At the Merthyr Tydfil Synagogue, a striking Gothic structure that became a gymnasium following the local Jewish community’s disappearance in the 1980s and is now for sale, the foundation is in talks with authorities on opening a museum of Welsh Jewry. In Slonim, the foundation is conducting a feasibility survey to devise a preservation strategy with the mayor’s office.

The foundation has raised more than to $150,000 for these projects, the study and another program for preserving synagogues in Syria and Iraq.