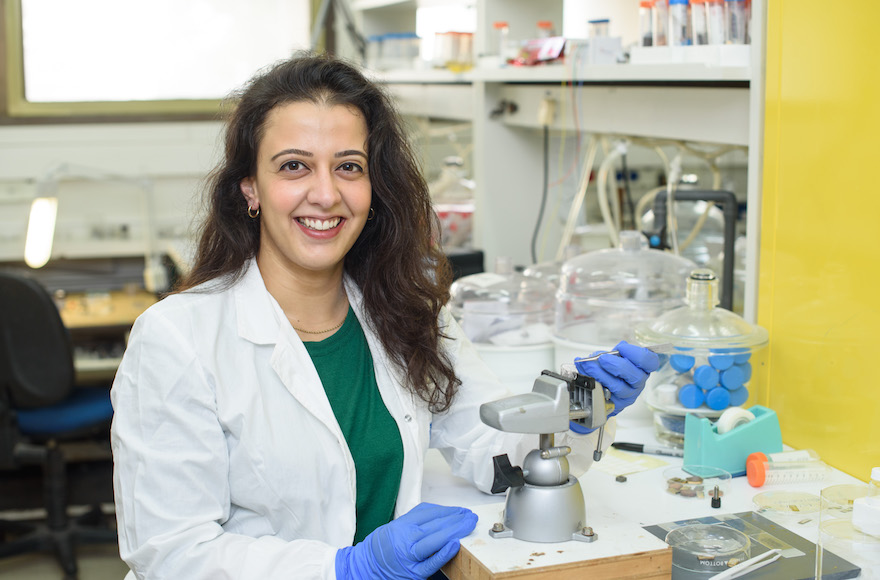 Elena Meirzadeh, who is pursuing her doctorate at the Weizmann Institute of Science, is studying the properties of crystals with an eye toward applications ranging from airplane wing de-icing to improving cloud-seeding techniques to increase rainfall. (Courtesy of Weizmann Institute)
Advertisement

This story is sponsored by the American Committee for the Weizmann Institute of Science.

When Elena Meirzadeh immigrated to Israel from Iran with her family at the age of 12, her priorities were perfecting her Hebrew and acclimating to life in a new country.

Despite the language barrier and culture shock at moving from the Islamic Republic to the Jewish state, Meirzadeh excelled at her studies and decided she wanted to become a scientist.

While pursuing an undergraduate degree at an Israeli university, she attended a two-week summer program at the Weizmann Institute of Science in Rehovot, Israel. It was there she discovered the joy of being in a top-notch laboratory working alongside established scientists.

“It was love at first sight,” recalled Meirzadeh, who is now pursuing her doctorate at Weizmann’s Feinberg Graduate School, working in the Department of Materials and Interfaces. “I knew this was where I wanted to pursue my master’s and doctorate. It was the best decision of my life.”

Meirzadeh is one of the six exceptional scientists pursing advanced degrees at the Weizmann Institute who will be traveling to the United States from March 11 to 16 for the school’s fourth Scientists of Tomorrow Tour.

The graduate students – who are among the top crop of Israel’s newest generation of science, math and industrial innovators – will break up into pairs and visit Florida, New York, Colorado, California, Chicago and Cincinnati. They will be sharing their personal stories and talking about their research in biology, quantum physics, artificial intelligence and other fields.

The students represent “a new generation of creative and original researchers in the natural sciences and mathematics,” said Lawrence Blumberg, the graduate school’s New York-based board chairman. “They are our future scientific leaders.”

The idea behind the tour is to forge personal connections between the university’s young scientists and supporters – as well as potential supporters – in the United States.

But the tour isn’t just about fundraising. It’s also an opportunity to give these promising students invaluable experience presenting their research to lay audiences. Helping scientists learn to communicate effectively about their research is an essential component of future success for men and women whose livelihoods may partially depend on their ability to articulate the importance of their work and secure financial support.

The students participating in this year’s tour have a wide range of expertise.

Amitai Mandelbaum, a doctoral candidate in molecular genetics, is studying microRNAs – small, non-coding molecules that regulate gene expression. He is examining the role of microRNAs in normal cell function, as well as how abnormal microRNA behavior may contribute to the development of diabetes. Mandelbaum is also a program leader at Weizmann’s Davidson Institute of Science Education, where he teaches science to Israeli high school students.

One of the things Mandelbaum says he loves about the Weizmann Institute is the unusually high level of institutional support the school provides – including full scholarships for all students.

“School administrators don’t want you to waste your time on logistics,” Mandelbaum said. “They want you to do the research, the experiments. You can really excel, and your research can proceed faster and deeper as a result.” 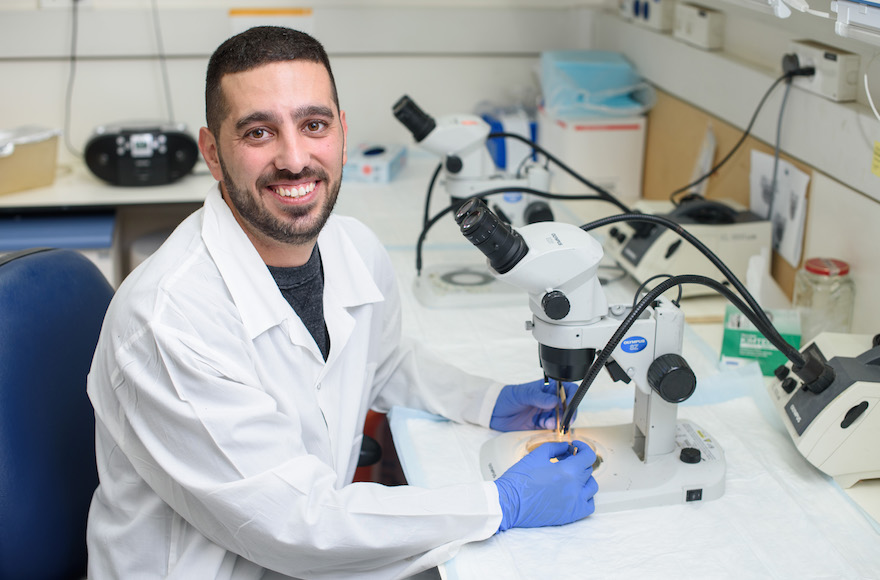 The next time you climb into an autonomous car – maybe in the not-too-distant future – you might be relying on the research of Heli Ben Hamu. Now pursuing a master’s degree in computer science and applied mathematics, Ben Hamu is focused on geometric deep learning, a relatively new field with significance for artificial intelligence. She is developing a neural network that generates 3-D models of the human body – work that has practical applications for the development of self-driving cars and the interpretation of medical images.

Tel Aviv resident Shir Nevo is a Weizmann doctoral student in immunology. She’s studying the molecular basis of auto-immunity, a misdirected immune response where the body attacks its own tissues.

Nevo’s research centers on thymic epithelial cells, or TECs, which are critical to the development of different types of T cells – the “workhorses” of the adaptive immune system. Under normal circumstances, a molecular mechanism involving TECs prevents certain T-cell populations from going off-script and mounting an autoimmune response. When this molecular mechanism breaks down, it can lead to the severe autoimmunity.

Can pharmaceutical companies develop drugs less expensively and more effectively? Efrat Resnick, a doctoral candidate in chemical biology, is working on ascertaining more efficient ways of discovering and evaluating the compounds that offer specific biochemical and biomedical benefits. That, in turn, can help pharmaceutical researchers more quickly identify the most promising compounds on which to base their drugs. Resnick is particularly interested in compounds that attach irreversibly to proteins and thereby produce long-lasting medicinal effects.

For her part, Meirzadeh is examining how defects and imperfections influence the properties of crystals. She is using advanced electrical measurement techniques to learn about crystal structure and how it might affect everything from ice buildup on airplane wings to ways to improving cloud-seeding techniques to increase rainfall.

Meirzadeh said she’s excited about the upcoming U.S. tour because it will give her the opportunity “to show people the more exciting things about science, what impact it can have on our daily lives.”

Dr. Ami Shalit, the academic secretary of Weizmann’s graduate school, said the students going on the tour all have an infectious passion for science.

“They have a spark in their eyes when they talk about their research – it’s a little like listening to Beethoven,” Shalit said. “No matter how many times they present their work, they bring up things you never thought of before. They captivate the audience.”

Blumberg said the students are ideal ambassadors not just for the Weizmann Institute but for Israel.

“Through the tour, audiences across the country learn about cutting-edge science at the Weizmann Institute,” Blumberg said, “but they also learn about Israel’s role as the ‘Startup Nation’ – a science and technology hub that is changing our world for the better.”