Aide to Polish president says Jews were ‘passive’ during the Holocaust 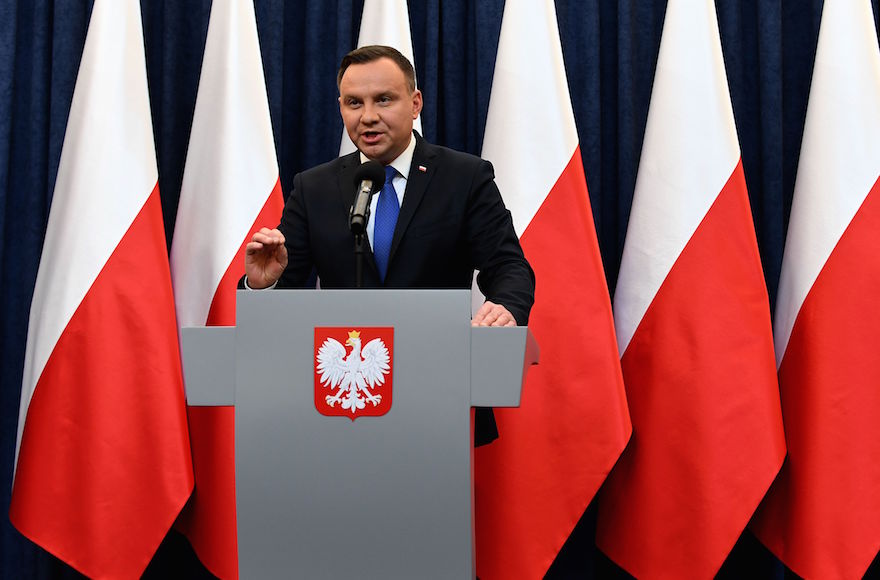 Poland's President Andrzej Duda giving a press conference in Warsaw to announce his plans to sign into law a controversial Holocaust bill which has sparked tensions with Israel, Feb. 6, 2018. (Janek Skarzynski/AFP/Getty Images)
Advertisement

(JTA) — Israel has reacted strongly to a Polish law limiting rhetoric about the country’s involvement in the Holocaust because of a “feeling of shame at the passivity of the Jews during the Holocaust,” an advisor to Poland’s president said.

Polish President Andrzej Duda signed the legislation passed by both houses of the Polish legislature on Tuesday. He also sent it on to Poland’s Constitutional Tribunal for review. The law would levy up to three years in prison to anyone who blames the Polish state or nation for crimes the law says were perpetrated exclusively by Nazi Germany during World War II.

Andrzej Zybertowicz, an advisor to Duda, said in an interview published on Friday in the Polska-The Times that anti-Polish sentiment in Israel comes from a “sense of shame for passivity during the Holocaust.” He added: “Some people explain that the brutal crackdown on Palestinians or Hezbollah is also a form” of acting on their shame.

Israelis, he said, repeat to themselves,  “We will never go like sheep to slaughter again.” Israelis regard the Holocaust as “also a monstrous humiliation —  that they did not fight, did not resist.”

He also said that there were Jews who collaborated with the enemy, who sold out and murdered fellow Jews.

Zybertowicz tweeted a link to the article on Friday.

Israel, the United States and scholars of the Holocaust warn that the Polish law could suppress an honest accounting by Poles of their countrymen’s role in the Holocaust.