Bringing joy and therapy to hospice patients through Jewish music 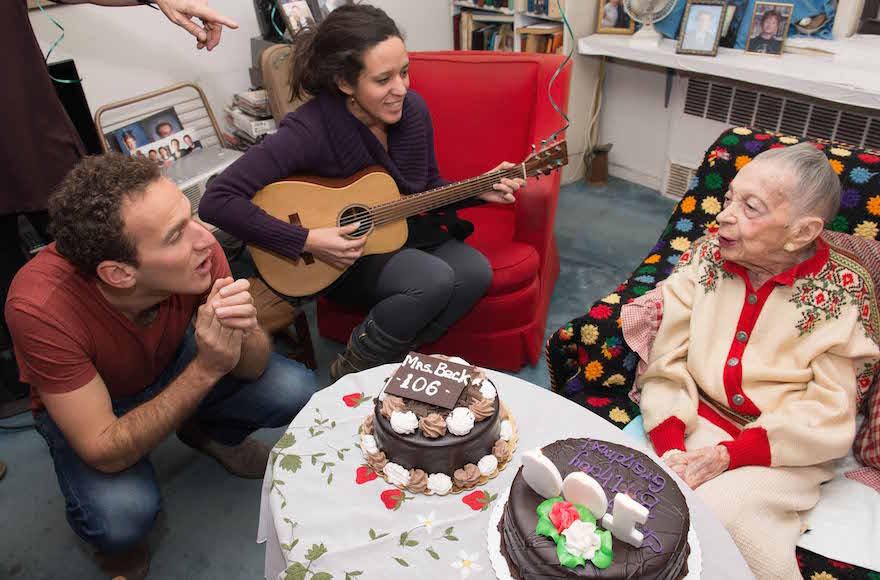 This story is sponsored by MJHS Health System and UJA-Federation of New York.

NEW YORK — It’s a bitterly cold winter morning in Brooklyn, but Brenda, a 101-year-old woman in a Jewish hospice facility suffering from severe short-term memory loss, has a special group of visitors show up in her warm room.

Joelle Missry, a creative arts therapy intern, arrives with her guitar slung over her back and with her licensed music therapy supervisor by her side. She sits beside Brenda’s bed.

For the next 20 minutes, Missry holds Brenda’s hand and sings a combination of old Yiddish songs with help from her team and Brenda’s home health aide, who has learned some of the songs. But Brenda is largely sleepy and unresponsive, despite Joelle’s best efforts. After going through a songbook that ranges from “You are My Sunshine” to the Yiddish favorite “Tumbalalaika,” the group gets up to leave.

Just as they’re about to exit, however, Brenda’s eyes pop open. Suddenly fully alert, she begins to croon the Yiddish standard “Bai Mir Bist Du Shoen,” looking straight at Missry. She goes through the song a few times, tapping her feet and looking very pleased.

This is the kind of moment for which the music therapy program at MJHS Health System, a Jewish health care service provider in New York, was designed.

Music therapy is considered so important that MJHS Hospice now employs five full-time music therapists, as well as interns and part-time workers, all trained in a songbook that covers many of the languages and cultures in New York’s five boroughs. For aging Jews, that means the Yiddish and Hebrew songs that bring back warm memories. The MJHS songbook ranges from American standards like “What a Wonderful World” to Hebrew songs like “Jerusalem of Gold” and “Hatikvah.”

The therapy itself is considered an “integrative therapeutic intervention” – non-medical treatment that can have therapeutic results. Studies show that a joyful singing experience can ameliorate pain and a patient’s symptom burden without the use of drugs. It has an exercise component, encouraging healthy physical movement, such as feet-tapping and hand-waving. Hospice workers say it also can help relax patients before treatments, like a blood draw or IV infusion, that might cause agitation or anxiety.

A growing body of scientific evidence supports the use of music therapies in various medical settings, from neonatal intensive care units to end-of-life and palliative care situations. Music is shown to boost immunity and reduce stress and pain by increasing the antibody immunoglobulin A and other immune system-boosting cells while reducing the stress hormone cortisol.

“We’ve found compelling evidence that musical interventions can play a health care role in settings ranging from operating rooms to family clinics,” Daniel Levitin, author of the recent book “This is Your Brain on Music,” told the American Psychological Association recently. “This is one reason why music is associated with relaxation.”

For Alzheimer’s patients specifically, a program called Music and Memory, featured in the documentary film “Alive Inside,” shows that music therapy can decrease medication usage in patients. The theory is that music can trigger a kind of deep right-brain response, something beyond the reach of linear memory, so that even a patient who can’t string a sentence together might be able to remember or at least respond to lyrics from a song. 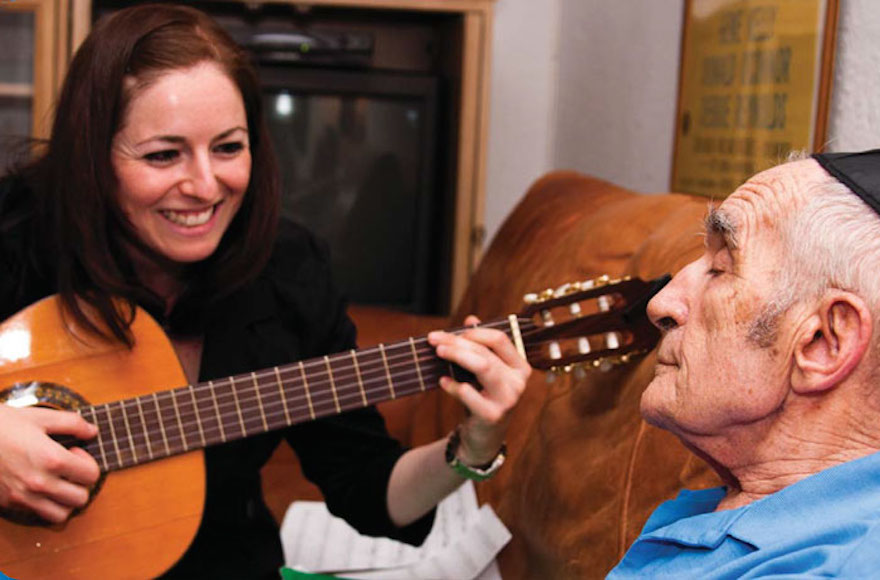 Music therapy isn’t just about singing old songs. The therapists are trained to deal with issues like hearing loss or agitation, as well as cultural sensitivities.

For some of the elderly Jewish patients under the hospice care, there’s an extra benefit to the treatment.

“Often with Holocaust survivors there is a reticence on the part of patient and on the part of family members to allow pain medication,” said Toby Weiss, director of cultural sensitivity and Jewish programming for MJHS Hospice and Palliative Care. “There is a lack of trust and there is a prior history of trauma when it comes to medical issues and health care interventions. So when a patient is experiencing pain, as an example, if a music therapist starts to play a Yiddish song or a lullaby or something else from the patient’s childhood, the vital signs change, their affect changes.”

Beyond easing pain, the experience of bringing a patient some music from their early life can be powerful bonding tool, allowing a potentially tense family to come together — part of the core mission of hospice care.

“I’ve done some of the Yiddish songs with the families present, and the family didn’t know the person knew this song,” said Meredith Ferrel, creative arts therapy Team leader at MJHS Hospice. “You have that chance to have the family connecting or singing together. It’s an added gift that the loved one is giving the family Yiddish-language songs at the end of life and sharing songs with their grandchildren. There is a celebration of culture.”

Music therapy often offers family members a chance to see a side of the patient that might long have been in retreat. Ferrel recalled how one woman invited all her neighbors into a music therapy session to “meet” her husband with dementia — the music unexpectedly had brought out a glimmer of his former personality.

Charla Burton, a music therapist with MJHS Hospice, said the music sometimes induces primal emotions, catharsis and joy that makes the experience especially meaningful for patients and their families.

“Some people will respond to hearing ‘Hava Nagila’ as if they’re at a bar mitzvah or wedding!” she said.

(This article was sponsored by and produced in partnership with MJHS Health System and UJA-Federation of New York to raise awareness and facilitate conversations about end-of-life care in a Jewish context. This article was produced by JTA’s native content team.)